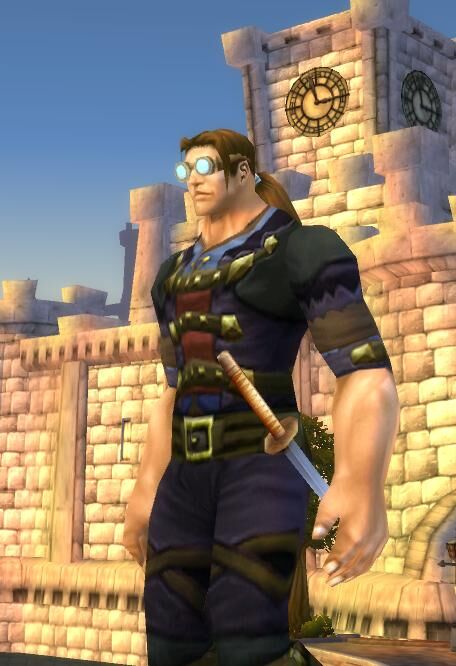 Zamza's most noticeable characteristic would be the flight goggles that are, at all times, pushed up to rest against his forehead. He wears his light brown hair in a simple ponytail and a teenager's stubble on his chin, even though he's twenty-eight. His eyes are of a sky-blue color, and he is almost always offering a warm, inviting smile.

Zamza has only one wish, and that is to soar through the skies in his airship, The Sierra. Although he can defend himself when need be, he's not a huge fan of confrontation, or fighting in general for that matter. Zamza is incredibly shy around women and has no idea how to act around them, and for that, he gets teased quite a bit. Despite that, he's quick to make friends- and very slow to make enemies.

The Pilot is somewhat of a workaholic, and always seems to be behind on his dues and debts. Even though he works with Langley Firearms and tends to the bar at The Jester, he's always disappearing without a word on deliveries or odd jobs that require his expert piloting. Zamza caters to both the Alliance and Horde in his work, using the Goblins as a medium for communication between the races, at a price, of course. For this, Zamza was given a Neutrality Badge, a white badge with gold trim and a hammer and wrench crossed in the middle. This badge means he is a neutral party, it has saved his skin from the Horde a few times.. not always ((Think of it like an army medic)).

Born into a Sailor's family in Southshore, Zamza was destined to become a sailor, just like his old man. That's what his father thought, anyway. Zamza's mother passed away when he was just eight years old, however his father was a good, respectable man, and cared for him as best he could. Throughout his youth, Zamza was taught to tinker and sail on the sea, but as time went on, he decided he took more of an interest in sailing through the sky. His father did not approve, but that didn't seem to stop the curious Mikain boy from researching and studying aeronautics and gyrocopter and zeppelin design and operation. His constant studying soon made him into quite the scholar on the subject of flying, although for his father's happiness, he sailed with him as much as he could. And that was enough.

At around the age of seventeen, Zamza set off to the big cities, Ironforge and Stormwind, to make his own business, which he later named Mikain Aerial Services. His most trustworthy means of making his business known, which included anything you would need a Pilot for, were word of mouth and an insane amount of flyers. His biggest problem was that he didn't have a ship of his own to use, so unless his employer could provide one, he'd be out of luck. Naturally, the first years of his business were slow and unsuccessful, but he eventually saved up enough money to purchase his very own airship. This was the make it or break it step, as all of his money went to his new airship. If this didn't work out, he would be out of business in no time. Luckily, his business skyrocketed. Suddenly, everybody needed a pilot, especially one with his own ship. He took jobs all across Azeroth, even for the Horde, and he made quite a killing.

As time soared by, Zamza reached the age of twenty-five. He had become quite popular with his business, and now piloted his very own, custom-made, top-of-the-line G-Model airship, The Sierra. However, for some reason, business had begun to slow down, and he was falling behind on his payments. His new airship was not easy to maintain. Three more years of slow business passed, and Zamza was barely making his way. It was around then that he decided he would have to pick up a side-job or two. Zamza was hired on the spot by The Laughing Jester, and has been bartending there to this day. Zamza also signed a contract with the renowned business tycoon, Byron Langley, as the Master of Aeronautics, where he would develop blueprints for brand new airship models as well as manufacture them. Although he was in love with his new jobs, Zamza still likes to take jobs on the side for extra profit.

Retrieved from "https://earthenring.fandom.com/wiki/Zamza?oldid=17738"
Community content is available under CC-BY-SA unless otherwise noted.