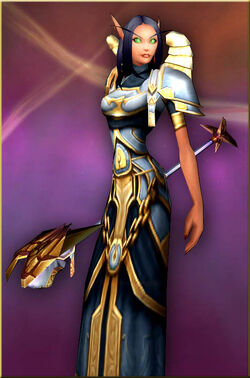 Virginie is certain in what she believes in, however she is not one that likes an argument. If she comes across one that disagrees with her, she will most likely not feed the conversation or turn a blind eye on the topic. Perhaps this personality trait allowed her to get along so well with her Orc love, Brokigar, who is extremely stubborn and would never want to be proven wrong. Very rare does Virginie express her desire to do something. She is generally accepting whatever her love wants to accomplish and follows.

However, when she does have the urgency to do a task, she will stop at nothing to make sure it gets done. She is an impatient woman, and is fairly moody. She can be pretty indecisive when it comes to minor decisions in life, and will stress over-analyzing various options before she settles.

Virginie has always been close to her mother, Vellinda Sunreau. She saw her as her true role model in character and attitude, but she had different ideas. Her mother had little care in diplomacy or the alliance with the Horde and only was concerned about her people. Virginie on the other hand, believed that a strong alliance with the Blood Elves' new allies will strengthen themselves as a whole. She had little references of their Kalimdor allies and her curiosity grew as she got older. Her mother warned her that present allies may become future enemies and it was best not to get close.

History is on her mother's side, so Virginie tried to push aside her curiosity and followed her mother's beliefs. However, the desire to build a strong relation with the new allies grew strong. Although it was against her wishes, Vellinda knew that Virginie's passion was too strong to bottle. Vellinda was called to arms at Sunwell Isle, yet Virginie was not ready for this great battle and stayed behind. The thought of traveling to Kalimdor while her mother was away crossed Virginie's mind, but she was not one to go against her mother's wishes.

Bored at home, Virginie studied herbalism and ate Bloodthistle. She received a thick letter from Vellinda, which relieved Virginie, as thick letters are a sign of good news. Vellinda outlined the events in Sunwell Isle and their progress to taking back the island. She also talked about how two factions, once enemies, now joined together for a single purpose. These subtle hints were clear to Virginie that her mother finally understood the power of strong allies. The next day, she prepared for her travels to the other side of the world.

Fascinated with the Orc's tactics and work ethics, Virginie left Eversong Woods and ventured to Durotar to work closer to the proud race. Although the Horde have embraced the Blood Elves as their new ally, the Orcs in the neighboring villages kept a watchful eye on this outsider. Many of the Orcs and Trolls have never seen a Blood Elf and were reluctant to speak to her let alone make eye contact. Although surrounded by many warriors and shamans, she felt isolated and alone.

Virginie had not adjusted easily to the barren land filled with poisonous scorpids. She was unaware of the dangers of a scorpid bite. In efforts to pick cactus apples, Virginie carelessly kicked aside a nest of scorpids which instantly attacked her, injecting her with paralyzing poison. Virginie lay helpless in the dirt, unable to use her magic on this foreign ailment.

Not too far from the site of Virginie's accident, was a young Orc scouting the area in search for a lazy peon to beat. His keen ears sensed Virginie's heavy breathing, which he took as a peon's light snore. In excitement of smacking another lazy worker, Brokigar rushed over to the site where Virginie lay. He hadn't fully comprehended the seriousness of her condition, after all a scorpid bite on an Orc is but a pin prick. Still thinking she was sleeping of laziness, Brokigar raised his club slightly and smacked her forehead.

The thought of a lazy sleeper agitated him when work had to be done. He slung her over his should and carried her to Sen'jin Village for the Shamans to deal with. The shamans are adept poison cleansers and easily rid Virginie's ailments. She then realized that living on this continent is not as easy has she anticipated, since her magic won't always save her. Yet she was determined in her goals.

She saw that Brokigar used no magic at all in his encounters. Instead he swung axes at his prey without needing power of light. She was mesmerized by this warrior's raw and brutal methods of killing, yet there was a natural grace with how he wielded his weapon. Determined, Virginie managed to convince Brokigar, as hard-headed as he was, to let her journey with him. Although he was not impressed by her magic after the scorpid incident, he felt enamored at the thought of protecting this elven healer.

Over time the two learned from each other and forged a strong partnership. Virginie was always in awe of Brokigar's strength and brutal passion. Brokigar eventually trusted Virginie's magic, as he tested her several times with attacks on raptors, Quillboars, and even scorpids. They quickly grew fond of each other and are rarely apart. She needed him and he needed her.

Her relationship with Brokigar helped Virginie adapt to her new surroundings. The Horde companions have accepted her as an ally and consider her, and all members of the Horde, as equals and therefore embraced Thrall's envisions of " The New Horde."

Kalimdor's culture has influenced Virginie, but some traits will never change. She still refuses to eat red meat, much to Brokigar's dislike, but will gladly cook it for him. She has more control over her natural addiction to mana, something easier to accomplish without Bloodthistle patches. Yet managing her energy will always be a challenge, something she continuously strives to perfect.

The Troll Priests, particularly Ur'kyo, have taught her how powerful mediation is and to draw your energy from your spiritual being. Slowly, she is improving her regeneration and effectively increasing her longevity. Though she has not forgotten her traditional methods of drawing mana, she has adapted to using them in moderation.