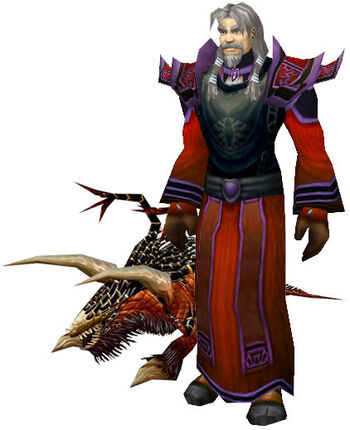 The older man, wizened or wise (depending on who you ask), holds a complacent posture for some and squared shoulders for others. He is somewhat known for sliding back and forth between the two at the drop of a hat. Usually dressed in slightly ragged reds or battered blacks he keeps his clothing as neat as someone without a home could possibly manage, wrinkles and stains abound. Over the years that he has trolled the innards of Stormwind, the hedge mage has shown as little skin as physically possible at all times, however he seems to refuse to wear a mask.

The Birth of an Heir

Veras doesn't talk about his beginnings, his family or his origins. It's amazing how easily distracted most people are from such lines of questioning. He was however, born. It occurred in the northlands by most reports, up in a small farmland community, or more accurately near it, just south of the Alterac Mountain range. Raised in the turmoil of a deep, pervasive family tradition his youth is a matter few risk delving into, and those that do have the scars to prove it. Such excursions have garnered tidbits about some woman his father knew, and how those that followed her gained insight at the cost of sanity. However: This much is known to many, Veras was raised not a child, but an heir, not to a crown or a kingdom, but to a vision and a philosophy.

A twisted satire of the Hellenistic period, Veras is most often seen wandering town dispensing advice (often unwarranted) and weaving together a picture for the future for those who ask for it. That is his profession, Soothsayer of Stormwind. The grizzled fellow has been claimed to have tenable knowledge of occult that spans the stars and beyond, many come with questions separate from fate and fortune. He prides himself as an older breed, and is most certainly set in his ways.

Gakuri is your prototypical definition of an Imp. The little fellow has a seething hatred for his master, loves seeming playful, but has killed at least three children in cold blood in his days.

Sarzazt never speaks and never really thinks. The coalescence of shadows is by far, once understood, one of the more disturbing things surrounding the wizard Veras. Having killed countless thousands for hundreds of masters, Sarzazt has no drive other than a cold, emotionless urge to squeeze the life out of anything and everything.

Of his minions, Aelna is the only one who would follow Veras even if she was not bound. This is all for one simple reason: the succubus has pleasure and pain wired backwards in her head. Pain literally causes gasps of excitement and a lustful hunt for more from the demoness. Now, at first this may seem to have weird sensual attraction to it; however, I assure you, one feels more disgusted, debased, and plain old dirty after Aelna minces her innards willingly on the end of a blade.

The felhunter is not actually Veras's originally. The large, brutal, feral hunter was his father's, and is one of the few things actually passed down from father to son. Veras doesn't even know exactly how many generations of Winvales have had Bruufum under their binding. One thing is for sure however, the old canny beast is more than a match for Veras in terms of wit -and- power. And should never be underestimated.

Retrieved from "https://earthenring.fandom.com/wiki/Veras?oldid=29750"
Community content is available under CC-BY-SA unless otherwise noted.