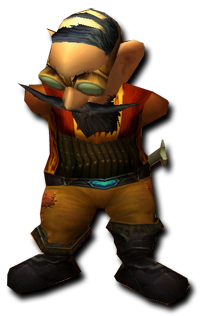 Toddles is more-or-less oblivious to his own appearance in addition to other's. His hair has thinned into nothing but a stringy comb over on his head, and his long mustache is more abysmal than charming. His clothing is always in various states of being mucked with grime or worn until threadbare, with exception of his boots, which are oddly made of plate.

He is never seen without a pair of goggles tightly strapped over his eyes. The bright leather strap is noticeably pulled too tight, sometimes to the point of turning his bald crown bright pink. His belt is adorned with a wreck of arcspanners and various other engineering tools that clank as he walks.

Jittery, would be one word. Also overly-excited, but nervous. Toddles is a mixed bag of emotions all packed snugly into one squat gnome. He's prone to stuttering when nervous or terrified, and twiddling his thumbs together when he's lying or not telling the whole truth. The latter and former are actually done quite often.

He also has an incurable fear of all bears, a fear so great that he is completely incapable of going into great detail as to why. This fear also extends to dead bear rugs, which he considers equally just as evil as live or undead bears.

Prior to the second plague that washed over Azeroth years after the Third War, Toddles McGear McSprocket II led a quaint gnomish life. He was raised in a family of seven brothers and sisters (each), and did well in his studies. While he was really only talented in tinkering with sprockets and cogs, he always aspired to be a writer. This led to a career with the Stormwind Daily Bagle (spelled B-A-G-L-E) that was short-lived, due to his inability to spell or meet any sort of deadline.

After being fired from the Bagle, Toddles decided to go on vacation through Azeroth to find himself and perhaps his purpose. He ended up caught up in trouble near the Plaguelands and disappeared for two months. When he showed up in Stormwind again, the Knights of the Ebon Hold were suspiciously arriving at the same time, much to his panicky chagrin.

He now spends his time in Stormwind or Ironforge with his new repairman business, which is surprisingly thriving despite his life's previous non-successes. Still, even the barest mention of the phrase "death knight" puts him into incurable jitters, despite his occasional... well, death knight-like characteristics.

A: Depends on what being a death knight is. Toddles isn't mean (even to bears), and doesn't use runic powers to kill. But he is known to cross the Stormwind canal waters on occasion to retrieve a shiny copper.

A: Perhaps. It depends on the time of the week, how much he's had to drink, or possibly how many bears are in his local area.

Q: What death knight powers does Toddles have?
[]

A: Aside from occasionally striding across water surfaces without a hitch, Toddles occasionally sneezes out a death and decay. Both tend to happen to his genuine surprise. He may or may not possess other death knight-like powers, but only two have shown themselves so far between his running from bears and terrified sobs.

Q: How did Toddles become a death knight?
[]

A: Ask him. Although it might take him a few days or months to give you the answer.

A: Bears aren't part of the death knight discussion. But still to answer: bears are horrible.

Recently, Toddles has taken unto himself in attempting to ban bears in the city of Stormwind. This sudden bout of activism was founded by his incurable bear phobia, along with his mislead belief that all people should be afraid of bears, or at least be well-informed of all bear dangers.

He fervently believes in either a bear conspiracy or at least the existence of the terrifying rocket bear, which has terrorized him on three five separate occasions.

All of these tidbits were allegedly gathered and pieced together by Bear Ban research. Their information is spread by means of flyers or pamphlets, with only five facts given at a time with each installment. This may or may not be why the information contradicts itself, considering that Toddles has a bad memory in most given situations.

1. Bears are evil.
2. Bears are afraid of the dark.
3. Bears can set things on fire at will.
4. Bears might be ARE using rockets.
5. Bears can't swim, because they melt.
Link. To original post.

11. Bears are attracted to clapping hands. This might be a mating call.
12. Never give a bear applause.
13. Bears may or may not be allied with murlocs. If they are, this signals the end of times.
14. Bears are not to be confused with werebears.
15. Werebears are possibly druids, suffering from the werebear gene. They're only sometimes a bear. This is considered horrible.
Link. To original post.

16. Bears may or may not be able to read.
Link. To original post.

17. Consider the idea of weredruids. Bears that change into seemingly harmless druids.
Player's note: this Bear Fact added by Min on the Earthen Ring RP Network.

18. Bears may be in league with squirrels, or squirrels may be in league with bears. It is possible that squirrels are working as bear-spies, spying where bears cannot spy and go!
19. Bears hate singing. There's reason to believe it makes their ears explode. Therefore, singing is encouraged.
20. Bears are deathly afraid of cats. Non-bear believers must have a cat on their person at all times.
21. Bear moods most definitely and without doubt cycle along with the moon. Moon phases depend on the bear. There is currently no correlation with gender.
22. Bears are particularly attracted to the following: gnomes, other bears, non-bears, objects resembling bears... and possibly pic-a-nic baskets.
Link. To original post.

Recently, Toddles used his engineering skills to create products that were popular for anti-bearists, but unpopular for the bears themselves.

Bear Ban Spray™: Currently in its testing stages, this convenient anti-bear spray can fit in any purse or traveler's backpack! Simply take out, shake and push a button to spray the bear away!

Manufacturer's Note: Not compatible with other sprays such as perfumes or pesticides. User may or may not explode at times while Bear Ban Spray™is in their bag. Exploding victims in testing tended to include fire mages. Apologies to families involved.

Bear Ban Magnet™: It's like a magnet, only backwards! Since testing began, it's become apparent that all bears are magnetic, but they all are conveniently one pole! So take this electromagnet, switch it on, and ta-da! You and the bear are suddenly forty feet apart!

Manufacturer's Note: The makers of Bear Ban Magnet™ are not liable for where you may land or what injuries you may sustain while using their product. Also, please do not use while standing between two bears or more.

Player's Note: many thanks to Channa from the News from World of Warcraft's Earthen Ring website for making the Bear Ban Product graphics. They're gorgeous and made me laugh when I found them. Permission was obtained prior to using images on this wiki.

Also, special thanks to Alastyr for being apart of Toddles' original inspiration, even if he didn't know that once open a time, humorously chasing a level 1 alt in bear form in Park was going to lead to anything. And another thanks to Min who added a great Bear Fact idea.