Black bushy beard. Bald head. Piercing eyes. You would see these if Throdin ever took his helmet off. But the only time Throdin takes his helmet off is when he gets naked. No one's ever seen him naked. Rumor is you'd go blind if you did. No one knows.

Throdin on what lies underneath: "My scars have scars. It looks like a drunken architect drew a multilayer street plan on my flesh with a skinning knife. Look, why don't you stand toe-to-toe with a dragon whose claws are bigger than you and see how pretty you look afterwards?"

Normally an individual willing to charge to their death facing great beasts, over & over again, sometimes multiple times in the same battle (Current record: 3 deaths in 9 seconds), would rightfully be suspected of mental illness. However, Throdin shows no signs of insanity or sadomasochistic behavior outside of battle, aside from the occasional drunken decision to dungeon delve with complete strangers. Since Throdin is at his fiercest when planting himself between a beast and his "squishier" allies, this tendency probably stems from a deep-seated drive to protect his charges, rather than a subconscious death wish.

People may doubt his motives, but few question his tenacity. Rumor is that when Nefarian turned his attention away from Throdin, he dug his shield into Nefarian's tail and dragged himself behind the great dragon, chopping away until Nefarian had to turn back towards him to avoid an amputation. His personal motto is "No one dies before I do!", and although he isn't always successful (they are squishy, after all), few monsters can focus on his allies for more than a second while he's still breathing.

Outside of battle, Throdin spends most of his time preparing for it. If he isn't smelting new armor (or repairing the one pieces), he's embarking on mining expeditions, hunting down rumors of legendary equipment, or consulting the herbalists on potion quotas for the next adventure. Other interests peek out through how he goes about this: his mining expeditions often venture into unmapped lands, and he spends an inordinate amount of time helping fight back Infinite Dragonflight offensives in the Caverns of Time. He's also developed an encyclopedic knowledge of support & control spells from his numerous dungeon crawls.

Sarcasm, thinning patience, and a lack of flourish is how Throdin expresses the typical dwarven dourness. Lofty plans and flamboyant actions are not his mug of ale. Until he gets drunk; then he suggests stealing Horde catapults from the Barrens to reach Nordrassil. Throdin's skill at dancing, even in plate, suggests a more frivolous childhood and several dozen years practicing Dwarven Ballet.

Throdin has a pet turtle named Siege whom he is Very Protective of. His adventuring supplies include a large backpack of potions, meats, cheese, and ale. 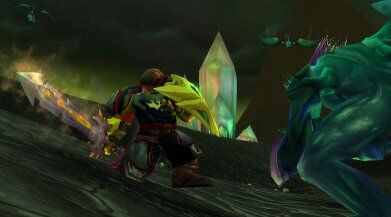 Throdin was conscripted as a dwarven infantryman during the Second War and served through the Third War. He says his service during the wars was "boring" and "not of interest". The only details he's given about that time was he served under [Lord Garithos] after the plague and hated every moment of it. When no word was heard from Garithos, his regiment returned home. There he retired from the army and became a mercenary warrior.

During his travels, he visited Kalimdor, delved into Uldaman, and briefly scouted Horde lands. However, his proudest memories are from his excursions into Blackrock Mountain. He fought in the Molten Core, helped clear out Blackrock Spire, and stood toe-to-claw with Lord Nefarian.

Calithos: "I saw you get your head chopped clean off! Then you come back good as new 4 days later and ask for an ale!"
Throdin: "I was parched."

Throdin can resurrect himself without using mortal magic. He doesn't remember exactly how; his memories of the period between death & resurrection are fuzzy (possibly from drinking lots of ale right afterwards). He does remember seeing a glowing ethereal woman, with wings sprouting from her back, whispering that his time had not yet come, and pointing towards his body.

"And then I follow her finger, get close to my body, and suddenly here I am again! No, she doesn't bring me to my body! You expect her to do all the work?!"

Throdin doesn't know of anyone else that's experienced this. Remia & Drahliana believe he might have seen a celestial. Calithos just thinks he's unnatural.

A few months ago, Throdin & Calithos decided to visit the Barrens. While drunk. These are his currently known infractions against the Horde from that night:

Throdin volunteered to spend a week in Netherstorm in Calithos's place, giving him some time with his wife Remia and their newborn child.

During his week in Netherstorm, Throdin was contacted by Shame. She had heard he was a "Dwarf Who Doesn't Die" and offered him a job: find Langley and his wife Bonnyjune. Their gyrocopter was last sighted crashing into the Ghostlands. While visiting Calithos & Remia to tell him he had to cut his week in Netherstorm short, he met Drahliana again. He asked for her help finding the 2 gnomes. She accepted and went with him to the Ghostlands.

They returned from the Ghostlands without Langley or Bonnyjune. Throdin only stated "the trail went cold" but they "didn't find bodies".

Throdin, on Onmyoujin's advice, met with the fortune teller Voletta to determine why he can't die. Voletta said that the spirits wanted to ensure Throdin didn't leave until he completed some task; she suggested it involved protecting a dranei from something. Throdin, lacking any other leads, agreed to look into it and try befriending the dranei to see where that led.

Throdin attended the Templars of the Rose's Love ball, where he helped subdue a psychotic elven rogue intent on killing Kanta. Although he met some new companions there, the whole experience required a night of drinking to get over.

Lately he has made friends with Kanta and Ganoes and been sucked into the various problems plaguing their families, including assassinations, shadow cult harassment, and an assassination attempt on Sydile (supposedly) ordered by one of Saphrina Ayls's minions. Throdin will probably interfere with this very soon...

Throdin tried to help Amenia Tir'ir regain her memory after she was poisoned by Saphrina. The results, so far, have been mixed. Luckily, she doesn't remember Throdin's failed attempts...

Throdin recently helped the Templars take down Saphrina and one of her deathknight lackeys when they showed their faces in the Park. Luckily, there were no casualties.

Retrieved from "https://earthenring.fandom.com/wiki/Throdin?oldid=24250"
Community content is available under CC-BY-SA unless otherwise noted.