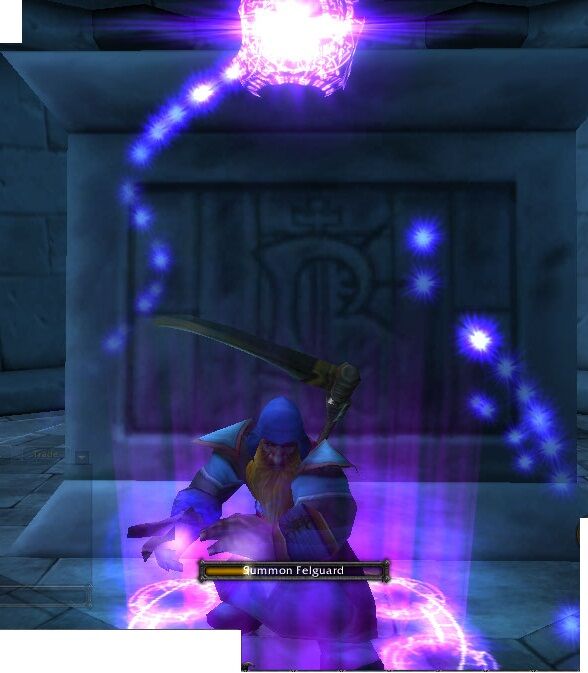 Name:Thorank "Vulture" Blackstone. (Above), The warlock himself summoning Flaakorill, his

Realtives:Tomas "Buzzard" Blackstone, countless relitives whom he has barely met.

Allignment:Chaotic and, or Neutral Evil.

Profile:Thorank Blackstone was born into the semi wealthy Blackstone clan who makes their living by brewing beer and high quality whisky.However, some members of the clan practiced the dark arts of fel, and so he was taught these arts by some members of his famliy in secret.About two years latter, people began becoming mysteriously ill due to the consumption of the beer or whisky.The Ironforge Elite Force was sent to investigate.The drink was contaminated due to a fungus which infected a keg that was accidently opened by one of their workers.About 30 years latter, Thorank became an accomplished warlock, and soon he was about to be burdened with another famliy member.While he was working on cleaning the kegs, he heard a know on the door and found a cradle with a name tag on it, the infant was a human, and the card said,"Take well of this one name Tomas.', and after that he trained him to become an accomplished bodyguard and his compainion on long journeys.Now, Thorank walks around and is called "Vulture" due to his deformity, a crooked nose.

Thorank and his demons, starting with [Flaakorill]:Flaakorill is your basic felguard, kill, defend, and work and also he is very new to the service of the Blackstone Famliy.

Barvhug:The oldest and most cunning of the demons, this voidwalker was implored into the service of the Blackstone famliy since the War of Three Hammers, and is very calm and placid when in his master's presence, acknowlaging that he is a decended of a Blackstone, and has the authority over him.

Carrida:The most sadistic and deceptive demon in the service of Thorank "Vulture" Blackstone.Soon after his training, Thorank learned the ability to summon one of the most aluring demons to those not trained in the art, a succubus.Carrida also enjoys killing small animals, and atracting men that are not her master.She dispises it when Thorank has to make deals with females, this is one of the reasons Thorank barley uses her.