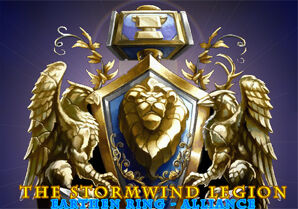 The Stormwind Legion is a section

of the Army. The Legion is Stormwind's contribution to the Army of The Alliance and is sworn sworn to defend the alliance. The Legion is to make sure no Scourge nor Horde will attack without retaliation.

Stormwind's Legion performs mainly at the front, but also goes on missions ordered by the King. When The Stormwind City Guard faces a trouble they cannot handle alone (those situations are rare), then the legion will offer his help to the Guard for the safety of the city.

Anyone who joins will be trained for the field of combat and will be worthy of his rank.

The current Grand Marshal's of the Legion are:

You will respect a higher officer or a citizen, and adress them with Sir or their current rank(only for Soldiers).

You will obey and will not question an order given by your superior.

You will not deny an order or that will be considered as mutiny and will be punished by death.

Before you act always ask for permission.

The Legion is a highly respected section so you will do nothing to make a shame of the section.

Are you tough enough to be a Soldier?

We need active and highly experienced RPers that are mature and serious about the RP matter. We recruit the best of the best so before you join we need to have a interview to see if you're worthy. You will need atleast an average skill in English.

Recruitment will be done by /whispering any of these listed and a meeting will be arranged. People could improve the RP part of this by sending an IC letter application about the recruitment.

Generally White and Blue. Officers: Officers will wear a uniform that seperates them from the average Soldier and are allowed to wear Gold armour like Rank 14 armour.

Soldiers: Will wear white and/or blue armour, like Imperial Plate or Platemail armour.

Every Soldier needs to learn the basic commands wich will be taught by the Drill Sergeant.

Fall In: When this order is called, all soldiers should line up one pace away from the Guardsman/Officer giving the order. Each guard should be one arm's length from each other. The line should be a single line unless a double line is called.

Attention: All soldiers stand to attention (commonly this order is followed by guardsmen emoting *Snaps to attention*). Stand as straight and tall as possible, arms at your sides and your heels together. You must stare directly forward, not at your commander.

Present Arms: All soldiers salute to the front.

At ease: Soldiers are to remain in a line up but can relax their position from ‘Attention’. Should be followed by emoting *places feet shoulder length apart and hands behind back*.

Incline: Used with the turn left/right commands. Here you are ordered to turn 45 grades to the ordered direction.

March: Soldiers are to ‘march’ (walk) behind the patrol leader.

Double Time: Soldiers should now run, but still remain behind the patrol leader.

Forced March: Guardsmen should head as fast as they can to the designated area, they do not need to remain behind the patrol leader.

Hold/Hold position: Soldiers are to stop exactly where they are. Nobody flees, nobody pursues.

Take cover: All soldiers take cover behind whatever obstacles or terrain is available, ready their backpacks for battle and assess the foe to come. If failing to hide, move around to dodge the enemy blows/spells but stay near the other guardsmen.

Draw arms: Soldiers should arm their weapon of choice.

Ease Arms: All soldiers should sheath their weapons.

Fire: Soldiers shoot and release spells on the given target.

Draw Grenades: All soldiers should ready any available grenades.

Loose Grenades: Soldiers toss their grenades at a given target.

Charge: All soldiers should charge against the foe!

Form: Soldiers should move to create a ‘recruit’ around the ordering officer. Lower ranks are to stand at the 12, 3, 6 and 9 o’clock positions around the officer to offer protection. This command may also be issued to form around an escort such as a dignitary or prisoner.

Fall back: After giving this order the officer runs off and stops a few screens away. All soldiers run the same direction, and form around the Officer unless other orders are given.

Officer on deck: If an officer approaches the highest rank in the group will say: Officer on deck! and everyone present will stay at Fall In command until further notice.

IMPORTANT: When you march out you will follow the soldier right of you.

All military got keymembers, the Legions keymembers are listed here.

Grand Marshal Thriarthas Wood: Rules over the entire legion along with Grand Marshal Eldarian Silverheart. One of the Legions founders and founder of the S.E.S (Stormwind Elite Squad) Saved Commander Likko from getting executed.

Grand Marshal Eldarian Silverheart: Rules over the entire Legion along with Grand Marshal Thriarthas Wood. One of the founders of the Legion. Tried to get Commander Likko executed for high treason.

Marshal Szayel: One of the founders of S.E.S. Only person ranked Marshal and important keymember of the Legion. Also leader of the S.E.S

Commander Duane Hrolph DeLean: S.E.S, Recruitment Officer and Drill Sergeant. Helped build up the Legion by recruitting civillians as well as soldiers to the Army.

Commander Likko: Former S.E.S Captain and Commander. Likko was charged for treason and is currently in jail.

Commander Millanos: S.E.S Commander, got injured at an assault on Orgrimmar and close to getting killed by a hitman.

Captain Zackariah: Head representive of the Legion, attending at meetings such as with the House of Nobles and the Military Council.

Retrieved from "https://earthenring.fandom.com/wiki/The_Stormwind_Legion?oldid=34984"
Community content is available under CC-BY-SA unless otherwise noted.