Before the Sundering, Tharion Draghei Mordaveh lived with his family around the base of Mount Hyjal. Tharion himself was a scholar, dedicating himself to books and the pursuit of knowledge. His brother, Azhaan Thelriz Mordaveh, followed the more martial path, as did their father, who was a guard of their village.

During the upheaval caused by the opening of the Well of Eternity and the invasion of the Burning Legion, Tharion found himself running from the monstrous demons that poured forth. During one particular encounter, he ran away and left both his father and brother to fight a particularly nasty felguard on their own. Azhaan never forgave him for this. Shortly thereafter, Tharion left his home in self-exile, shamed by his own actions and fears.

After a few years wandering the Ashenvale forest, he met a young kaldorei woman named Elaia Shaillan. By this time Tharion had voluntarily dropped his middle name and family name, only going by "Tharion." Elaia, taking a measure of pity on the wandering vagabond, brought Tharion to a small encampment. It was at the encampment that Tharion first met Eraelan Netherbane, a demon hunter and a teacher of that path. Elaia was one of his students.

Tharion, still weighed by the guilt of leaving his father and brother to fight the fel creatures alone, chose to learn the path of the demon hunter, and Eraelan agreed to teach him. The encampment became Tharion's home, and as he advanced in his skills and his outlook, Eraelan gifted him with the name "Greyseer" to indicate Tharion's unique view of the balance between good and evil.

When the third war fell upon Kalimdor, Tharion left the camp to fight the invading Burning Legion. He fought well enough, but realized that his skills were not as sharp as they needed to be. This was the first time since the Sundering that anyone had faced so many demons of such power, and he discovered that years of practicing against other kaldorei and woodland beasts did not compare to fighting the real thing. Thus he returned to the camp, only to find it destroyed and Eraelan missing.

Tharion then chose to wander the world, looking for ways to advance his training himself. Believing his mentor dead, Tharion had no one to guide him to the completion of his path. It was then that he first took his steps into the full world of Azeroth. 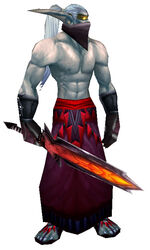 Tharion follows the traditional garb of the demon hunter path, which usually consists of light protection to allow for better movement and agility against the typically slower foes of the Burning Legion. At his most feral, and some say, closer to the demon bound within him, Tharion dons little more than a face mask, darkened handwraps, and his traditional kilt. 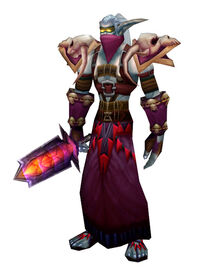 When Tharion is not in the midst of the hunt (or any other potential combat), he can most commonly be seen wearing twin demon skulls upon his shoulders, strapped to his body with a myriad of belts and buckles. Around his waist hangs the same long kilt, which allows him less protection, but an ease of motion that restricting armor cannot always match. Finally, Tharion's face is almost always covered with a mask of some sort whether he is in or out-of battle.

This attire is most commonly known as Tharion's teaching attire. It is the signature appearance that most of his students know.

Sometimes more protection is necessary, and it's in these times that Tharion dons a uniform to proudly display the colors of the Netherbane. Covering himself in blood red and black armor, the Greyseer takes on a countenance similar to his long time battle companion, Blood.

There was a little known phenomena that happened many months back, when Tharion's wife-to-be at the time encountered an entity that she believed to be a future aspect of him. It was revealed later that the Bronze Dragonflight created this passive projection as a warning, that The Greyseer's path as a demon hunter was not fully complete, and that he still had much further to walk.

This "future Tharion" was seen wearing a red kilt, his chest bare and tatooed with strong binding runes. Most of his light armor appears to be made of demon skin, which has lead to some referring to it as "demonhide" armor. Upon the left shoulder of this future version of The Greyseer appears to be a severed demon head that some may say appears very much like a shrunken version of Sraath's. Lastly, this older Tharion is seen wielding a weapon that has been dubbed the "Netherscythe," which some say exists today.

Only the passing of time and the diligence of the Bronze Flight will tell if this version of Tharion Greyseer will eventually evolve out of the demon hunter that most know today. 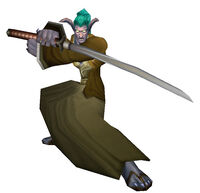 This weapon, which is essentially a daikatana nearly as tall as the Greyseer himself, is the only weapon that has been in Tharion's possession since the beginning of his training. The weapon was forged by Eraelan and given to Tharion upon his official acceptance as a student, and it is the very sword used to defeat and bind the demon that is now a part of the Greyseer's path.

Tharion rarely carries this weapon anymore, as it rests in a place of honor at the Netherbane Site of Lessons deep within the Ashenvale forest. However, a recent battle with Sraath caused Tharion's once most potent weapon, Felborne, to be shattered. After this, Tharion unsheathed his ancient blade until he was able to re-forge Felborne into Netherborne. 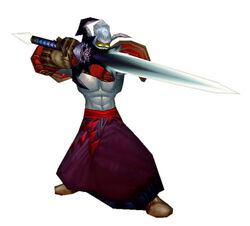 When Tharion was bound to the infernal spirit of his demon, the soul of the beast was ritually "quelled." It was the specific way that students of Eraelan Netherbane gained their abilities. However, this way did not come without its side-effects.

One of the most feared side effects to a demon binding is the awakening of the spirit which most often lead to a full possession of the inherently weaker student. Nearly five years after the end of the third war, during Tharion's travels of Azeroth in search of new guidance, the quelled demon spirit within him awakened.

Driven nearly mad in a mental and sometimes spiritual fight against the raging and brutal essence of an infernal, Tharion resigned himself to a ritual suicide to avoid the fate he had witnessed too many times before. The ritual was completed and Tharion Greyseer embraced the darkness.

But apparently Eraelan had further plans for his greatest student. Unbeknownst to Tharion, Eraelan had survived the third war, but was taken by the Burning Legion and converted into a satyr. It was this form of Eraelan that used fel-sorcery to summon Tharion's dying body and undo the ritual. A stunned and now awakened Tharion was shocked at the truth behind his former mentor's disappearance, but all confusion gave way to the hope that Eraelan offered: a rebinding ritual that could transfer the offending slivers of the infernal soul into a vessel other than the Greyseer's body. Weakened, Tharion agreed.

The rebinding was completed and the demon's soul was transferred into that of a sword Eraelan had forged many many years ago. Thus was created Felborne, a weapon bound to the very soul of Tharion Greyseer.

Felborne was not an easy weapon to yield, nor was the demon soul within it pacified. Tharion still struggled against the churning beast within his blade, but the fights were easier and less intrusive to his psyche now. However, over the years Felborne went through a number of changes.

A battle with the pit lord Daeloth left both the massive annihilan and the infernal-bound blade changed. Daeloth was weakened to a point that the disguise ability granted by Sraath trapped him in the form of a kaldorei. Felborne, on the other hand, siphoned enough of the demon's soul to gain a new level of consciousness.

Later, the deathblow dealt to Elaia Shaillan shattered the magical binds that kept the weapon tied to Tharion, and it also shattered the entity within the blade as well. It was largely believed at this time that Felborne was "dead," a mere weapon like every other. Time, however, would show different. 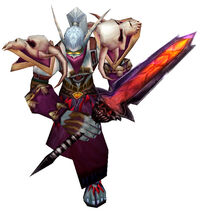 A battle with the immense doomguard commander Sraath the Reborn left Tharion severely injured and near-death. It was the efforts of Tharion's own most promising student, Taldarion Shatterbound that saved the Greyseer from an unpleasant end. This same fight also shattered Felborne, who had been slowly attempting to rebuild its consciousness by siphoning energies from every demon that Tharion hunted.

Tharion kept the only shard he was able to salvage--the skull-formed hilt and handguard of the weapon itself. He carried the shard like a pendant, hanging from a chain around his waist. It was after his recovery that Tharion unsheathed his ancient blade to allow himself to continue to fight.

Eventually, Tharion Greyseer turned to the weapon that was once wielded by the satyr form of his former mentor. Eraelan's immense black glaive had been recovered from somewhere deep within kalimdor, where it is believed it had been discarded by a renewed Daeloth. Tharion shattered the black weapon and used the black metal shards to reforge Felborne into a new weapon.

Tharion Greyseer now wields Netherborne, a widened black blade that has never fully cooled from the forging ritual. The blade is easily recognizable from its molten spine that eternally glows, and from the sinister whispering that invades the thoughts of those who listen.

The demon in the blade is awakened once again, empowered with new energies. Some say that Tharion's Weapon may be a greater threat to the Greyseer than many of the demons that he hunts... 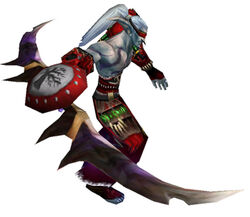 It is unclear where the Netherscythe itself has originated, as it has only been seen in memories and future visions. What is known is that it is a massive bone warglaive, tied to a blackened metal handle and shielded with the crest of Tharion's Netherbane school.

Some claim that when Tharion eventually defeats Sraath, the ribs of the massive doomguard commander will be carved into the weapons.

Others claim that the bones are from some as-of-yet unseen demon that hunts the Netherbane as they venture further into Outland and encroach upon the veil into the Twisting Nether.

And yet still others claim that the Netherscythe exists now, and is in Tharion's possession... but that he somehow keeps the immense weapon hidden.

Only time will tell.

True Neutral, swaying around depending on the mood or climate of the events around him. 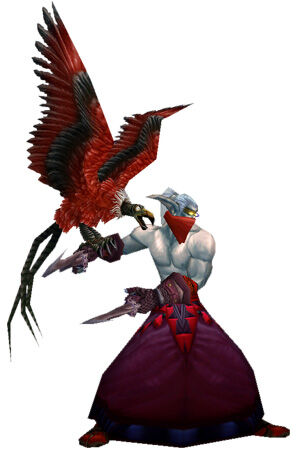 Retrieved from "https://earthenring.fandom.com/wiki/Tharion_Greyseer?oldid=35169"
Community content is available under CC-BY-SA unless otherwise noted.