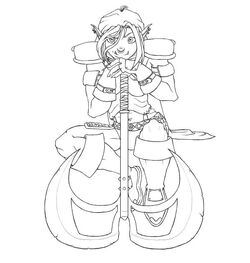 At first the young grunt did not want to go, but after Gronesh convinced her that she would die if she stayed, she finally gave in. She packed her belongings and headed south aimlessly. She wandered for days until she reached the Barrens, and after several hours of walking through the grueling heat, she came upon the most unlikely thing to find in a wasteland: A bar.

It was the Tavern of the Drunken Monkey, to be precise. Here she found the friendly faces of the Tauren Stonehoof Clan: Pazo, Leza, and Taurog. Through hard work helping out in the tavern she earned a place to stay. It wasn't long later that she was asked to become a part of the Drunken Monkey Brewery to work as a Rum Runner. From there she traveled various parts of Azeroth with the orc shaman Matok Zautok, whom she sees as a brother.