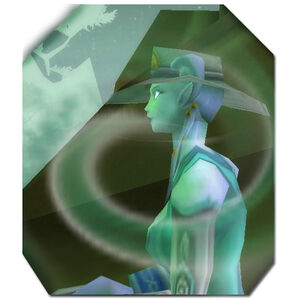 About your average day Draenei. She has round horns that curve down much like those of rams seen around Azeroth. Taalies prefers short hair so its cut to a length that doesn't interfere with her daily activities. otherwise her skin is a light aquatic blue with a pair of lovely eyes who always seemed to either give off she's tired or giving a seductive glance.

A somewhat distant person. Taalies was once told to be very social and active but as of late she's been very distant and kept away from social gathering. Many suspect it was at the lost of loved ones during their decent into Azeroth that might have triggered this personality change but no one knows for sure. It seems that there are only a few who she seems to open up to. Not to say she is completely silent, she talks to others only when necessary otherwise she's a silent one.

Taalies was born when the race of Draenei first arrived on the planet of Draenor now Outlands. Her parents took care of her while the race tried to establish itself a new home on this foreign planet. Her family being of somewhat wealth was granted quite a bit of power when the society of Draenei was first crafted. Through most of her career she lived in luxury and joy.

When she heard of Fareseer Nobundo's learning of the elements she was intrigued. Most of her life she lived in the wealthy home of her parents not knowing much about the world and planet she lived on. When Velen accepted the teachings of shamanism into the Draenei culture she was one of the first few to learn even though her family frowned upon it.

She excelled in class without much hesitation, the training and skills of a shaman came naturally to her. Taalies easily became a prized student. She learned to weave the wind, bind fire and mold the earth with her skills.

Not only so but she was an outspoken individual during these years. Speaking out against any hint of corruption in the governing system and environment. She particularly enjoyed reading books and filling her head with facts and knowledge from all edges of the land.

When Kil'jaeden came to the land Taalies and her brethren used their skills to protect as many as they could. During this period of time she met Thirft, a Draenei warrior. They were always by the front lines swatting down demons to protect the elderly and the young. Seeing many of her friends struck down by Orcs during this period, Taalies grew a hatred for them.

Thirft and Taalies were infatuated with each other and were held together by their pledge to protect against the evil that the Crusade have wrought. Taalies was a strong leader, even though she might be misguided sometimes, and Thirft was the brawn that carried out her plans. During the great sundering of Draenor, Taalies and Thirft sheltered many of the surviving Draenei in the secluded areas working as guards. She used the elements to inform her of approaching Fel Orcs or demons.

Still an outspoken individual she gave her unshakable support to the creation and foundation of the Shattrath city. Her family went straight to work with the Naaru to create a safe haven for all those affected by the Burning Crusades. Her family now has some influence and became the head members of the Aldor faction of present day Shattrath.

Taalies was suspicious of Illidan when he came into Draenor. She was secretly fearful that his presence would spark the burning crusade to reappear and cause more havoc in her already chaotic world. When Illidan retook the black temple Taalies was not quiet, loudly proclaiming her stance to her fellow Draenei though even she knew that the Draenie were too weaken to stand against Illidan.

As events unfolded Velen spoke of escaping Draenor to find new refuge. Being the adventurous and outspoken person she was she immediately volunteered herself to be part of the scheme, also find that she could not bare seeing their worshiped prophet and her renowned teacher become harmed. Dragging Thirft with her who was not unwilling to go.

The successful retaking of the Exodar was filled the ship with celebration and joy but when the sabotaged ship was having trouble Taalies and Thirft were one of the first to travel to the troubled area. There they found Ethereals dispatched destroying key equipment to the ship. As they fended off against these beings it was announced that the ship was spinning out of control and into a foreign planet unexpectedly. They fought off the Ethereals but more and more appeared. Taalies sensed that the ship was plummeting by the shift in momentum. Thirft knowing the fight was impossible to win in their already exhausted state threw Taalies into a safety capsule laying close by. As the hatch to the capsule closed a sight of desperation but satisfaction could be seen across Thirft's face. Taalies still a bit confused to this day of this expression, she can only infer it was knowing he could safely guard her against harm. Thirft then opened the doors of the ship sucking him and the Ethereals out and scattering them somewhere across Azeroth. When Taalies woke she was on the ground in a heap of metal in a foreign world.

When she arrived on Azeroth much of her gear was destroyed and her knowledge and training as a shaman seemed to have weakened. Either to some kind of potential concussion or what she believes as the elements of Azeroth being out of tuned from what she was used to.

Taalies set off to improve her abilities and learn about this new world. However it was noticeable that her attitude has completely changed. She became a more depressed individual and prefer to be solitary than with company. Many seemed to just leave her to her own worries.

She managed to scrap her way to the Dark Portal. Passing through it she found herself back on Draenor. Reuniting with some of her family she passed word to others of what has happened from the other side of the portal ensuring some hope of retaking Draenor from the outside.

During her time in Azeroth she has found some friends. During one participation of an arena skirmish match she was pitched against Taalia, a human paladin. Taalies only believed it was due to the similarity of their names. When she scoured for her name on the roster Taalies found she was facing Taalia, she was met by Taalia who at the time was shopping for dresses. Taalia in her bright nature greeted Taalies but only to be blown off by Taalies weary attitude. During the match Taalies found Taalia was a proud soldier and mighty fighter, much of which reminded her of Thirft. They spoke afterward and Taalia became quick friends with Taalies through much of her own surprise. Though their personality are quite different it seemed that it works well with Taalia always trying to convince Taalies to become a kindlier person.

Through Taalia she was introduced to Rorloc. There was not much connection to Rorloc but they both seemed to enjoy being around forested and uninhabited areas. Finding Rorloc to be a great person to find to accompany her during meditation sessions in the forest.

Retrieved from "https://earthenring.fandom.com/wiki/Taalies?oldid=28722"
Community content is available under CC-BY-SA unless otherwise noted.