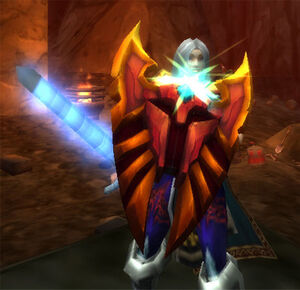 Typical slender human females. A petite waistline with well toned well-fit upper body. The straight lengthy hair tumbles down to her shoulders which at first glance appears to be gray of aging but on closer inspection is pure white. Mistaken-able for being elderly because of the hair, she is quite young. Carefully hidden underneath her hair lies two large circular golden earrings handed to her from her decease parents. It is difficult to tell but a few freckles lie just on top of her nose. One distinguishable feature of Taalia is her plump lips which she makes the best use of (/wink).

Though coming from a harsh beginning Taalia has been surprisingly happy spirited. Always cheerful and uplifting, helping homeless, elderly and children. Loves to socialize and meet other new friendly faces that walk through the gates of Stormwind and Ironforge and welcoming to any and all new strangers. If Taalia could be described in one word it would most likely be 'Do Gooder', loving nothing more than to lend a hand to those in need of it. Although from time to time she does enjoy to be a flirt.

Taalia is also a very girly girl from time to time. Loving in her spare time trying on outfits and looking pretty. Some would describe it as an obsession. While some would argue it is just natural for a woman to want to look lovely others would say she is making up for all the things she missed out for in her childhood.

Her parents lived in the cities to the north before the third war but when the plague came in, they sought shelter in the city of Stratholme. There she was raised and was taken care for....until Arthas arrived with his burning vengeance. When Arthas came into the city burning everything in his wake, Taalia's mother gave her a pair of golden earrings that she used to wear and hid Taalia in the basement of their home. When all the fighting and noise and slaughtering ended she was found and escorted out to the city of Lordaeron and later Stormwind by Uther and his men.

From then on Taalia was raised in the orphanage in Stormwind city. There she treated all the other orphans as her brothers and sisters. Taalia was fun loving and helpful in the home but most of all grateful as well. In Stormwind she loved exploring its nooks and crannies as well as listening to adventuress's stories. Most of all Taalia loved watching the parades honoring heroes, she gazed at the warriors, mages and priests walk by on top of their mighty mounts. However she looked forward most of all to the paladins like those who saved her from the burning city.

When she reached twenty she left the orphanage (although at that age you were forced to leave) and looked for work in the surrounding shops and stores around Stormwind city. After a couple of years Taalia found no success, unable to hold a job for more than a couple of months at a time. Feeling unable to devote herself to mundane duties of trades. Finally she was thrown out of her work, and subsequently her home, at a tailor shop in Stormwind into the rain. There soaked in rainwater a passing by paladin saw her and paid for her stay at an inn. Filled with gratitude to this stranger, who to this day still does not know his name, she renewed her dream to become a mighty paladin.

The following day she went to the paladin training and asked to be accepted. She was given a test of devotion, knowledge of spells and strength. Having no formal training in any of these schools she quickly failed. Outside sitting in Stormwind gates she sulked in her failure when a powerful dwarf noticed her. This dwarf learned of her situation trying to cheer her up. When he discovered she wished to be a paladin, he was willing to give her training to the best of his knowledge granted he was a hunter.

The following months she trained under this dwarf hunter in the forests. Fighting animals she trained and learning combat skills. The training was intense, there was little breaks and a lot of work but through it all Taalia's dream to become a paladin was far stronger. She worked hard and through it she learned devotion. With the combat sessions she found strength. However hunter's knowledge of spells were not especially high she had to do that on her own. She used her new found devotion and studied for days the books that were found in the library of Stormwind.

Taalia was ready to retry her entrance exam but this time with better preparation. The dwarf walked her to the doors wished her good luck and turned leave. Taalia asked if they would ever meet again, he replied with a simple 'aye lass'. She passed all three areas with ease and was accepted into the training and started the following day. Taalia was nervous and excited about the whole thing but mostly thankful to the dwarf hunter who gave her that ability. She was an excellent student and absorbed everything carefully. She was not particularly smart but she was ambitious so she studied hard to make sure she understood.

A few days before graduation a couple of other students at the academy knowing of her poor beginnings wanted test her. Telling her that the final test would be to defeat a monster with the knowledge from schooling. Eager to get a head start she accepted. They took Taalia to a what seemed to be a canyon with steep walls. Nervous about getting down she stood over the side studying its size and shape until a snarky classmate kicked her in. Tumbling down she landed safely with some scrapes and bruises. As she patted her self down for any serious injuries an immense roar echoed from the cave on the far side.

A monstrous yeti/ogre like creature appeared. Frighten Taalia quickly reached for her mace but before she could even have a firm grip on it the monster knocked her skywards. Her fellow classmates could do nothing more than watch. When she landed she cringed at the pain that now shot up her left arm that she used to try and absorb some of the impact. When Taalia stood back up the creature lunged at her charging her into the canyon's wall. When the creature backed off, the rocks that were knocked loose careened downwards burying Taalia underneath. The yeti returned to its cave bored of the little challenge that Taalia posed. As it neared the entrance a rumble was heard within the pile of rocks. When the creature turned there stood Taalia her brown hair now bleach white, a pair of angelic wings, and eyes that glowed gold and yellow. As blood dripped down the side of her face she leaped into the air pulled her right fist back and launched it forward as if to hit an invisible target. At that time a golden war hammer of indescribable size flew in from the sky. The hammer met the face of the creature knocking it the ground and vanquishing it. At this time her wings faded, her eyes returned to their purplish hue. Feeling exhausted she fell to her knees.

The training officer arrived noticing all the noise and quickly rushed to aid Taalia. The students were punished and Taalia graduated for doing something that was beyond the limits of the final exam.

From that point on Taalia's hair remained white and could not be changed back. She decided to start her journey as a paladin in Northshire Abbey like many adventuress.

Taalia left and worked hard to become a well known figure. Working hard to become a strong paladin and gaining favor of her Stormwind Kingdom. The tailoring store soon took her in with great honor when she visited.

As time has progressed she mastered the art of mending, art of protection and the art of holy retribution. She has gone through the world of Azeroth helping any and all in need and making many new friends along the way. However from time to time she can't help but think back to those who have helped her make it this far and not even have a name.

When the gates to Outlands were opened Taalia traveled through eagerly. Hoping for opportunities to help others and do good deeds. Through the gates she did her share of work in the Alliance cities. When she arrived at Shattrath she aligned herself with the Scryers. Understanding that they were new and were not welcomed for their race Taalia tried hard to build a reputation for them. Also she was very interested in the Horde paladins who were most commonly aligned with Scryers.

There is where she bumped into the hunter she had once met before, loitering in the bar in the lower city. Taalia crept up and had some a few drinks before approaching him. He recognized her and greeted her cheerfully, she was not sure if it was his personality or the drinks that was so delighted to see her. Taalia and the dwarf talked catching up and sharing stories. There she learned his name was Rorloc the dwarf hunter. They talked and talked and from on became close friends calling upon one another for help when needed.

Though not often seen being used in combat this blade has been with Taalia recently. She named it Seeleschneider (Soul Cutter). At first the blade appeared ordinary but when slaying enemies the blade seems to drain the life and soul of opponents as blue streams seep from their body into the blade giving it a blue glow. It appears that way after every kill the sword grows stronger. Fearing it being somewhat evil she cautiously carries it with her.

This blade mysteriously found its way into Taalia's procession. Even she has no idea where it came from, it was left for her one day as she stayed at an inn. The blade glows red and has an effect to slow those that it has wounded.

On the blade of is etched the following: It takes all the running you can do, to keep in the same place.