He is a quiet troll (when not taunting the Alliance) with a strong curiosity who approaches his work as a hunter the way a mountain climber approaches a cliff face. He knows a battle can be won or lost before the fighting starts.

He feels a strong sense of duty towards his friends, guildmates, and the Horde and there is little he will not do to help them. However, he also has a mischievous side and is not above pelting the unsuspecting with a snowball to keep them on their toes.

Stigg was born in the Broken Isles in a family with three siblings. His father was from a long line of Jungle Trolls who served as peacekeepers and village protectors and was well respected within their tribe. Stigg's mother made ropes for the village fishermen and used to entertain Stigg and his brother and sisters with tales of their ancestors. She maintained that her family was descended from members of the Amani tribe and would tell fanciful tales of her family's exploits against the High Elves.

Stigg was a curious but shy youth who would spend long periods of time away from the village--either alone or with his childhood friend, Boboshanti--studying the creatures that he encountered and practicing his archery and orienteering skills. While never reaching the notoriety that his father's constabulary achieved, among the local murlocs he was seen as a serious threat to their settlements.

When the Darkspear tribe followed Thrall to Durotar, Stigg made a name for himself among the tribe by tirelessly working to help build the initial settlement in the Echo Isles with his father and his father's associates. However, when Proudmore's fleet arrived and drove the Darkspears from the Isles, Stigg's mother, brother, and one of his sisters was killed. His father took Stigg and Saba, his remaining sister, and fled to Malaka'jin in the Stonetalon Mountains. 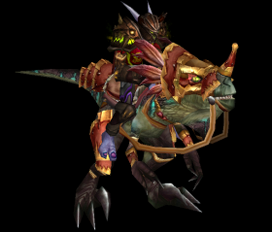 Stigg and his father found work guarding supply lines from Shadowprey Village, in Desolace, to Crossroads, in the Barrens. Even after the Echo Isles were reclaimed, Stigg's family remained in the mountains as his father refused to return to the islands that held memories of loss. Hearing tales from passing merchants, Stigg learned of the newly accessible lands that held the ruins Quel'thalas and of the Amani trolls that lived in the Ghostlands. He left his father and sister and ventured to the Ghostlands to find the trolls of which he had heard tremendous stories.

Unfortunately, the romantic image of the Amani trolls that had been instilled in him by his mother proved to be quite different from the reality of the current state of the degenerate trolls and his notions of returning to a lost homeland crumbled. While amused by the vanity and self-importance of the Blood Elves, Stigg found them to be a complex and interesting race. Having seen what could be found away from the confines of village life, Stigg decided to venture far and wide to build his destiny and find his true place in Azeroth.

Retrieved from "https://earthenring.fandom.com/wiki/Stigg?oldid=30954"
Community content is available under CC-BY-SA unless otherwise noted.