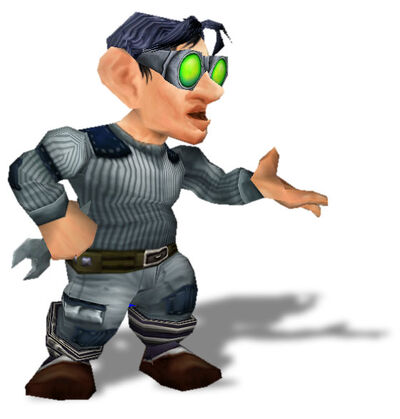 Unlike most of his kind, Sascha is cleanshaven, sporting no beard, mustache or other facial hair. This does quite a lot to emphasize his protruding lower jaw and slight underbite. His large greenish eyes are always shifting, watching for small changes in his environs, or the next interesting thing to catch his attention. Close-cropped dark brown hair spills over the crown of his brow, hanging over in the front in a certain wavy curl.

In dress, Sascha is very utilitarian, preferring clothes that feature many pockets for carrying various trinkets and items. Flame retardency and durability are also a must. Nearly always Sascha wears a set of engineer's Goggles, and seems to sport several pairs presumably intended for different uses.

Sascha is possessed of a certain whimsy at all times that can be infuriating to others and even dangerous to himself on occasion. His meticulous attention to detail is matched only by his inability to focus on any one detail at a given time. Anyone speaking to him might mistake him as mad, schizoid, or perhaps just excessively rude and disruptive.

...anyone given to talking frequently with him, therefore it should be said, has a saintly amount of patience.

In all activities Sascha has an indomitable will and spirit that will not be extinguished or pushed down. He is all at once precocious and incorrigible. He speaks quickly, and often passionately, which makes his sudden tangents all the more difficult to follow.

Sascha enjoys all manners of academic pursuit, but none more than he enjoys the act of invention- imagining that which has not yet come to be. And yet, in his frenzy to create, Sascha often leaves behind many works which others would perceive as unfinished. His workshop is filled with half-done sketches and partially-conceived ideas. This perpetual state of mental chaos however, is his home territory, and he is well-at-ease with this ever shifting landscape of interests and passing fancies.

Herein may be found a list of stories concerning Skunkwerks:

A space for related, but arguably out-of-character information regarding Skunkwerks.

Skunkwerks SKUNK-wurks - The name is a combination of Engineering geekery and German-pop parlance. Skunk works is a division of Lockheed Aeronautics responsible for most of the US Government's so-called "black projects". These are Top Secret forays into aeronautics engineering which have in the past resulted in such marvels as the SR-71 Spyplane, the F117a Stealth Fighter and the B2 Stealth bomber. It's not a coincidence that Skunk is, of course, an Engineer, making him one of two characters I have created whose name is actually a reference to his tradeskills rather than his class.

The German-pop is seen in the spelling of "werks", but also in a lot of the personal touches I've added to Skunk, including his more than passing resemblance to En Esch, formerly of the German Industrial band KMFDM.

That said, it's also an alias I have used online for pretty much the past ten years. My father is a mechanical engineer, my brother an industrial designer, and myself a graphic designer. My family has a history of marrying form and function in our work.

Yes, Skunk is actually designed as something of a Roleplay character, and furthermore, always has been. Fancy that, eh?

If possible when I play an MMO I've always aimed to create at least one character that is in reference to this. In City of Heroes, for example, I also played a character (as well as carried a forums persona) of Skunkwerks there as well. WoW offered a pretty decent environ to do this Lore-wise with the whole Gnome/Steampunk genre within it. I've also always been one not to take myself too seriously, and am somewhat of a joker. Gnome seemed the perfect option for my incarna of choice.