Shizukera Nightfury grew up on Hyjal with her parents, a priestess of Elune and a druid; and her brother, Faisaal, also a druid. Shizu herself had planned to become a priestess like her mother. Then the Third War came, bringing with it her first encounter with the demons of the Burning Legion. Her parents were both killed in the battle, and her brother was gravely injured.

With her parents dead and her brother recovering in the Emerald Dream, Shizu fled from Hyjal and spent the next few years wandering Kalimdor, teaching herself to hunt in order to survive. She eventually found herself at Teldrassil and semi-contentedly wandered the area between Dolanaar and Darnassus until she came across a night elf named Eiyah, who adopted her.

Shizu was quite content for a period of time. She had a family again, and she and her brother rebuilt their relationship entirely, making it stronger than it was before. She simply lived her life, making friends, being with her family, and constantly improving her skills as a hunter. The only truly remarkable event in her life at that time was her father's near-death at the hands of the Horde. The event sparked an uncharacteristic rage in Shizu, driving her to hunt down the Horde in the most contentious areas of the world. Her desire for revenge ended only when she herself was taken prisoner and nearly killed. While she learned her lesson regarding acting without thinking, her natural need to have something to fight for remained.

That opportunity came when the Dark Portal reopened. While Shizu was not a part of the initial push into Outland, she stepped up her training as a hunter, determined to aid somehow in the fight against the Burning Legion and its agents. This desire grew stronger when she became friends with Seizanna, one of the newly arrived draenei, who would eventually become Shizu's best friend as well as her sister-in-law. Frustrated at her inability to truly strike at the demons, and with nothing left for her people's most experienced hunters to teach her, Shizu has recently chosen to retrain her combat skills and to follow another path: that of the demon hunter. While her exact reasons for choosing to walk the path of the demon hunter are not entirely clear, it is more than likely that her friendship with Seizanna - more specifically, her new perspective on the horrors wrought on others by the Burning Legion - heavily influenced that decision. Whatever the reasons, she has sought training from two master demon hunters, one of them being Tharion Greyseer of the Netherbane school. Having been ritually blinded, with the essence of an eredar warlock bound to her soul, Shizu spends much of her time training and working to improve her control over her powers.

She roams a lot and spends most of her time in either Stormwind, Shattrath, or the frozen wastelands of Northrend. Wherever she is, Shizu is rarely seen without her fiancé, the demon hunter Taldarion Shatterbound.

Shizu was recently presented with a surprise: her mother, raised as a death knight following her death at Hyjal, was among the death knights freed from the Lich King's grasp at Light's Hope Chapel. However, she is currently insane and bent on killing her daughter and the demon bound to her - whether Serreina Nightfury can be redeemed remains to be seen.

Being only a handful of centuries old at the time of the Third War, Shizu is very young by night elf standards, and wandering on her own through very dangerous areas for five years had its effect on her, setting her back a bit in terms of maturity. She has a very prominent silly side, with humor being her main defense against the general unpleasantness of the last few years, and she can be extremely stubborn, to the point of appearing obnoxious. She can be a bit flighty in spite of being quite intelligent.

Because she experienced so many losses in such a short time, Shizu is extremely protective of those she loves. If she perceives that someone she cares about is being threatened, she's known to go right out and attempt to deal with the threat in a cold but slightly berserk manner, without really thinking things through. This impulsiveness has gotten her in trouble several times and nearly got her killed on at least one occasion, but she has learned a lot about the importance of patience and preparation. She is less hotheaded these days, although she still has her moments and is starting to recognize that she lacks a certain discipline.

Shizu retains remnants of the sharply defined sense of good and evil that children tend to have, with the darkness (evil) on one side and the light (good) on the other; she has only recently begun to understand and appreciate the rather vast grey area that exists between the two extremes. She is beginning to see the darkness as a necessary companion to the light, in the sense that one cannot exist without the other. If asked why she has chosen to walk such a dark path, her response would be that the demons' own powers are as effective against them as any other weapon, and it would be foolish not to use every tool at one's disposal against an enemy such as the Burning Legion. She would then add, with a certain irony, that her walking the path means her loved ones won't have to.

She also privately feels that revenge is sweetest when one defeats one's foes with their own weapons, though this is another thought that she keeps to herself.

Shizu is tall and wiry, with the general appearance of one who has recently experienced a growth spurt and hasn't quite caught up with herself yet. With her flowerlike facial markings and ever-present smile, not to mention her tendency to purr at people, she has an aura of innocence and youth that belies the traumatic events of her recent past.

She also has a number of scars from her various adventures and misadventures. The two most prominent are both located on her midsection - one runs diagonally along her torso; the other is a smaller horizontal gash across her stomach. Both are easily visible under the leather harness she wears. Also noticeable is a faint set of bite marks around her right bicep, acquired when she fell out of a tree and onto a very angry wild nightsaber. 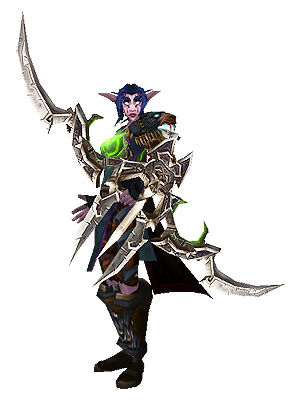 Having survived on her own for several years by learning to hunt, Shizu's hunting skills were naturally the first that she brought to bear against the Burning Legion. When going into a battle of unusual difficulty, she'll be found wearing her sturdiest mail armor, carrying her most powerful weapons.

Her preferred weapon in such situations is a bow or crossbow, though she also carries axe or a polearm in case the enemy comes too close. Her skills with these weapons remain strong, and she can be a rather formidable opponent. 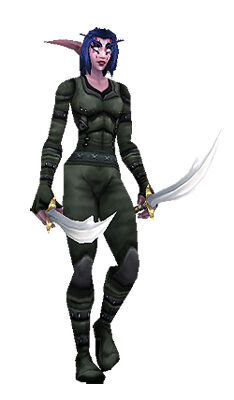 Since starting on the path of the demon hunter, Shizu has begun learning the 'up close and personal' combat style of her primary mentor, Lethraius. She can often be seen wearing lightweight, form-fitting leather armor when she is practicing these new skills. Occasionally she wears a red mask over the lower portion of her face as well.

When she is practicing in this manner, she also carries a pair of swords, with which she easily dispatches most of those who would attack her. She also sees swords as a tool to prepare to use the warglaives she will eventually wield as a demon hunter.

Her 'school attire' far more closely resembles the traditional clothing of the demon hunter and consists of a leather harness, boots, gloves, and kilt. This is the attire that was provided to her when she first came to the Netherbane, and she wears it primarily when in the company of Tharion Greyseer or other Netherbane members.

Shizu continues to carry a pair of swords with her even when she is with her shan'do or her fellow students, 'just in case.' She prefers do be able to defend herself if necessary rather than rely on others to do so, and she has a very strong belief that she should prepared for unpleasant surprises at all times. 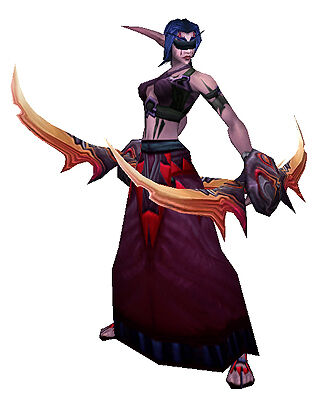 Shizu's future look as a fully trained demon hunter also consists of a leather harness and kilt, though of a different color scheme, with a pair of gloves and minimal footwear or her own bare feet. This attire is closely patterned after that of the most advanced members of the Netherbane and will remain her preferred look as she comes to maturity as a demon hunter. Her upper body is marked with a complex pattern of ritual scars and runes, and she covers her mutilated eyes with the blindfold worn by most of those who follow the path.

Shizu has a strong desire to see Illidan Stormrage fall, and she has developed the habit of going to the area around the Black Temple on a regular basis to quietly pick off the demon hunters being trained there. She acquired her warglaives on one such occasion, and the ascended Shizu derives both power and immense pride from the weapons, which she carries with her at all times.