f one word could be used to describe Seven's outward appearance, that word would be innocent. She looks, and much to her chagrin is also often treated, like someone who's never seen any of the true horrors the world has to offer: death, war, pain and suffering, the wretched abominations of undeath, or worse. She looks like the type of woman someone powerful would keep cloistered safely away from the front lines... ostensibly for her own good, but really to keep her around as something nice to look at.

even came to Stormwind as an orphan when she was only around 5 years old. She never spoke of what circumstances led her to the city, alone, so it was merely assumed at the time she was just yet another orphan of the war with the orcs. The suggestion is usually met with impassive shrugs about the matter from Seven. It's probable she's blocked the events from her mind.

At the Stormwind orphanage, Seven's natural curiosity got her into situations often. She snuck out often and wandered the city, often providing comfort to injured war veterans or grieving widows, both of which were surpassingly common. Her natural kindness was noticed by a passing priest of the Stormwind Cathedral, and through him she was introduced to the Light. She naturally took to it, as the principles of the Light aligned well with her own natural empathy and desire to do good for the world.

As she grew under the teachings of the Cathedral, her deeds built her status within the church heirarchy and she was eventually titled as a Priestess, despite the fact that her devotion to the Light was stronger than her devotion to the rules and traditions of the Cathedral, which she grew to regard as irrelevant where they stood in the way of doing good deeds and serving the Light.

Regardless of her disdain for some of the details of the Cathedral's rules and teachings, she never failed to defend the organization as a whole, playing a quiet but pivotal role in defending the Cathedral's reputation during a scandal involving several of the highest ranking church officials. Her involvement and service to the Cathedral in the matter was unknown to almost all, a fact she was quite satisfied with (being of the belief that service is its own reward). However, several years later, through a series of unlikely events, her actions were discovered by the Archbishop of the Cathedral. When confronted by the Archbishop, she insisted that it remain a quiet matter, but the Archbishop disagreed, officially bestowing upon her the honorific "Fidei Defensor", or "Defender of the Faith". She never uses the title herself, and in fact gets quite embarassed when it's brought up, and tries to change the subject away as quick as possible.

The Founding of Tempora Heroica[]

er reputation quickly spread, and she found herself being sought by a diverse collection of members of the Alliance, who looked to her to assist them in doing the right thing, to purge the evils that plague Azeroth. Her disdain for violence and warfare was overcome by her sense of duty toward those who looked to her for aid, and before long she found herself forming and leading one of the more powerful task forces in the Alliance -- named Tempora Heroica.

Champion of the Bronze Dragonflight[]

pon learning of the mortal threat facing Azeroth behind the then-sealed walls of Ahn'Qiraj, in the form of the Old God C'Thun, Seven took up the task of seeing the sealed Gates opened and the threat behind eliminated; a goal shared by the Bronze Dragonflight, the Brood of Nozdormu. After a long, harrowing series of trials later to reassemble the fabled Scepter of the Shifting Sands, the key to the sealed Gates, she was accepted by Anachronos as the Champion of the Bronze Dragonflight. All of Azeroth, Alliance and Horde alike, amassed enormous armies, the size of which was unrivaled, to the sands of Silithus to unite against their common foe.

The Gates opened by the sound of the Scarab Gong being rung by the Scepter, unleashing a swarm of Qiraji upon Silithus. Pushed by back the combined armies of Azeroth, the threat from Ahn'Qiraj was neutralized.

espite her good reputation with the Cathedral, and indeed in general, it's a poorly-kept secret that the elder, more traditional priests serving the Cathedral view her with varying amounts of disdain, due to the fact that her devotion to the spread of the Light sometimes trumps her respect for the rules and restrictions placed upon priests and priestesses of the Cathedral, leading her to do things that they view as unbecoming of a priestess. Certainly others have been released from the service of the Cathedral for less, but rumors are that the higher-ups in the Cathedral fear that excommunicating Seven could lead to a schism. Not one to care or pay attention to the politics of the Cathedral, Seven pays these rumors little heed.

hough her crusade to defend the Light sent her from one end of the world to the other, by far the most unexpected and momentous event in her life occurred within the familiar caverns of the Alliance city Ironforge. Just passing through, she spotted a night elf astride a horse, standing alone off to the side, watching the bustle of the city pass by, with a troubled look on his face. She approached him and introduced herself, and after some amount of prodding, the tight-lipped elf introduced himself as Kaidenn Moonfyre. Feeling that he was troubled and holding back from her, and wanting to help, she continued to meet and spend time with him despite his initially short, awkward responses and attempts to get her to leave. Over the course of several months, the two grew close each other, as he revealed his innermost secrets to her understanding and compassionate trust. Their growing friendship became a deeper relationship, and soon blossomed into love.

Despite what would surely be strong disapproval from the Cathedral, she came to be his mate; and when Seven was not off spreading the message of the Light across the world, she was with her Kaidenn. The two lived together in Ironforge in secrecy, both for her desire not to flaunt her disregard for the Cathedral's wish for priests and priestesses to remain chaste to the Light, and for reasons of Kaidenn's own, until her capture within Naxxramas.

hile leading her group through an excursion into the Dread Citadel Naxxramas, Seven was captured and taken prisoner by the legions of undead. She was held for several days before a rescue party was able to retrieve her. Very visibly shaken by the event (in the immediate aftermath, she was heard whispering "you'll all die" repeatedly), she stepped down from leadership of her force and disappeared suddenly. So suddenly, in fact, that her beloved Kaidenn wasn't even sure where she had gone to for several months until he found her being hidden away and cared for by night elven priestesses of Elune, very shaken by the memory of the unspeakable things done to her during her period in captivity.

lways an eternal optimist despite whatever personal trials and pain she suffers, Seven almost always greets everyone she meets with a warm smile on her face, and kind words of encouragement and support. She sees the inner Light within even the most vicious and vile people, and will go miles out of her way to help bring the Light into their lives, to make them better people. Her inherent trust in the good that lies in everyone has gotten her into bad (and dangerous) situations plenty of times, but she always manages to find her way out, perhaps lending even more support to her beliefs.

She is very bubbly, moving with a little bit of a bounce in her step, and she often finds it difficult to sit still for long lengths of time.

Those who know her, and her always-on personality, are even more surprised when something does get to her, and she sulks even in the slightest.

However, where there is Great Light, there is also Great Shadow, and a closely-kept secret is that Seven struggles with a second personality living within her body that is, quite literally, the polar opposite of everything that Seven is, called Sin. With great effort, Seven has managed to keep her other half under control of late, but it is unknown how long she can maintain such control (or even if the perception of control is merely a ruse being played on her by Sin). See the (forthcoming) entry about Sin for more information. 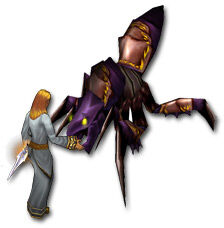 Control, by Thaed
At The Library, by Oriion
Kidnapped!, by Flonne
The Captain, by Minuette 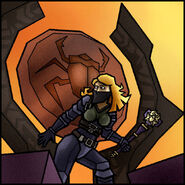 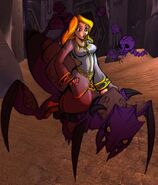 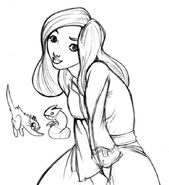 by Asheran
Community content is available under CC-BY-SA unless otherwise noted.
Advertisement