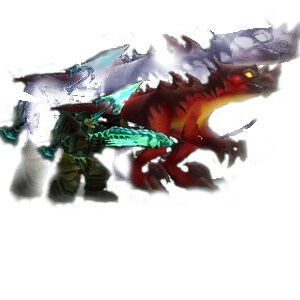 Rorloc was always being wild in his youth and often climbed from place to place. One winter night, out exploring a mysterious gorge in the mountain side of Dun Modr, he encountered an unusual creature. He approached with caution. The creature, injured, was lying still with its mid section moving rapidly to take in air. Rorloc curiously approached it. What he did not know was that it was a wild mother bear. The creature noticed Rorloc and attacked to defend her cubs. Frightened, Rorloc made a quick dash away, unaware of the ice patch that laid around the corner. He slipped down the mountain, severely injuring himself. When he managed to drag himself home he saw that he had a deep gash across one of his eyes, specifically his left. It left a scar that lasts until today.

Aside from his scar he is not much different than other dwarves. His large nose and bushy mustache are his most noticeable characteristic. Rorloc is one of the few individuals who doesn't like stuffy helmets or lengthy cloaks. He also refuses to wear any tabard that would associate him with any one group.

He is an individual willing to face uncertain challenges, but he has recently been taking a more relaxed approach to life-threatening adventures. Rorloc is always willing to help those who are working to strengthen their mind and body. Rorloc also enjoys exploring and seeing new and delightful sights. Any friend he encounters he drags along on his explorations.

Rorloc is also one who enjoys pacing around in the forest, residing in his thoughts in the quiet, peaceful woods. The outdoors always was a place Rorloc felt at home. He is a soldier who is more loyal to his allies and comrades than his own health. Rorloc has never left a comrade laying in the dirt, dust, or trailing behind. Rorloc was never much involved with women, but he does treat any and all with the utmost respect and all the chivalry he can muster up.

Quite an open character, he is usually unwilling to hide aspects of his life with others, but is often the quiet individual in a group, hanging back and listening rather than speaking unless necessary. Unfortunately, Rorloc is somewhat shy to a group of strangers, but once familiar he is surprisingly open.

He grew up in Dun Modr with his parents. His father worked as a marksman for Ironforge and his mother was the owner of a general goods store. However, after the second war was over, his family decided to move out to the less hostile territory of Loch Modan. When the third war arrived, Rorloc's father left to travel with Arthas to Northrend. During that time Rorloc enlisted as a guard. When Arthas came back from Northrend and his father did not, Rorloc was suspicious. When Lordaeron fell to Arthas, Rorloc knew he had betrayed the Alliance and was most likely responsible for his father's disappearance. Rorloc swore the barrel of his gun would stare down on Arthas someday. When the war ended Rorloc had to pick up a job with the city, delivering packages between Stormwind and Ironforge. That is when he met a young human lad named "Bromius". They became friends shortly afterwards, but had to part once Rorloc was ready for his training. When he was old enough, Rorloc headed out to train with the hunters of Coldridge Valley.

Rorloc was quick to learn and eager at that. He picked up many of his skills quite quickly. When he felt he was strong enough he asked to complete a task to train a pet. Rorloc was excited that he would finally gain his first combat pet. He dreamed of doing battle next to an animal companion. He decided to train a bjarn bear of the North Gate Outpost area. When he spotted the white bear he desired, he quickly caught and trained it to obedience. He named the creature "Gilgamesh" after the hero from one of his father's folktales. When he felt confident with his skills he traveled to Stormwind to see his friend. Bromius had become a mighty warrior. When they met again they decided to travel to Elwynn Forest to aid people with their concerns. When they became stronger they traveled to Westfall. There they ventured to many parts, explored mines and battled thieves. They ventured to many parts of the world, but after a long time Bromius could no longer continue for he had personal issues to address. All the mean while, Rorloc joined a guild known as the "Cult of the Krayzar". He grew with them until he became strong. He met many friends amongst the guild, such as Orichalum, Victorex and Prigitia. When Rorloc grew stronger he felt that the Cult was no longer suited for him and he left it, saddened. However, he met some well known individual with a lot of experience, Guyman and Asmodoues. He joined them and entered the guild of lawyers. Now he ventures into the Dark Portal in search of allies against Arthas, new pets, and aid in the defeat of the Burning Legion.

He follows the path of Guyman, Amouretta and Asmodoues in the ways of legal battles.

The bjarn bear which served as Rorloc's first pet, he journeyed far with Rorloc, but he was retired. His old age (for a bear) made him unable to continue battling with Rorloc.

A fiery red velociraptor named Surtr after a god from a legendary tale he heard as a child.

One day during Rorloc's adventure in the Outlands he came across the area known as " Blade's Edge Mountains". There he found a variety of velociraptor he had never seen in the lands of Azeroth. He watched attentively and observed their behaviors. He decided that he must have a creature so versatile. Rorloc approached one of somewhat reasonable size, but when he was feet away the creature sensed him. There the eyes of Rorloc and the one who would become known as Surtr locked. They stared down at one another. The gaze seemed like ages. When the wind on the spiny mountain settled for a moment Rorloc made his move. His years of experience facing these creatures made him prepared. The creature raced towards Rorloc with intense speed, not knowing he had fallen for a trap Rorloc had already laid. Trapped in Rorloc's cleverly placed device, Surtr struggled. After a couple of hours of training and restraining, the creature fell submissive to Rorloc's grasp. At first the creature disobeyed every command, but one day in the pits of the Burning Blade's Ruin, after days of battling and training, Rorloc was facing a powerful ogre mage when, suddenly, a powerful ogre warrior appeared behind. To the great surprise of Rorloc, the once disobedient Surtr turned to the ogre and fought it, distracting him from Rorloc so that he could finish off his first opponent. The mage fell quickly and Rorloc assisted Surtr immediately after. The battle ended shortly, but Surtr sustained serious wounds. Rorloc, with his years of first aid experience, rushed to help his injured pet. After this event the two have become faithful companions traveling to the depths of Mana Tombs and other such areas.

Grendel was a worg pup found in the spiny mountains of Blade's Edge. Rorloc came across the pup alone and scared. It was hustled away in one of the corners in the valley that cuts through the area. The creature instinctively built itself a hut and tried to survive on its own; however, it was only a matter of time before it would die on its own. Rorloc saw the little creature and wanted to help. When he went to try to aid the pup it was violent and aggressive. Rorloc did not give up. He saw it as a challenge. He left food outside the makeshift den until the pup grew used to his scent. Then, when the time was right, he approached the pup, who was by now very malnourished without its mother's milk, and claimed him as his own. Rorloc took it home and cared for it until it was back to full health. He left the creature to the care of his mother who knew enough to take care of canine. After raising it for sometime, Rorloc took him out to test his skill in combat with many wild creatures and beasts. Grendel proved quite powerful and strong in battle, exactly what he expected from a wolf of this type. Its howl was fierce and could renew allies' strengths. Its jaw was strong enough to break bones.

One day the pair traveled into the Cavern of Time to save bits and pieces of history from being altered by a group of terrorist dragons. Halfway into a skirmish, Grendel chased an enemy that was fleeing into the woods. Rorloc felt something was wrong and chased after him. He could not find him despite hours searching the woods. A voice echoed later that night by the campfire, but Rorloc refused to leave. A figure emerged and it was Grendel, but something was different. Grendel became unresponsive, passive and unable to do combat. Rorloc thought it would be best to let him stay in Loch Modan with his family as a pet for then. This is where Grendel currently resides. No hunter, nor druid has figured out what plagues that animal's mind.