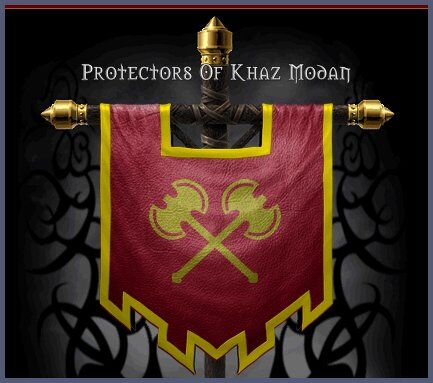 The Protectors of Khaz Modan were formed in late March 2008 and since then have become a well established Rp guild in the Earthen ring society. The Guilds first leader and present leader is Commander Taminak Silverthorn, Lord of the Silverthorn Clan and founder of the Military Council of Azeroth. Taminak was orginally a member of the Knights of Khaz Modan, but left after finding out his Thane-ship with the Silverthorn Clan.

The Ranks of the Protectors[]

Goals of the Protectors[]

The Protectors were set up to safe guard the land of Khaz Modan against the ever increasing attacks from the Horde. Its main aim is to remove the Hoarde from the land,although other small groups of enemies (mainly Dark Iron Dwarves.) are also attacked time and time again to remove them from our lands. The protectors Patrol all of Khaz Modan, therefor having to face such diverse enemies as Troggs to Dragonmaw Orcs from the Wetlands.

The protectors also aim to work with others to improve their lands as well. It has been commonly known that the Stormwind City Guard are close allies with the Protectors. The Protectors Commander Taminak Silvethorn founded the Military Council on the basis he wished to see the Biggest Military and Guard groups work together to form a better protection of the Lands of Azeroth and bring the council members back together again, working under the term Alliance once more.

Overal the Protectors wish to Safeguard the land, as well as bring the alliance back to work as one unit instead of many several smaller coalitions.