Naiama is typical night elf. However, her hair is a mixture of sapphire and silver strands. It may look lightning blue. (This is abnormal for Kal'dorei, and as such she was not born with it. Will be explained below.) Her facial markings are akin to the cut of blades, as the sign of her family.

(As a hunter, archer, and tracker) Naiama has the ability to sense 'presences,' or the individual essence of a nearby being. She has not released how she does this, nor who taught her.

Naiama, now calling herself Naiama'zair because of the manner in which she was saved, has regained 'herself'. However, she doubts she will ever be able to forgive herself for that brief glimpse of time in which atrocities were committed. She is reserved and heavy-hearted by her previous deeds. 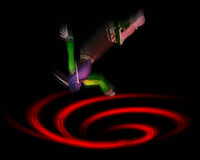 For her crimes, Tyrande charged Naiama to assist the druids in Kalimdor, banished from the capitals of the Alliance until she reaches the Kal'dorei age of adulthood. For a time, she protected the Felwood forests from further taint.

Strangely, the druids ordered Naiama through the newly opened portal to Outland. She obeyed, yet was hesitant at this discrepancy between two authorities. Currently she assists the Alliance in Hellfire Peninsula. She has not returned to Darnassus or Stormwind.