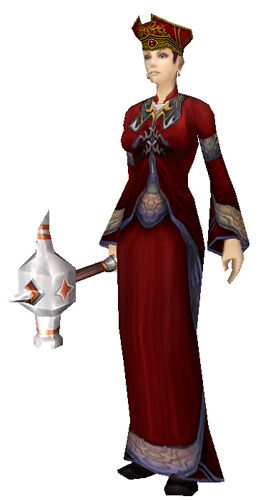 Morganna almost always wears a few tiny potion bottles strapped to her belt, and a large shiny hammer. She has a pale, freckly face and a smile that can be interpreted as sympathetic and warm. A more perceptive viewer will note a cold, calculated quality to her smile, making her face seem rather expressionless.

Morganna was born in 591 in a small house in Elwynn, near Crystal Lake. She was fascinated with the philosophies of the Light from her early years, and vowed to become a priestess when she turned fourteen. She then went away from home and took up residence with the clergy of Northshire Abbey, where she resumed her studies.

Time passed, year after turbulent year, and when Lordaeron finally fell, Morganna decided to move to the Cathedral in Stormwind and get to a place of authority in the Church ranks. The bishops and high priestesses of Stormwind were fascinated with her determination and loyalty to the Light, and in September of 620, after two lenghty missions to Felwood and the Plaguelands, she was promoted to High Priestess by the clergy.

She has assumed her duty. Now, she has gained the authority necessary to make some changes.

For a brief time, Morganna was associated with the remnant group of Magnusson's Ordo Hereticus - a group of religious men and women set out to averting and rooting out the sinners and heretics of Stormwind and its human-inhabited surroundings. During the Scourge Invasion, the actions of the Ordo were legalized by the Cathedral. The group, however, did not last long after the Invasion subsided, and Morganna returned to her duties as a priestess.

After becoming a High Priestess, Morganna was free to openly show her sympathies for the Scarlet Crusade. A battalion of the Scarlets (Scarlet Battalion), led by Sir Saidivh Bedwyr, accepted her into their ranks. She then took it upon herself to legalize most of the actions of the Battalion. Determined to reshape the way the Scarlets are seen by the Cathedral, she negotiated a pact between the two factions, mostly by using irrational fear and pointing out the obvious threat of the Scourge and Kel'Thuzad (Naxxramas had just appeared above the Plaguelands).

She left the order soon after she'd been made Inquisitor.

Morganna has spent the last year cooped up in her cell at the Cathedral, praying and researching in the libraries. She has held a vow a silence to demonstrate her affection for the Light and severed all ties with any groups she was previously affiliated with. Now, she speaks again, and can even be spotted leaving the Cathedral on occasion.

Currently, Katrilis is aiming at a position as a Magistrate of Stormwind. She has a firm backing from the Cathedral, and is doing her best to appeal to as many people as she can. She spends her days at the Cathedral, planning her campaign.