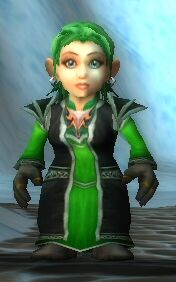 Young and filled with curiosity, Livie views the world with good intentions and a optimistic view in everything she does. This is easily seen in he with her almost constant good mood, smiling brightly to almost anyone she meets. She is usually found in a green dress or simple shirt and pants that match her hair.

Happy-go-lucky to a fault, Livie strives to see only the best in everyone, and makes it her mission to comfort and cheer up any of her friends to the best of her abilities, though her solutions usually involve baked goods in some way. She has also been known to attempt setting up dates between people she thinks would work well together.

Note: Anyone looking for records of Livie's past will find none prior to her arrival at Stormwind

Living a rather uneventful life, by her own choosing, until recent history, there is not much to tell. Before the fall of Gnomeregan, she lived with her parents in their combination store/workshop/arcane research area/house, helping her father build his various inventions, though never knowing how they worked, and pretending to listen to her mother’s lectures on the arcane, for which she has zero talent. Her sister having disappeared some years prior after an argument with her parents, her mother wanted Livie to carry on in her footsteps, though Livie was far more interested in what her father was up to most of the time. When the Trogg invasion hit the city, her family was one of the first to evacuate, leaving long before the incident with Thermaplugg. Lucky to have all made it out together, they traveled to Ironforge, where her parents once again set up shop. Annoyed with the loud noise and constant heat of the city, Livie left to find her own place in the world.

After a short ride on the tram, Livie found herself where she would be calling home, the city of Stormwind. After finding an apartment and moving her things in, she went exploring in the city. Her first, and later more frequent, contact with the citizens was with various members of the Council of the eye, notably Meris, Veras, and Neia. Being the first Gnome she found outside of Ironforge, Livie quickly became friends with Neia, at least from her point of view, and followed her around the city, using her as a guide to the places and people there in. Through her, Livie was introduced to the members of G.E.A.R., becoming fast friends with many members of the organization in a short amount of time. Later, through having excellent attendance to the meetings, Livie was made a member of G.E.A.R., though possessing little knowledge of Gnomish engineering. In a attempt to rectify this, Livie became Neia’s assistant, helping design and craft parts for various projects.

Some time later, a letter would end up taking Livie’s life on a turn for the worse. Her sister, Poeh, having recently returned from her own training in demonology, send a letter to her sister inviting her to contact her. Having not seen or heard word in eight years, Livie jumped at the chance, and quickly found her to talk to and catch up from the last few years. Open-minded and optimistic, Livie ignored her sister’s studies, despite disapproval from her parents, and offer to help her move up into Loch Modan to finish her research. Believing that Poeh’s work could help with the situation involving Leper Gnomes, Livie offered to help for a short while before returning home. An accident, however, left her without memories for the duration of the experiment, during which time a demonic spirit that her sister had been trying to control possessed Livie, and laid dormant inside her. Every time the spirit decided it wished for control, Livie would only remember falling a sleep and dreaming oddly, but not any of the actions of the spirit, for the demon didn’t want to be fully known to her yet. After a guess as to the sudden tinting to her eyes and random memory lapses, she consulted Veras to confirm if something was wrong with her. A positive test for possession left Livie worried about her future, and what she might do to others, be with some interference from the spirit, that memory was erased, and she continued on normally as though nothing had happened. Recently, though, Livie has been showing vast knowledge of Demonic and Warlock magics, and referring to her teacher as "Miss Voidstone," whom she only sees in the mirror.

During a time when most people are celebrating the event of the Midsummer Festival, Livie began to fall into a deeper and deeper depression. All the repressed emotions of pain, regret and anger within her began to break free and replace her usual happy demeanour. On the verge of snapping and being lost to those feelings forever, she found an anchor for herself where she never would have thought to look. Although she had found something to hold onto, to try to make her happy, it wasn’t meant to be. She had began to lose her grip on it, and was slipping away again into her depression once more, desperately trying to cling to her anchor, or to find a new one.

For reasons unknown, Livie passed away quietly in her sleep, her body being found by her sister. Shortly there after, the following note was posted in the Jester:

This note is to announce that Livie Sparklesproket passed away early Monday eve while asleep. She is believed to have passed quietly and peacefully. With no legal will prepared, her parents will inherit her estate and possessions there-in.

Livie was probably best known for her overabundance of optimism and good will to others, as well as her skill at preparing baked goods. Unsuccessful at most other ventures she tried, she would be more than satisfied in her day if she could help at least one person smile honestly. Those that knew her best would surely miss the ray of light she tried to bring to the world.

At the request of her Sister, there will be no funeral for her in the city, believing that Livie would rather have everyone move on quickly to return to a cheerful state than mourn a loss. The family is arranging a private burial.

Death, much like life it seems, is a fickle thing. Given the choice to stay as a spirit trapped between two worlds, or be placed in one, it didn't take long for her to pick where she would wish to go. But to be brought back, she had to give something up, and after seeing everyone else but never being seen herself, she agreed to give up her sight for another chance at life.

With the aid of Fizzlepocket Tweek, She has a small mechanical squirrel that now guides her around the city, acting as her new, albeit twitchy and possibly explosive, eyes.

Livie now resides in Theramore Island where she works for The Laughing Jester. She has also regained the use of her eyes, but keeps her pet mechanical squirrel, Tribble, with her.