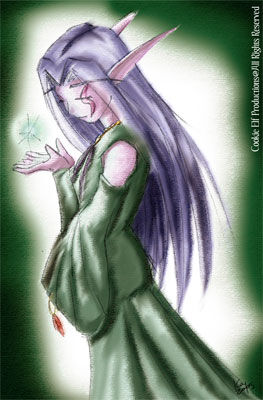 
"She was small. Not taller than any night elf but not shorter than any human. She carries not the strong build of the Kal'dorei Sentinels nor the lean and agile ones of the Kal'dorei Watchers. Her eyes were a moon yellow and her skin a lavender, yet both were pale as if she has seen too much sun and not enough moon.

She walks softly, as if she had no weight, She was pretty enough, beautiful even, yet possess not the alluring charm of the Kal'dorei priestesses. Any trained druid or shaman would notice the spirits that seem to sing around her. Life itself seems to flow from her touch, yet she herself seem rather lifeless."

Litania was found nameless and orphaned along the shores of Northern Kalimdor during the first invasion of the Burning Legion, her parents were assumed to be killed by the invading demons in the seaside village. Her broken body was found amongst the ruins. She was adopted by the kind healer that was apart of the company that day. Under the care of the healer she revived and was officially adopted by the healer as a daughter of sorts. Under her new father's watchful eye, Litania became adept at druidic healing, and was later given a place among the druidic healers of Moonglade despite her young age and gender.

The happy life was short-lived, however, as the invasion came to a near end and Litania's father was lost in battle. She was once again an orphan. Elder Druid Thienal Moonshadow kindly took up rearing the child along with his own student, Etharon Windsinger, and Matheryl Ironthorn, another child Thienal had adopted. Together the three group up happily, often causing more headaches than smiles for their benevolent teacher.

The three grew up in Moonglade, each taking different paths of druidry. Litania under the influence of her father and encouragement of Thienal, became a great healer and was given the title of High Healer of Moonglade. Etharon took after his teacher and became a Druid of the Talon while Matheryl walked of steps of his own teacher, becoming a Druid of Balance.

With the War of the Shifting Sands came another tragedy. As troops were marshaled to Silithus, Matheryl and Etharon were bound by honor to go to war. Litania was bade to stay at Moonglade, amongst the other healers to tend the seriously wounded.

The war ended with seriously casualties, and many of Litania's most trusted healers were lost, torn apart in the claws of the Qiraji. Yet the most sorrowful news has yet to come: Etharon has been lost in the War. As Matheryl was carried back to Moonglade upon the back of a heavily injured hippogryph, Litania knew her time as a healer was going to end.

With the ending of the Wars, the druids of Moonglade was bound to hold up the oath they'd made to Ysera. As Thienal, Matheryl and many others entered the Emerald Dream, Litania with a handful of druids were bade to watch over Moonglade. Ages past, and Litania spent the years in Moonglade, mostly alone with only the trees and the reclusive Remulos, Keeper of the Grove, to keep her company.

With the sounding of the Horn of Cenarius, the druids were reawakened into war. Litania once again was called into battle. Only this time, the losses were too high, and Litania was soon worn from war. With the ending of the invasion, Litania quietly resigned from her position, and was left to wander the world to cherish what little sane mind she had left.

Having left Moonglade, Litania has found solace and company in a small band of adventurers. Though her line of duty is no different from that in Moonglade, she has made several friends in this small party and begins to recover what sanity she has lost.

With the opening of the Gates of Ahn'qiraj and the Scourge Invasion, Litania was once again called to battle. Matheryl, who has risen to Commander in the Cenarion Circle, has arranged so that his childhood friend would stay in Moonglade as Healer (away from harm). Yet Litania would not heed the order, and often tends to follow her friends to the front lines.

Most would say she has no personality (Matheryl would tell you otherwise) as she hardly has any reaction to anything. Most druids would find her pleasant enough, and some would even find her rather attractive. She carries a very mild nature and is usually rather agreeable to most things.

Retrieved from "https://earthenring.fandom.com/wiki/Litania_Moonhaven?oldid=26540"
Community content is available under CC-BY-SA unless otherwise noted.