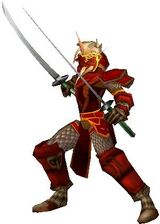 A rather pessimistic Blood Elf, Krassik wanders about without knowing where he's going or what he's getting himself in to. Why he spends his time out of Silvermoon City is his business. Though, one could make an assumption that he's with a militant force of Silvermoon due to his attire, but that person would be completely wrong.

His eyes shine silver, like that of a Night Elf. The mask he wears has some bearing of Night Elf creation because of the portrayal of vines crossing throughout the mask instead of flames. His ears droop down rather than stand upright, perhaps also having to do with his personality.

His right ring finger dons a golden ring and around his neck wavers a necklace of a bloody crescent moon. Two swords are sheathed onto his back along with a rifle. His face shows signs of anger, a furrowed brow. Paranoid, he always looks around in case he's being followed or just for careful measure.

His relation with Berlshenk is difficult to grasp, considering that the two met a few years ago. After getting supplies from Silvermoon via cloak and hood, he was ambushed by Scourge troops situated around the Dead Scar. He partook in a vigorous fight and blacked out after being hit from behind. When he awoke, he was in the Ghostlands and saw a Dwarf eating a fish beside a campfire. The two engaged in a heated conversation, then cooled down when Berlshenk mentioned a special someone of Krassik's.

From that point on, Berlshenk allowed Krassik to become an apprentice of his and taught Krassik about nature, survival, and marksmanship. After a few months of training, the lout of a Blood Elf vagabond turned into a huntsman who could survive for years without communicating with civilization. Unfortunately, after a week upon completing his training, Krassik lost contact of Berlshenk. Rumors began to spread that the "Mountaineer Commander had been kidnapped." Krassik continued the rumors in his head and dubbed Berlshenk as dead when another week passed by. 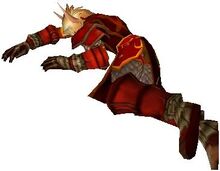 The only piece of information Krassik knew about Berlshenk was that he was helping him because of a certain someone's request. Who ever that person was will never be known, but since no new official information was uncovered, Krassik believed somewhere in his mind that Berlshenk could still be alive. Maybe he could figure out who that someone was. But first, he'd have to get stronger; then the hunt would begin...

Mostly cloaked in red or white, Krassik never shows his face unless he needs to eat or drink. His eyes glow a bright silver, and his ears droop down, as if irritated by something. His brows are never unfurrowed, and his gaze moves around, looking as if he's expecting something to hit him at any second.

Short, but strong, Krassik's height is only a measly 5"4. His pure blonde hair is uncared for, but feels smooth and soft.

Retrieved from "https://earthenring.fandom.com/wiki/Krassik_Venarius?oldid=24313"
Community content is available under CC-BY-SA unless otherwise noted.