Not much is known about Khuldrak, except for his exile, but even that is kept to the closest of the troll's friends. It is said that he migrated with the Darkspear to the Echo Isles long ago, but then was casted out for some unknown reason (perhaps his eyes). Between this time, there is a void, but then Berlshenk placed a bridge over the gap, and uncovered Khuldrak's recent hiding spot in the deserts of Tanaris.

Since then, the two became companions, and even though Khuldrak refuses to disclose his past, they have no ill-feelings towards one another. The troll acts rather wise, despite his young features, and seems as knowledgeable as the great Velen himself; that is, however, untrue. For the most part, however, Khuldrak is just simply intelligent.

After the fall of the Vorisswa, Khuldrak decided to expand his horizons and get back in touch with the outside world. He has been traveling ever since, and his knowledge grows more with every passing day. Khuldrak is known for his ability to fight with a katana, and is very practiced with the weapon. 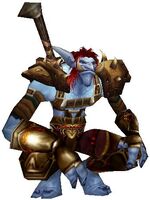 As Berlshenk journeyed throughout Azeroth, he met a very wise troll in Tanaris. The meeting was rather odd, for the troll saved his life when he was near death, instead of taking it like other trolls would. Because of this act of kindness, Berlshenk has been in debt and in friendship with the troll ever since.

It was a slim chance, but any lead was good enough for him. Berlshenk, alone, traveled throughout the deserts of Tanaris, searching for Vorisswa members that were believed to have been hiding out in a secret area unknown to any travelers. However, not only had he failed to find the area, but he almost lost his life due to his recklessness. Dehydrated, demoralized, and supply-less, Berlshenk believed his end was going to be bleaching under the hot sun.

When he awoke from his unconscious state, he discovered himself in a cave, with food and water beside him. There, he met Khuldrak Khazgalan, an exiled warrior. Rather than repay the troll with hostility, Berlshenk decided to converse with the troll. It was then the two would become best of companions.

Khuldrak is like any other troll, as far as physical appearance goes. Spending so much time in Tanaris imbedded grains of sand into his fiery red hair. Berlshenk also noticed this, and assumed that the troll had spent a majority of his life in the deserts. Khuldrak, when prompted with the question, confirmed the dwarf's curiosity.

However, as far as lineage and physical appearances go, nothing else was uncovered about Khuldrak, other than that he has a relation with Night Elves and that he was exiled long ago. From whom is not known, and the troll believes it is best if it's kept that way. Frankly, most of what he told Berlshenk was usually kept to himself, so the two seems to be much more closer than others think, if anyone knows of their relationship.

During Berlshenk's time in Tanaris, Khuldrak assisted him in finding any traces of the Vorisswa. Khuldrak helped Berlshenk across the deserts, and also kept him alive because of his knowledge of the area. In the end, the two were able to uncover information about the Vorisswa, and Berlshenk set of thereafter to continue his search.

Khuldrak appears old, but seems to hold the vigor and energy of a ten-year old human. He is quiet and calm, but very friendly when people come to know him. When he caught wind of Berlshenk's victory against the Vorisswa, the troll decided to come out of his isolation and explore the world. 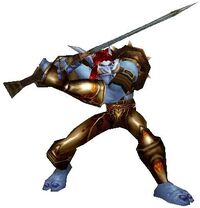 It would be a few months until he came across Berlshenk again, this time in the jungles ot Stranglethorn. They conversed, shared stories, and ventured throughout Stranglethorn. As they traveled, Berlshenk opened his fears to Khuldrak and believed that the Vorisswa was still alive. He explained his plan to fake his death and try to uncover more of the Vorisswa's plans during his absence from the world.

Khuldrak understood Berlshenk's plan, and also understood what dangers he was facing. He also was aware that he wasn't the only one in danger, and decided to keep tabs on Berlshenk's other companions, which he still does to this day. When he finally caught word of the Mountaineer Commander's death, Khuldrak hoped his search would prove fruitful.

Khuldrak has red eyes that are glowing faintly, and a fiery red ponytail that glitters in the light due to sand ingrained within his hair. His face carries wisdom and guidance, and looks very calm. He walks gracefully, and doesn't seem to believe that anything life-threatening will happen.

His tusks are non-existent, and he is able to close his mouth properly. When he speaks, he speaks clearly, concisely, and slowly, each word carefully chosen, but yet allows the listener to understand that his slowness isn't caused by ineptitude from the language.

Despite his wise face, his body seems to bear no scars and looks well defined. Muscles are apparent, and Khuldrak seems to carry himself as if he was very youthful.