The Glowember family line is shrouded in mystery. Any documentation relating to this family has been lost over time, destroyed, or is simply unavailable. The only known surviving family members are Khelandros and his twin sister Aeoar. Their father, Khisanith, disappeared years ago and has not been seen since. The Glowember family is from the nation of Gilneas, though the twins do not know this. Their father kept their heritage from them.

Khisanith raised the twins on the outskirts of Silverpine Forest. Being twins, they were very close, having a natural bond between them. Their father built upon that bond throughout their life, teaching them how to read each other. This became exceptionally useful when they began to learn how to fight.

Khelandros had a natural affinity for all things orderly and precise. It came as no surprise when he told both his father and his sister that he had enlisted with the Silver Hand and was going away for training. This was an exciting time for him, but it was also a very scary time. The twins had never been apart for an extended period of time. Talk of a plague spreading also caused concern for the twins, knowing that Khelandros' military duty might place him in considerable danger.

So the twins separated... but they would meet again.

Khelandros joined the Silver Hand in the year 609, and was only with them for a short period of time before they were disbanded. The Order was devastated by the young prince's betrayal, Khelandros among them. He idolized Arthas, almost to the point of worshiping him. When he found out about what had happened, Khelandros' whole world crumbled. He felt wholly responsible for Arthas' actions and found it hard to look people in the eye. He started to feel that the people whom he swore to protect looked at him with the same horror and disgust as they would Arthas. Very soon after, he shed his armor in an effort to hide who he was.

Unable to bring himself to face the people of Lordearon or his family, Khelandros began a life of wandering. His travels led him to Northrend, where he would find some solitude in the frozen landscape. He came to a small fishing village where he would spend some time with the local inhabitants, a race of walrus-like beings. They were nice enough and didn't ask any questions, even when the sack containing his silver armor spilled, revealing it's contents.

Over the months, Khelandros sank into a deep depression from which he could not escape. Leaving all of his possessions in the small hut in which he was allowed to stay, he left. Walking headlong into the snowfall, Khelandros disappeared from view, swallowed by the harsh weather of Northrend. This would be the last time Khelandros would be seen before the change.

It was during this time that Khelandros came into contact with the sword Wyrmsfire. Having wandered the frozen lands of Northrend, he had wandered into an area known as the Dragonblight. This was the place where dragons went to die, and in his moment of weakness, he sought to end his life. Throwing himself off of a cliff, he fell into a deep cave where he found the sword. Perched atop a dias, the runes glowed with a bright light as frostfire danced across the blade.

Khelandros grasped the hilt of the the sword and the frostfire raced up to engulf his entire body. Wyrmsfire had bound himself to the young knight, and was now able to speak to him. Now having the ability to perform the task for which he was created, Wyrmsfire guided young Khelandros on a path of destruction. Together they tracked the Scourge army to the area known as Icecrown. But the might of the Scourge and their sheer numbers overwhelmed and captured Khelandros.

Khelandros accepted the offer of the Lich King. In a final test of loyalty, a cage was set before him with a hunched figured contained inside.

The last words she would hear from her brother were 'Farewell sister. I need you no longer...'.

After having left his sister to fend for herself, Khelandros tracked down many of the undead and started a violent killing spree. With each strike of the sword, Wyrmsfire gained in power and further tightened it's grip on Khelandros. By the time he made his way to the base of Icecrown, he was no longer the man he used to be. It was here that he knelt before Arthas, and accepted the gift of being Knighted by Death.

Unlike most death knights, Khelandros never died, he freely walks the path of a Death Knight. He is still very much alive and in control of his own actions. He is extremely loyal to Arthas and was given control over a small unit of Death Knights, which he called The Frost Knights. Khelandros is a fierce combatant, relishing in the delight of striking down those who oppose him. Due to this, he is referred to by many as The Dark Destroyer.

After Arthas' defeat at the hands of Highlord Tirion Fordring, the connection between Khelandros and his Death Knights shattered. The sudden disappearance of Arthas' presence from his mind left him reeling. The sudden realization of what he had become and what he had done all came flooding back. Horrified by what he had become, he sought out King Varian Wrynn in Stormwind. As he walked through the streets, the citizens threw garbage upon him, but he never retaliated. It was the longest walk in his life. The King showed him favor and mercy, re-admitting him as a member of the Alliance.

Khelandros has since found the beginnings to a path of redemption through a group of known demon hunters, who call themselves the Netherbane. He has allied himself with these people in an effort to better understand the demonic side of him, that of the draconic runeblade Wyrmsfire. In return for their help, Khelandros instructs the demon hunter students in military combat manuevars. Having been a member of the Scourge, he is also well versed in their tactics and weaknesses, knowledge which is also passed down to the students of the Netherbane. 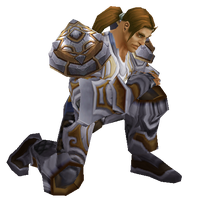 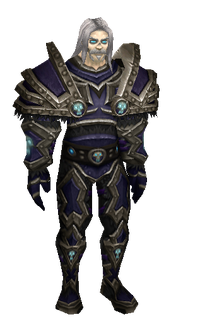 Throughout his life, Khelandros loved all things military. He led a strict organized life, much to the chagrin of his less organized twin sister. His appearance was kept well groomed: he had long brown hair that he kept tied in a tail. He kept his face clean shaven, and his clothes were always well maintained. This attitude followed him and served him well during his time as a member of The Silver Hand. He wore his armor with pride and kept it well oiled and polished. He stood proud, weilding his hammer and the Light as a protective force for good.

Shortly after aquiring the Dragonblade, Khelandros' appearance changed drastically. His once brown hair, now stone white, was no longer tied neatly behind his head, but now hung loose and whipped wildly around his face. His once tanned skin had lost its color and took on the hue of the snow around him. He had donned the dark armor of the Death Knights, adorned with grizly skulls, flashing their toothly grins of death. He kept Wyrmsfire strapped to his back at all times, the swords runes glowing brightly in a sea of darkness.

In the days following the attacks of the Burning Legion, it was apparent that the people of Azeroth would be overwhelmed and utterly devastated by the demons. As guardians of the world, the members of the blue dragonflight deemed it necessary to create certain artifacts of power to assist the mortals in their fight. To this end, several of the dragons met in the depths of the snowly region of Northrend called Dragonblight. It was here, in the dragon graveyard, that the sword would be forged.

Created from the very ice that formed the land, and tempered by the dragons firey frostfire, the massive blade took weeks to perfect. In the final moments of creation, the name Wyrmsfire was etched upon the blade. Carved in the ancient runes of the dragon language and infused with the magical ley energies that the dragons swore to protect, the sword was all but finished. There was but one final task that remained: to transfer the essence of a spirit of a blue dragon.

In a ceremony that shook the caverns to its foundations, the dragons called upon the spirit of one of their brothers. The essence of Wyrmsfire, for whom the blade was named, was bound and sealed to the sword.

On their way to deliver the artifacts, the dragonflight came under attack and the sword Wyrmsfire was lost. Landing in the snowy fields of the dragon graveyard, it fell into the depths of a cavern and waited. For 10,000 years Wyrmsfire waited to be found and used for the purpose for which he was created. That day came when a young soldier, on the brink of self destruction, fell into the cave and discovered the blade.

True Neutral. Having served on both sides of Good and Evil, Khelandros has a good handle on where true neutrality is.

The choice to serve as a Death Knight was his alone to make. He does not regret his actions, for without the choices he has made, he would not be where he is today. With that said, Khelandros does not truely believe in Right or Wrong. Light or Dark. Good or Evil. He does, however, believe in a rigid structure based on loyalty and honor. He believes in the saying "My word is my honor, and my honor is my life." He lives his days strictly following this code.

Khelandros has served under both extremes of the Light, and the Darkness. He is a strict follower of Neutrality. He believes that both are different sides to the same thing, and without one, the other cannot exist. He believes that Neutrality is the scale that holds both the Light and the Darkness in check. If the balance were to tip too far in one direction, then chaos would ensue and all that is... would cease to exist.

Khelandros fights to ensure that Balance is maintained. This is why he chose to walk the path of the Death Knight. With the knowlege of the Light, and the powers of Death, he is better equipped to help maintain that Balance, for the sake of the world.