Kael is a very sarcastic person, his involvement with the dark arts has developed his morbid satisfaction for watching others suffer physically, and it carries over into emotional and mental anguish as well. He hardly ever laughs unless something malefic is happening and then, only a thin smile and a small chuckle might escape his lips. Despite his lack of sympathy for most living things, and his enjoyment out of manipulating his demonic minions, Kael hates the real demon threat and everything the burning legion stands for. He knows well enough about rules and politics to play along as long as they are in line with his agenda. And although he may be civil with the Horde at times, he gets his most enjoyment out of torturing them.

Kaeluc has a stern look constantly covering his visage. Sis cold, slate blue eyes are covered partially by his auburn hair but a faint green glow can be seen radiating from them. He walks in a stiff manner, but carries himself with a great confidence, bordering on arrogance. His head is downcast, trying to avoid eye contact as much as possible. He is clad in dirty travel robes of every variety of dark color. Around his neck hangs a glowing blue pendant in the shape of some demonic rune, and at his side he carries an enchanted long sword. Hung to his back dangles a demonic staff pulsing with evil energies. Kaeluc's every move is one of careful calculation and a hint of paranoia, his hands always in his pockets preparing for some horrifying spell.

Travel Robes:
Kaeluc only wears these garments when he is preparing to go on a long journey, they have been magically enchanted to help protect him against bitter cold and scorching heat. It mainly consists of hood and face coverings with sturdy shoulder pads and a light robe with well padded boots. Among the items usually carried while traveling are a lantern for when it gets dark, and a small knife used for cutting up kindling to start a fire.

Summoning Garb:
These robes are imbued with very complex demonic spell work which allows Kaeluc to summon fel creatures into this dimension. It isn't impossible to summon without these articles of clothing, but they significantly reduce the strain on the caster, allowing more spells to be cast before needing rest. There are also enchantments in the artifact he carries that allow him to maintain control of the demon once it enters this plane. Without it the creature might run amok or even turn on the caster. 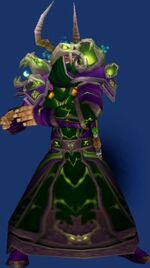 Battle Garments:
This outfit is made of strong and thick material designed and enchanted to withstand impact from melee and projectile attacks. It also has a small amount of protection against spells and curses. The weapon of choice is a cursed blade wielded with one hand, leaving the other free to perform the hand motions for any spells he may wish to bring down upon his enemy. 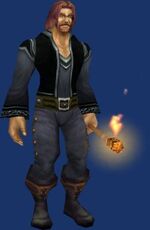 Civilian Attire:
This is the apparel that Kael chooses when he is walking openly through town and wishes to remain discreet. Being what he is, Kaeluc is not particularly welcomed in many towns or villages. Even when he attempts to accomplish a good dead he is outcast and told to leave quickly. Therefore he wears a mask while practicing his magic as much as possible in order to conceal his true face from the general public.