Start a Wiki
' Define either Guild or Group.

Journey is a casual and mature guild with a light roleplay, raiding, and overall atmosphere for those who want to experience the game content offered but are not pressured to do more than they can, all in all a "Casual Raiding Guild." 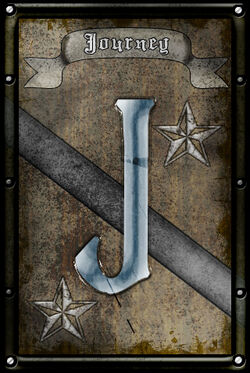 The Story of the House of JourneyEdit

Non-RP History: "Journey" was actually derived from another guild that disbanded in the past called "Midnight Tram" which in fact was also derived from "All the Kings Horsemen." Midnight Tram was lead by Kades (Anatherion); but in its short, but fast life died one day. "Journey" was founded by "Avail" (who is now Kuraudo) but later on passed leadership to someone he knew would be able to lead with a iron-fist. Ishada became the new guild leader, but Kuraudo remains her right hand man. Together with the help of Luciius, Khellian, Altruisa, Daimeon, and many more, the founded the guild "Journey." It remains today doing raids, building friendship, and earning the trust of the Earthen Ring community. --Kuraudosoul 20:00, 19 April 2008 (UTC)

Retrieved from "https://earthenring.fandom.com/wiki/Journey?oldid=30226"
Community content is available under CC-BY-SA unless otherwise noted.