Start a Wiki
' Define either Guild or Group.

The Ironspike family is first and foremost a brewing family. The Ironspike's come from a long line of soldiers and Mountainguard which explains how the Ironspikes remained a small family despite their renowned fertility. The family is also known for having traditionally brewed its own ale and the Ironspikes have long been respected as brewmasters.

Near to four hundred years ago Belgrum Ironspike set down his axe and started the family brewery. He married the much younger Bernnadette of the Bronzeshield clan and they had nine sons together (and one stillborn daughter). Six of their sons are still living and four of those work in the brewery.

After Belgrum died Bernnadette married his cousin Brock Ironspike. Brock was a Rifleman and was content to leave the running of the business to her. They had seven sons together and were "trying to catch up" to her and Belgrum. They likely would have, too, but Brock died in battle shortly after the dark portal opened. Five of their sons are still alive and two of these work in the brewery also.

The recent wars and political instability across Azeroth have meant the end of many successful businesses but the demand for a good ale seems to only increase as people's reasons for drinking it multiply. The Ironspike Brewery has recently expanded its operations. Bernnadette has unofficialy stepped down as the head Brewmaster (she is "on sabbatical") and has left the running of the brewery to her eldest son, Belgar, whose love of the trade is on par with his father's. Belgar had taken a sizable amount of the family's vast savings and is doubling the size of the brewery in preparation to go global with their ale. Bernnadette, meanwhile, has been freed from the constant demands of running the business and is now actively seeking business contacts to help her family find new markets for their prize ales.

The Grey Tiger Shipping Company caught Bernn's eye and the company and her family have been successfully shipping ale and manipulating local politics in Ironforge to their mutual benefit. She was delighted to learn they wouldn't shy away from "getting their hands dirty" and has been especially impressed with the business acumen of one of the owners, Tai Jiang. The brewery and the tigers are now business partners in several mutually profitable ventures and seem likely to stay that way. 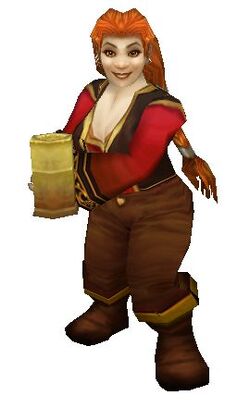 The undisputed matriarch of the Ironspike clan. Bernnadette is a proud and commanding dwarf posessed of an enormous self-confidence. Her family and business are one and the same and all of her sons mind her well. Her dozen or so daughters-in-law respect and fear her and her grandchildren and great-grandchildren very nearly worship her. Respected also by her own clan, the Bronzeshields, as well as her six younger sisters and their families, and her loyal patrons, this woman wields a great deal of influence in Ironforge. She is, indeed, a dwarf to be reckoned with.

Bernnadette prefers to be known as "Granny Bernn" or simply "Bernn" to her friends. She is affable, outgoing, charismatic and quite perceptive when it comes to social currents around her. She bargains hard and is always willing to walk away from a bad deal since she already has all that she needs. She is prodigiously proud of her sons and will brag about them, their children, and their children's children to anyone willing to listen. She is especially fond of Belgar, the eldest, since he reminds her so much of her first husband and Modax, the smith, who reminds her a great deal of her father.

These days Bernn is "on sabbatical" though since she is pushing 370 years it is doubtful that she will return to the brewery full time. She's left her business for the most part in the capable hands of Belgar (though she continues to provide advice and suggestions - asked for or not). Bernn is taking time now to visit family and old friends and to travel the world. She's also made a few new acquaintances who've impressed her a great deal.

She is always in the company of either her bear, Belgrum, or her wolf, Brock. The two animals were named for her two husbands and she often talks to them as though they really were. It is, perhaps, her one eccentricity. 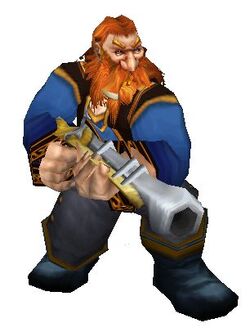 Thorvauld would have been a black sheep in any dwarven family that wasn't so completely pragmatic. Among the Ironspikes he has traditionally been the one to "get the job done" when a certain "job" needed "doing." Smuggling and forgery are his specialties though he's also stolen, killed and even practised barratry for his clan. He keeps a low profile among other dwarves, not wanting to bring any hint of disgrace on his respected family name, and tends to stay away from Ironforge.

In recent years the business and the family's influence have continued to grow. With new allies and resources to call upon when things "get sticky," Bernn has had fewer dirty jobs for Thor. She suggested that he seek out employment with the Tigers, partially as a sign of friendship between the two families and partially because she thinks he'll do quite well for himself there. Thorvauld had a hand in running a smuggling ring in the mountains south of Ironforge but after a battle went badly he decided to skip town and start over. He agreed to go and find out if these Tigers who have so impressed his mother will live up to the high expectations her clan has of them.

Bernn's fourth son from her first husband, Thorvauld is nearly three hundred years old. To hear him tell it, it's "aboot time 'e settled doon and got a reel job anyway." 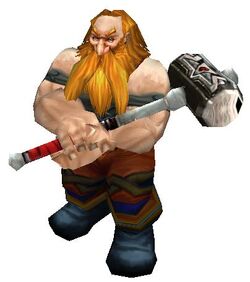 Modax Ironspike is Bernn's fourth son by her second husband Brock. His hair is fairer than his brothers and he bears a striking resemblance to Bernn's father, Harnn Bronzeshield. Apprenticed at a young age to his uncle Stron Bronzeshield, Modax learned the art of working with steel. He works at the Bronzeshield's forge in Ironforge and will likely take it over when Stron passes away since the man's sons are in the Mountainguard.

Modax and his mother are very close and he watches out for her interests. They stay in contact when she is away from the city and he keeps her appraised of the politics, gossip and local news. 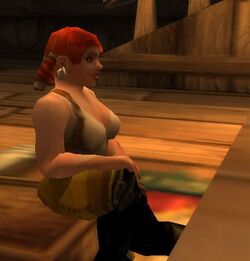 Rosenwyne has the sort of fresh-faced, enthusiastic naivete that is alternatively both quite endearing and extremely frustrating. This is undoubtedly doubly true for her father, Lorzo Ironspike, whose desire to keep his only child safe and hale is often taken as overprotectiveness by his willful daughter.

But then, Rosenwyne is at that age where the well-intentioned meddling of her elders is always taken poorly. In fact, the only person that Rosenwyne would never dream of questioning is her grandmother, Bernnadette, whose word is inviolate to the young dwarf.

She remains as precocious as she is determined to land herself in trouble, trusting on her sweet disposition and the fact that she has the majority of her uncles wrapped around her finger to get her out of most scrapes.

Retrieved from "https://earthenring.fandom.com/wiki/Ironspike?oldid=23354"
Community content is available under CC-BY-SA unless otherwise noted.