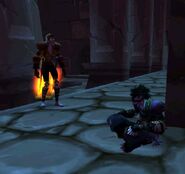 Sannia and Krelle sketch out a plan 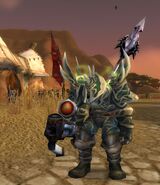 Tellas negotiates a deal over a drink in Ratchet

Sannia and Roh'rik set a trap for a target 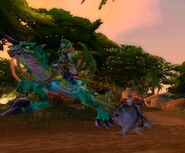 Korttie leads a run through the jungle 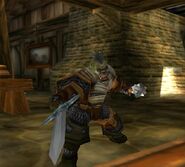 Roh'rik makes a point
Add a photo to this gallery

In the back alleys, darkened corners of taverns, the back offices of public officials, even the inner sanctums of the church, some say that the Grey Tiger Tong is more than meets the eye. To the casual observer, the Tong is simply a merchants' civic organization dedicated to improving their communities through successful local businesses, such as the Gray Tiger Shipping & Freight Company in Stormwind and the Savage Coast Fishmonger Company in Booty Bay.

There are, however, whispers that the Tong conceals a vast, shadowy business syndicate that deals in smuggled goods, protection rackets, gambling, loan sharking, even hired hits. Cynics are sure that a large part of their success in the business world is due to their willingness to use graft, extortion, blackmail, and force, even brutal force ...

For those in the know, the 'made' members of the Tong are rogues, warriors and hunters - the tip of the spear, so to speak. The 'made members', called Tigers, are known to be exceptionally loyal to the Tong. They are also rumored to honor their contracts as if they were blood oaths.

Though the origin of the organization, like the group itself, is shrouded in secrecy, some who make their living at night (who might know better than others) suggest that the Pan-Azeroth Trade Company, a respected Goblin-run business based in Gadgetzan, was nothing more than a front for the illicit activities of the Grey Tiger Tong. The Company has long denied such rumors, as well as the Company’s involvement in profiteering during the Wars.

The Tong itself is rumored to have originally been an elite security force hired by Pan-Azeroth Trade Company to protect its assets and carry out some of their more legally-questionable business tactics. Over time, the security force, driven by the need for secrecy and loyalty, developed into a full-fledged Tong – ultimately becoming independent of the Company. Despite this split, the Tong is rumored to still be intimately associated with Company business – though no one knows for sure.

The Tong is a cross-faction guild, and works with the Gray Tiger Tong.

Most folks understand that the Tong has several public faces, including legitimate businesses like the Gray Tiger Shipping & Freight Company and the Savage Coast Fishmonger Company. Given current tensions between the Horde and Alliance, Tigers of either faction are not open about their connections 'across the border.'

The Tong, however, is a bit more mysterious group. Tigers typically wouldn't speak about the Tong first to strangers, instead referring to particular companies. For those who are aware of the Tong, the public explanation is that it is a benevolence society (which is true of real Tongs) made up of local merchants.

The Tong is not evil. In fact, the Tong is neutral, and perfectly happy to accept contracts from a variety of clients. There is a strong sense of honor in the Tong; a promise (or contract) made is a promise kept. Furthermore, the guild is premised on skirting the law, not flaunting it; in fact, we keep up at least a superficially friendly relationship with the law.

Aside from the legitimate business covers, the Tong is typically involved in the following type of work

To do all this, the Tong is presumed to have powerful goblin connections, a network of NPC Tigers as well as contacts around the world, and extensive influence among guards and legal officials (if not PCs, then NPCs), shored up either by bribes or blackmail.

Dormant characters (a potentially reversible state) are struck out, like this.

Retrieved from "https://earthenring.fandom.com/wiki/Grey_Tiger_Tong?oldid=25392"
Community content is available under CC-BY-SA unless otherwise noted.