Morgrim Greenhooves was calved during the nomadic years before Thrall's arrival and the settlement of Mulgore. The Greenhooves clan had always concerned themselves with finding decent farmland and grazing for their Kodo herds. Morgrim's father disappeared with a group sent to investigate Un'Goro Crater as a possible homestead. His mother, Kana, soon remarried a shaman from the Spirithooves clan, and gave birth to his brother, Rhadgar.

Shortly afterwards, Cairne united most of the clans and established the Tauren nation in Mulgore. The Greenhooves clan, along with their cousin clans, the Spirithooves and Blackhooves, settled a hidden valley south of Red Cloud Mesa. Kana, eager to see Morgrim's father's bloodline continued, began to look into marriage prospects for her eldest. Around this time her eyesight began to decline. 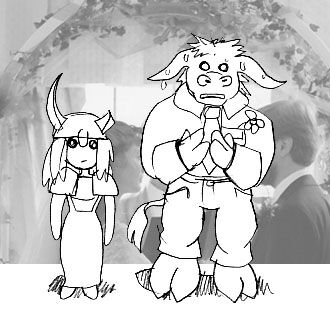 Morgrim soon grew weary and wary of his mother's matchmaking. Several marriage meetings passed, each with worse results. Kana, with her failing eyesight and stubborn demeanor, made one last attempt. While returning from a supply run to Camp Taurajo, she happened on a tanned female human warrior wearing a common horned helm. Kana interpreted her as an extra petite Tauren female and, with her broken Tauruhe, an exotic find for her son. Taking the bewildered lady home, she acted quickly. Morgrim returned from the fields to find a party in full swing. Ushered to his mother's side, he found a tiny hand thrust in his and his mother announcing the engagement of her son to the foreign "Tauren". Once the shock subsided, Morgrim finally looked at his bride-to-be. Kana had dressed the now thoroughly confused human in traditional robes but had left the helm on, still thinking the horns real. Realizing his mother's error, he moved to correct her. Kana however, expecting resistence, played her last card. In front of the guests she brandished an offical sanction of the engagement registered with the new government in Thunder Bluff, with Cairne's hoofprint.

Greenhooves joined The Thundering Horde during his time in the Barrens. As guilds went, they were an easygoing bunch and one of the then few alternatives to the mega-guild, The Blacktooth Grin Clan. Not one to rush, Greenhooves explored a good patch of Kalimdor before crossing the Maelstrom to continue his training. When he finally moved on to Stranglethorn and the Eastern Kingdoms, TH was absorbed into The Kalimdor Headhunters. Green suddenly found himself in a much more boisterous crowd, who also encouraged him to accelerate his own skills. Still, not one to be rushed easily, he arrived at his 60th skill rank a good 8 months later than most of his comtemporaries. Recently KHH has undergone a mutation into the Raiders Of The Lost Orc, and just when Green was finally getting used to the purple & gold and tiki motif too.

Greenhooves now tends to meander across Azeroth, between delves into Blackrock Mountain and raids on the Scourge holdings in the Plaguelands. Also memories of the frequent Alliance raids on the Crossroads and Tarren Mill prompt him to seek out Horde factions enlisting aid against the Grand Alliance. Recently, Greenhooves has become aware that the Lady in the Horned Helm has been following him, especially while in the Eastern Kingdoms. If only he could deduce her motive...

Morgrim Greenhooves has disappeared. On a recent trek through the Swamp Of Sorrows, he had heard of agents of the Burning Legion congregating in the Blasted Lands. Not one to cry alarm rashly, Morgrim decided to head in and scout the situation personally before alerting local forces to the potential crisis. He hasn't been seen since.

An intercepted communique from Nethergarde Keep reported a lone Tauren being chased toward the Dark Portal by a rogue black dragon. Shortly after, a larger than normal energy discharge was seen from the same direction. Horde officials at Grommush Hold have listed Stone Guard Greenhooves as MIA and notified his clan in Mulgore.

Greenhooves has come a long way from the farm. A seasoned veteran of several campaigns in Alterac, the plaguelands and other conflicted areas, he views the Alliance, particularly the Ironforge Dwarves, with disdain, having seen their rampant incursions in Horde territories. Green's not so jaded to to hate the individual though and will aid anyone who seems to be over their head. Also he's developed a bit of a wanderlust and often pokes around Alliance lands exploring and observing, albeit from a distance.Greenhooves feels a certin kinship with all hunters, regardless of affiliation.

Retrieved from "https://earthenring.fandom.com/wiki/Greenhooves,_Morgrim?oldid=16907"
Community content is available under CC-BY-SA unless otherwise noted.