A Gnomish Story for Winter VeilEdit 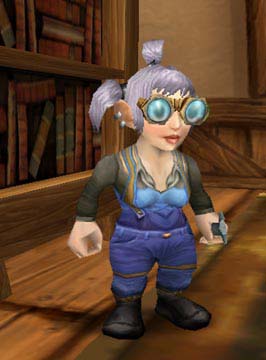 The explosion shook the inn, rattling the windows as well as Allison’s nerves. “Damn that gnome” she growled. She threw her cleaning rag onto the counter and stormed upstairs to find out what damage had been done this time.

She banged on the door for several minutes then jumped back in surprise when Talula answered. The gnome’s face and hair were covered in soot. Most alarming, however, were the goggles. They magnified her icy blue eyes to five times their normal size.

“No,” the innkeeper answered. “You’re making too much noise.”

“MAKING TOYS?” the gnome shouted back. “WELL, SOME FOLKS WOULD THINK SO, BUT YOU NEED TO BE CAREFUL WITH...”

Allison cut her off, her temper flaring. “Not toys, noise! Miss Talula, look what you’ve done to my room!”

Talula’s comically large eyes blinked a few times and she turned to survey her home. To her, everything was exactly where it should be. To Allison, the room was a disaster. Wrapping paper and festive ribbons were stacked to dangerous heights, piles of loot covered every horizontal surface, and the air smelled curiously of gunpower and cookies. The workbench was a sea of holiday colored tubes and various lengths of cannon fuse. A large machine chugged ominously in the corner, its sides white with frost.

“I’m afraid I’m going to have to ask you to leave.” Allison said.

“YOU’RE AFRAID OF LEAVES?” Talula yelled. “IS THAT WHY YOU LIVE IN THE CITY?”

The human just shook her head and handed a yellow piece of paper to the gnome.

“You can stay until after Winter Veil, but then you need to move out.” Allison said.

Talula's ears were still ringing from the last explosion. What had Allison said? She removed her goggles, expecting to read a Winter Veil greeting card. She was surprised to discover that it was an eviction notice. She frowned and looked around the room. It would take her until the end of the holiday to get everything packed, never mind finding a new place to live.

"No," she thought with conviction, "my Winter Veil plans cannot be stopped!" Laughing maniacally, she slid the goggles down over her eyes and went back to wrestling a small clockwork device into a box.

Days later, the gnome had barely left her room. She had sent a flower arrangement to Miss Kya and had done an installation for Lady Kennia and Master Tai but after each side trip she immediately went home to work on her projects. The gnome was nearing the end of her list and she checked it a second time to make sure she hadn't missed anything. There was one last task that needed to be finished before the Winter Veil party in Winterspring. She had to meet with Grakth.

She had worked with the troll on numerous occasions in the past. The witch doctor fancied herself something of a cook and they had worked out a system for circumventing the trade restrictions that gave them both a full cut of the profits without getting the goblins involved. Talula had set up the meeting and if all went smoothly, her gifts would arrive in the hands of her Horde family, safe and sound.

She hopped on a griffon headed for Westfall, then headed for the gloomy forest of Darkshire.

Darkshire always made Talula nervous. The air was filled with the scent of moist, rotting things. She shivered, waiting for any sign of her contact.

"Be ya cold, little gnome?"

The sudden voice made her jump and spin. Mocking cackles came from behind a large, creepy oak. Talula put her hand to the hilt of her dagger as a tall figure wearing a strange skull mask stepped out.

"Grakth! You nearly scared me to death! Why can't you ever just be waiting out in the open!" Talula let her guard down as the troll continued to chuckle.

"An' miss out on yer 'spretion? I no tink so. Beside, no get uppity wi' me, little gnome. Ya need ol' Grakth's help not da uder way 'roun."

"Yes," Talula said, taking the scolding in stride "quite right. Thank you for meeting me, ma'am. I have some Winter Veil gifts that need delivering. Can you do this? I have a new recipe for you as payment."

The troll pushed up her mask, her crafty eyes squinting the gnome. "An did ya remember Ol' Grakth dis Winta Veil time?"

Last year, Talula hadn't even known that the Horde celebrated Winter Veil but when she arrived without a present, Grakth had turned her into a snake. She wouldn't make the same mistake twice.

"Yes ma'am! I did" the gnome said quickly, as she pulled a small package out and handed it to the troll. It was wrapped in red and green and had little jingling bells. Grakth gently tossed it in her hand, as if weighing the gift, then she turned and looked at the sack of gifts for delivery. Her red eyes narrowed to slits. 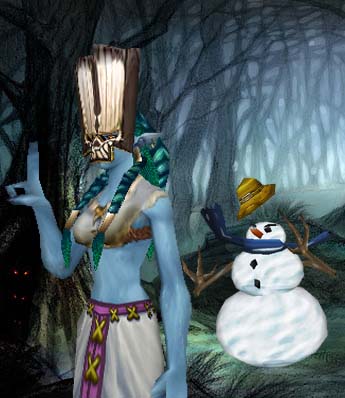 "I be tinkin dat ya got me carryin' all dese 'eavy presents and ya give me da smallest one. Stingy little gnome!" It seemed to matter little that the package contained highly sought after ghost mushrooms. "I tink yer 'eart be frozen - and so too should you be!"

The shaman said something sharp and gutteral and Talula felt the strange shivering sensation of magic sweap over her body. She tried to cry out, but there was no sound. Only a light sprinkle of snow came from her mouth when she tried to speak. She looked at her body and saw that she had become a snowman.

Grakth's amused cackle echoed throughout the web-covered forest and Talula frantically tried to get her little stick arms to pick up her precious gifts.

"Oh, now dun be frettin' little snowgnome," Grakth said between chuckles "I'll no be takin' yer gifts fer meself, though I should fer yer disrespect. Beside, I hear tell dat da Tong got big mojo. 'specially dat Nerrok. I 'ear he da type o' Orc dat it's better ta be on 'is good side."

Grakth picked up the red sack as little twig arms flailed wildly at her.

Talula tried to walk, but discovered that without legs, the best she could do was swish from side to side. "Perhaps I can pull myself along" she thought. Little twig fingers reached and stretched toward the ground, scratching frantically at the leaves, desperate to find purchase. "Just... a little... further..." but snowmen were not made for bending. Stick arms waved wildly as Talula over-extended and fell over.

She let out an exasperated sigh that turned into a flurry of snowflakes and frowned as they fell back onto her face. She waved her stick arms around somemore and then lay still, looking for all the world like some demented child's snowy rendition of a murder scene. 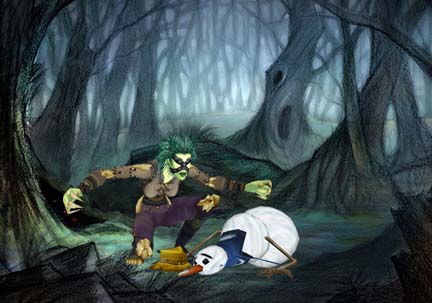 She had no idea how long she lay by the side of the road before the Forsaken woman found her. She heard the carefully placed footsteps and tried to twist toward the sound. Suddenly, a face loomed upside-down over the gnomes. Leather strips covered the undead woman's eyes and yet she moved as though she could see. Talula tried to speak, but only succeeded in spewing forth more snow. She heard the woman say something, but did not understand. It was low and gutteral; a language for those no longer capable of proper speach. The Forsaken giggled and shook the snow from her hair. She grabbed Talula's hat and sniffed at it curiously. "It's the end and I'm going to lose my lucky hat!" Talula thought with despair.

Suddenly, she heard her name. "Tal-ula?" The gnome took a closer look at the drawn face and realized that she had seen it before. Yes! She was Krelle, one of the women who were talking about gnome stew.

Krelle said something else and then reached into her bag and produced a small flask. She unscrewed the top and poured a stream of amber colored liquid onto the gnomes face where her mouth should have been. Talula felt the warmth rush through her body and soon, she was melting, the snow falling away like a sudden spring day. She found her arms and legs and face and hair and then she was herself again. She smiled over at Krelle who returned the gesture. Digging out her translator she said, "Thank you so much! I could have been there forever if not for you!" In her broken Tiger cant, the Forsaken replied. "You family. You better now. Go home. Get warm." The two exchanged smiles again and Krelle helped Talula to her feet.

"Will I see you in Winterspring for the party?" Talula asked. "I be there. You take more care." Krelle scolded. Talula bowed at her savior and asked "By the way, what magic was in the flask?"

Krelle grinned and said "No magic. Rum. Nerrok say it cure everything."

Retrieved from "https://earthenring.fandom.com/wiki/Gnomish_Story_For_Winter_Veil?oldid=3375"
Community content is available under CC-BY-SA unless otherwise noted.