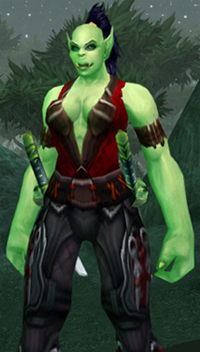 This olive skinned orc seems scrawnier than most females of the race, due to her short height, but she certainly does not lack in muscle. Her blue-black hair is kept in a tight traditional top knot and hangs just past her shoulders. Pale blue eyes are her most notable feature as they stand out against the olive tone of her skin. Through her nose hangs a gold ring which she often fiddles with when caught in a moment of deep thought.

Giska enjoys letting her mouth run and often has to be told to watch what she says and who she says it to. She has a good sense of humor, as long as the jokes aren't at her expense. She is, for the most part, a calm and collected individual. When given a job to do, she tends to throw herself head first into seeing it is completed, often ignoring all else.

Retrieved from "https://earthenring.fandom.com/wiki/Giska?oldid=33464"
Community content is available under CC-BY-SA unless otherwise noted.