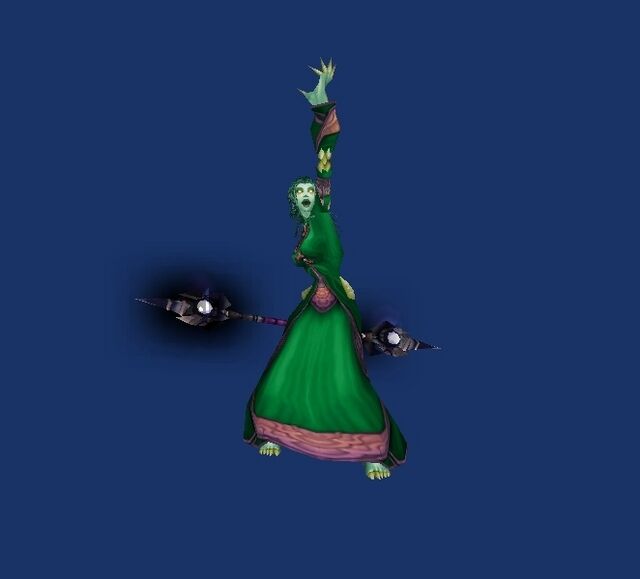 Eriyne was born Irene Cormier to a poor farmer and his wife on the outskirts of Brill. Irene had the fortune to be born very small, almost doll-like at a height of 4'11", and very, very pretty.

Her parents, seeing Irene's prettiness as a way to move upward in their fortunes, invested in some fetching dresses, and began making sure the local monied single men got sight of their daughter as she grew into young adulthood.

Irene caught the eye of a very wealthy farmer, who had an extensive manor that produced goods marketed all over the Kingdom of Lordaeron. At the age of 18, Irene married Henry Fields, and began managing the large prosperous farm while her husband spent much time in travel to sell the goods the manor produced.

Two sons, Thomas and Samuel, were born of the union. Irene and Henry had been married 10 happy years when the plague came. It was then that in an act of stunning cowardice Henry fled away from Brill instead of rescuing his family when he heard news of the disease heading toward the town. He justified to a friend, "I made one family, I can make another." Eriyne, Thomas and Samuel all perished of the plague.

If the Light was kind to Eriyne, her story would end here, but out of the mass grave she was buried in arose Irene. She spent 5 years as a mindless pawn of the Lich-King, murdering many helpless people, and wreaking great havok, before his grasp upon the masses of the Scourge weakened. When Sylvanus rebelled Irene joined in the ranks, and found herself freed of the Lich-King's shackles.

Renaming herself Eriyne, an ancient word meaning "Fury," Eriyne set out to find out what had happened to her family, and took up the study of demons.

Study came easily to Eriyne, and she progressed rapidly in her studies, seeming to grasp control of a new demon daily, and she grew quickly into her new career, but she was not so fortunate in familial matters. Eriyne found out that Henry fled the plague from a business associate of his who had also become Forsaken.

Forsaking her studies for a while Eriyne trekked all over the lands of Azeroth hunting her husband. Tasting failure, she placed a bounty upon Henry's head, and hung notice the bounty in Booty Bay. It was then that Eriyne met a group of assorted Hordelings called "The Grey Tiger Tong" who offered to find Henry for a price.

Eriyne eagerly agreed, and in a little time was rewarded with a letter in the mail stating that her husband would be brought to meet her at the Lighthouse in Westfall.

Eriyne eagerly rode out to the Lighthouse, and her husband was brought to her. With boiling rage she confronted him for letting his sons die, and sliced open his throat.

After the death of her husband, Eriyne went into mourning throwing herself into the study of the books written in blood on human skin that held the greatest knowledge of the nether. Slowly she began adventuring with a strong Jungle Troll by the name of Crul'jin.

In defiance of fate and race, the two fell deeply in love, and shared a summer of bliss adventuring together. However, a dark force had awoken in Eriyne, and eschewing her new love's company for a time, she sought out again her books, and the power that lay within.

When Eriyne saw Crul'jin again he had moved beyond the ending of their relationship and was courting anew, Eriyne's morale was crushed. She once again sought refuge in the smoke of lit candles and crabbed writing in Eredun.

What emerged from the smoky library was a twisted, power-hungry Warlock who reveled in pain and death, and sought above all to manipulate others into killing for her while she remained inviolate in reputation.

It was while she was in this state of being that she got into a heated argument with a warrior named Thweikantra, and hired another warlock named Razas Josephson to kill him. The bounty Razas asked for this deed was her heart, which he put into a jar. Razas has given her back the heart since but Eriyne refuses to touch it because she is afraid of the thing.

Eriyne was shocked back into her humanity with the discovery that her sons were not dead as she thought, but alive and in the service of the Lich-King. After casting around for any way other then death to save her sons, Eriyne was forced to kill them to return thier souls to the light.

Eriyne drifted for a time as her clan Storm Earth and Fire dramaticly fell apart. Seeking the warmth of other horde she turned to Kormok of the Tears of Draenor and spent a soggy evening under the Orgrimmar falls. The Eriyne who emerged from those falls was deeply touched by the ceremony and looked upon it as a baptism into a new life.

Krangloth and Eriyne began a close association when Krangloth, who knew of her crimes, trusted her with a book to free his gentle voidwalker Thogkresh if he should die. At that time, Krangloth was wrestling with possesion by a demon named Zinthris. In a ritual enacted in the summoning circle in Orgrimmar, Eriyne used her fel power to tempt Zinthris out of Krangloth's body but offering the demon her own body to inhabit. The demon fell for the trap and once Eriyne had Zinthris she used her startling power to force Zinthris into a blood caked book. In the process Zinthris' soul was ripped in half from being forced not only by Eriyne but also by some other malevolent force. Only half of Zinthris' soul was trapped in the book. Eriyne inscribed the book with a firey rune and regarded the ceremony as a failure.

She hunted down the other half of Zinthris who was being helped by Horace Haklon, a forsaken of weak powers and little will, to attempt to find the location of the book holding the other half of Zinthris' soul. Eriyne confronted Horace and convinced Horace to bargain with her. Horace agreed to hand over the book on the condition that Eriyne would kill him so he could be with his wife and children again. Using her wits Eriyne agreed to the deal and Zinthris' other half got imprisoned in her Imp, Azgup. Azgup is put out and argues with Zinthris constantly. Eriyne is searching for another book to house the second half of Zinthris' soul but has not found a strong enough recepticle yet.

After Eriyne imprisoned Zinthris she spoke at length with Horace about how he was feeling. After convincing Horace to turn himself over to the Argent Dawn for crimes he had commited against thier members she gave him back the life he had given her.

In the process of getting to know Krangloth, Eriyne once again fell in love and sees Krangloth as her savior. Eriyne and Krang are currently engaged but not without thier unique problems.

Eriyne is now good. She is brutally honest, and still plays mind games by asking uncomfortable difficult questions to the people who least wish to be challenged on issues.

The killing of Thweikantra has has ramifications in that a rogue named "Desaad" is after her death. Eriyne finds him distressing.

Eriyne's ex-husband Henry has become a member of the scourge though Arthas' influence. He seeks to hurt Eriyne and Krangloth as much as he can.

Zinthris has escaped and in revenge for ripping his soul in two, he in turn ripped Eriyne's soul in two and has smashed the half he has to smithereens. Due to this Eriyne has lost most of her memory.