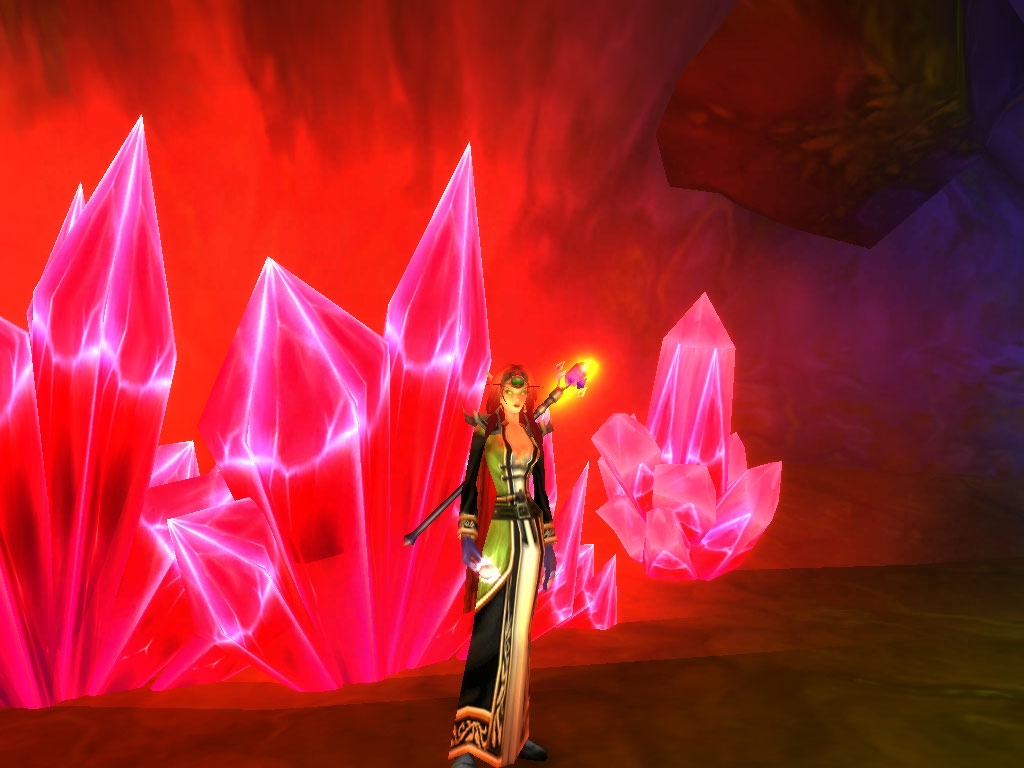 Elfaba is a striking redhead with golden streaks running thru her long hair. Her emerald green eyes that sparkle and penetrate captivate most that behold her. Her skin is fair and satin smooth to the touch. She has a small frame and delicate features, the pouty lips being rather indicative of her nature. She is considered an Elven Beauty by Blood Elf standards.

Elfaba is complex in personality. She can be fun and friendly or evil and lethal. Her humor is fun-loving, but can turn into wicked and cruel in an instant. Although she does not try to be a crowd pleaser, she does thrive on attention and adoration. She longs for love and wishes for it to happen, but it seems she cannot maintain it for long due to a cruel heartbreak in her past. She has overcome a lot of her problems, but still has lapses of sadness and depression about her life. Altogether, she is a unique personality and quite an interesting Elf!

Lady Elfaba Ixchelle Firestone was born unto the Highborne Elves Sir Wailand and the Lady Ixchelle Firestone. He was a Blood Knight of the Highborne Order and her mother was a Lady in the Court of Sylvannas. They had another daughter, Galadrielle, whom Elfaba raised when their parents perished in the Sunwell disaster and left the girls orphaned.

Elfaba was a young Mage when she met the love of her life, Vestorne, a handsome Rogue of considerable skill and wealth. They married, formed a guild and had a daughter, Arweyn and a son, Barienin. Vestorne became highly ranked and was called off to war, seldom coming home to his family. Word came to her of his infidelity with her sister, Galadrielle, and she was heartbroken, vowing never to trust another with her heart again. She left him and set out into the Realm on a sabatical to regain herself.

Elfaba wandered alone for many years and had many friends and loves, but never completely trusted them until she met a female mage troll by the name of Shakina. She became her friend and partner in mischief through the years. Shakina was always true to her as a friend and she gained Elfaba's respect and love. Shakina introduced her to Venico, another Mage, who taught her the ways of the Magi and she became highly skilled in her craft. Her respect and love of him made her realize that she could trust again. Due to her association with the two Mages and their constant love and attention to her needs, she eventually met the other members of the Tears of Draenor.

As she grew to know them, she realized that they offered her a place in their clan with no expectations other than to be true to the Horde, to the Tears and to herself. Another troll, Rahzu, became her good friend and after many animated discussions she finally made an oath committment to the Tears. Prior to her initiation, she met, fell in love with and secretly married Lanrillas, a Rogue in the Tears, and they had a child, Malelficent. Alas, Lanrillas sadly died not long after the birth of his only son. Although Elfaba again experienced heartbreak, she has her friends and is hopeful about her life.

Retrieved from "https://earthenring.fandom.com/wiki/Elfaba?oldid=31030"
Community content is available under CC-BY-SA unless otherwise noted.