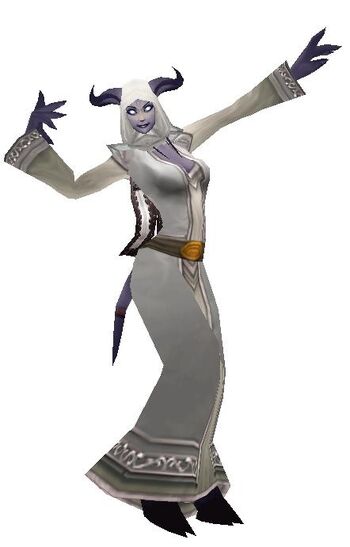 Strolling along the religious and healing spots of the Alliance cities, a passerby might become slightly startled at the tall, dark skinned creature before them. Standing quietly, with a smile on her face, Drogheda greets all with a warm welcome, even if the only response mustered is a shriek. Once you get past the hooves, gold-ring adorned tail and long, curved horns, it is easy to look upon this Draenei with ease.

Her ever-gentle pale blue, glowing eyes hold a caring, accepting soul. She carries herself with a graceful and delicate air, stepping lightly on the ground so as not to disturb what moves around her. This, of course, can be easily broken if she spots a good friend or acquaintance. Rushing towards them with open arms, she will embrace them with a hug and kisses on the cheeks, exclaiming how glad she is to see them, question them to their adventures, and tending to them like a mother to a visiting child.

The clothes she wears are of the finest quality and made with the utmost care, though perhaps a bit extravagant and bold to most. Either way, she wears them with pride. When asked, she will be more than happy to look-over what you have and mend what damage has been done or give you an offer on something she, herself, can make you. She may even throw in a complimentary snack if you are a bit hungry.

An honest Priestess, Drogheda posses all of the qualities that are a testament to the Draenei’s faith in the Light and the Naaru. She accepts all the races on Azeroth with a kind and loving heart, though not fully understanding them at times. Somewhat naïve, she listens intently to others giving them her undivided attention, showing an interest to help everyone she can in times of need. Doing her best to speak and comprehend Common, it still becomes a challenge, and perhaps entertainment for those around her as everything doesn’t come out as it should or she misinterprets the simplest of sayings.

Amongst her own people, friends, or those she cares about, her words turn into an unfaltering melody in her own language, and full of passion. Her quiet and polite demeanor change to a festive and affectionate one as she motherly attends to what those around her do say or want.

Still learning, and a young adult for a Draenei, Drogheda has begun venturing outside the confines of the Exodar alongside her younger sister. Acting as a representative for her people, she can be seen tending the wounded and visiting the Alliance’s spiritual leaders and healers, ever-searching for a way to get back to Shattrath City.

Born on the world of Draenor, when both Draenei and Orc lived in peace amongst each other, Drogheda was born to the large Nactolia family. Being one of the many young, she grew up amongst flourishing grasslands, open skies and the dwellings of a warm home built within the side of a cliff not far from Shattrath. Stories of the Eradar, and how they fled their home-world from the hands of the Legion, were told to her every night from her elders. It is unfortunate that she was unable to take in everything this new world had to offer and made to re-live a terror her family hoped was gone.

The Orcs, seduced by Kil’jaeden, began their merciless attacks on the Draenei as Drogheda entered her childhood. For eight years, her race played a game of cat-and-mouse with the Orcs. During this time, Drogheda was trained in the healing arts. She did her best to heal those around her, asking forgiveness from those deformed by the Orc’s Fel magic. Drogheda and her family took refuge in Shattrath but both she and her younger sister, Sibylla, were soon separated from her parents when many escaped with the Prophet Velen to the Exodar.

Upon the crash of the Exodar, Drogheda and her race wearily and cautiously entered Azeroth. Taking what was taught to her from the Aldor and her parents, Drogheda once again took to healing her people. As they rebuilt the Exodar into their new home, she continued to follow the ways of the Anchorites under the watchful eyes of her mentors.

Retrieved from "https://earthenring.fandom.com/wiki/Drogheda_Nactolia?oldid=23618"
Community content is available under CC-BY-SA unless otherwise noted.