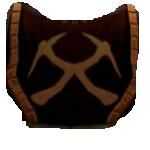 "You haven't truly lived 'til you've dug a big hole in the ground!" -Gari Bouldertoe

The Deep Mountain Mining Guild was founded over a century ago in the heart of Ironforge by Gari Bouldertoe and his brothers. The Bouldertoe brothers have worked tirelessly since it's founding to instruct new generations in the art of mining and smelting. They also work closely with the Explorers' League to help train and supply young adventurers.

In recent times, the guild has begun to recruit adventurers from every profession, race and walk of life.

The main branch of Deep Mountain Mining is located near the Great Forge in Ironforge. This branch is run and maintained by Geofram and Golnir Bouldertoe, who train and supply aspiring miners.

Gari Bouldertoe has recently aquired offices in the Dwarven District of Stormwind City, as well. This branch is run and maintained by Gelman Stonehand and Brooke Stonebraid.

Just recently, Deep Mountain Mining has opened recruitment to anyone willing to join. Gari Bouldertoe, not content to "sit around on his duff" has recently set out into the world seeking adventure and fortune. Gari Bouldertoe is a prominent and distinguished member of the Excursion Council, and has earned the title of Consul. He takes pride in his duties as an ambassador, and quickly makes friends in every land in which he ventures.

Those interested in joining the Deep Mountain Mining family, need only seek him out.

Retrieved from "https://earthenring.fandom.com/wiki/Deep_Mountain_Mining?oldid=28263"
Community content is available under CC-BY-SA unless otherwise noted.