Bucksan carries this journal with him at all times. He records tales of his adventures, quests, meetings and discoveries on its pages.

"When confusion clouds an already overburdened mind, revenge is often what comes up."

Today I awoke from my pod. A year I’ve been trapped. My best friend Ranvahl and the sweet innocent Tamani are nowhere to be found. My mother has been left behind as the horde of Fel Orcs ravaged Lower City.

The Naaru and the Light have abandoned us. We are but a little flicker of nothing, unable to stand our ground when the enemy comes. BUT NO MORE! I will rise up, be born again and reach the Exodar! There, Velen the omnipotent will guide me on my path. He will tell me what I have to do to make things right.

Firmanvaar, at the crash site, told me of Nobundo, a Broken that spoke to the Wind and stands besides Velen as an equal. What happened to our fellow Exiled in Shattrath cannot be forgotten. We CANNOT and WILL NOT shove them aside like vulgar beggars. Every Broken walking Azeroth and what remains of Draenor was once a proud Draenei. Should my mother be still alive, she is probably one of them!

I must reach the Exodar and speak to Velen and Nobundo. Only they can help me make sense of this…of this downfall of our once proud civilization.

Oh how I wish I was born during the Argus days…

"None should be as selfish as believing he is right."

Before reaching the Exodar, Velen and Nobundo, I crossed path with other survivors struggling just to get by. It's been a pleasure to meet them. I've also encountered many different species inhabiting this planet. The Blood Elves hitchhiked aboard our ship and are still seeking to kill my kind for some reason. Further investigation will be needed. The Naga are a filthy bunch... they stink AND they seem out for blood. I even saw a murloc. Quite peculiar these creatures...

I also crossed paths with Humans, Dwarves, Gnomes and Night Elves. Of all these, I seem to get along well with the dwarf. He reminds me of my grandfather. My grandfather was one of the top Miner among us, and seeing this small but sturdy being with a pickaxe and a smile on his face has brought back some fond memories.

Speaking of which, I've seen plenty of minerals lying around the surface of this island. Perhaps I should take that ole' pickaxe myself and give it a try...the dwarves might have uses for the ore.

I reached the Exodar for the first time today. It has been quite a journey so far, but I know it is only beginning.

I spoke to the Prophet Velen. He told me what I had already experienced on Azuremyst Ilse: Victory against Kil'Jaedan and the Burning Legion will be acheived through alliance with the other races of this world. I will thus extend open arms to Dwarves, Night Elves, Gnomes and Humans alike, for they hold the key to claiming back my land!

Having been born in Telaar, I cannot help but to long for the day when I'll come back to Draenor. But that is not my only goal. I also spoke with Farseer Nobundo and was left speechless. This man understands everything about our current struggle. I admire him, of that there is no doubt. Surely, I will adhere to his ideas and values. We must help the Broken, for they are part of us! Not fiends, not foes, but some of the few proud and righteous eredars left in the whole Twisting Nether, fighting for the same good cause that we do.

If there is one goal I must reach, beyond claiming back Draenor and Argus, it's to unite the Draenei. Not under the Light, or the Wind, or the Alliance, but as one proud race, standing tallest among all!

PS: Oh, and I was right. Much people from around Azeroth have need for the minerals I find through my travels. 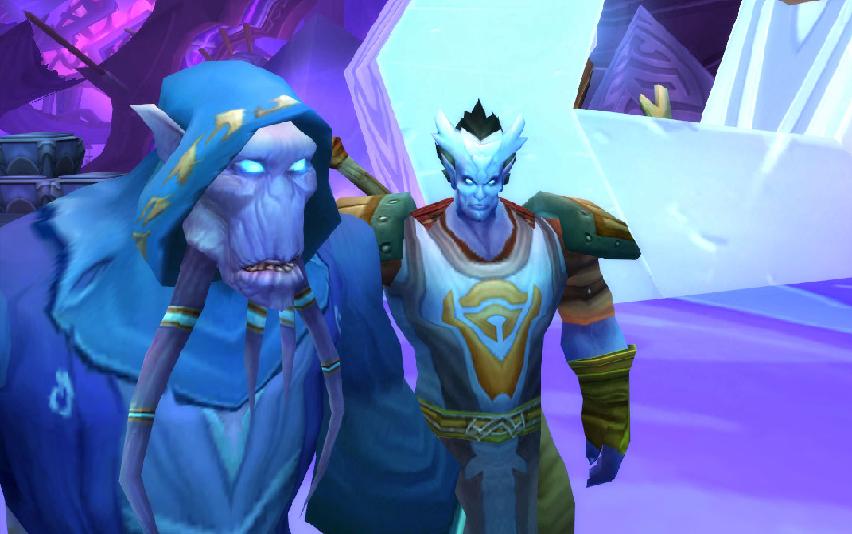 "Fondness of past memories should never hinder moving forward."

As I slept in the Crystal Hall of the Exodar tonight, I remembered my mother. Instead of mourning her, I decided to honor her by picking up where she left. Some pieces of garment I have found so far seem fit to be transformed into dusts and shards. I will see what comes up from this, but I could start the craft of Enchanting myself...

Today I helped one species wage battle against some of their kin. I wasn't adamant about the idea, but seeing what the latter had done to the former, I could not help but to draw a parallel between the furbolg and my kind. Every story derserves it's proud and memorable ending. In helping the furbolg I appear to have become their champion, hero or prophet. Maybe all three. I find it amusing. Hopefully one day I will do the same deeds for the Draenei and walk out as a hero there, too.

"Unity is not a state of mind. It's a perpetual act."

As I ventured north of the Exodar, to the Bloodmyst Ilse, I realized the vileness of the Blood Elves. They truly seek power and potency at the expense of everything else, including Nature and their own code of conduct. They torture my kind without pity. It amuses them, even. I tend to feel merciless whenever I smash my hammer against one of their precious little twig-like body. Seeing them snap in half brings me a joy I am afraid to to fully grasp. I seem to like revenge, and revenge can only cloud the mind over time. I shall work on my temper later; right now the Blood Elves are trying to invade the Exodar and I have to help stop them!

I've found friends to help me with my cause. Kjartan the Lorekeeper, Fhey the Demon Huntress and Marelii the Blind Prophet welcomed me with open arms in their guild, The Fenians. They provide me with help, support and information about diverse topics. It makes the journey that much more interesting.

Following Fhey's idea, I ventured out of the Ilses to the Eastern Kingdoms, where the Humans have some petty squabbles among themselves. I helped them sort it all out by raiding the Defias' hideout, in the Deadmines. I hope this will help stabilize the frivolous political climate of Stormwind, which is otherwise a magnificient city. I even stole a foul Tauren's Warhammer and currently wield it against the Blood Elves near the Exodar.

"The biggest form of humiliation is realizing you are not unique."

A short time ago, Fhey the Demon Huntress gave me a initiation quest to join the ranks of The Fenians as a Shadowseeker, under her command. The dragonhawks are flying creatures tamed by the Elves to help them fight. They are also magnificiant creatures, and a sign of pride. I was to steal one of the Dragonhawks, tame it and use it myself. This was to be the ultimate humiliation for the Blood Elves.

What happened was not as planned, but successful nonetheless. As I was spying on Sironas, north of the Vector Coil in Amberweb Pass, I accidentally ran into a Blood Elf outpost. Four Blood Elves were guarding what appeared to be a hatchery. As soon as they saw me they smiled and drew their swords. I fought them hard and fought them well, until the last one's blood reached the ground at my feet. As I bandaged I looked around me. Much of the eggs had been destroyed in the fight. Four eggs seemed to have remained intact. Three were red and one was of silvery colour. Curious, I took the Silver Egg along with me and put it on hay, behind the Blood Watch Inn.

For three days I took care of the egg, hoping it would hatch. During these times I kept on penetrating the Elves defenses and at one point, slayed a Sunhawk Researcher. On him he had what looked like a record of experiments. I took the text to the Blood Watch to show it to the translator there. Most of the text was either incomprehensible or useless. However, this passage seemed to pertain to the egg I had found:

"The dragonhawks are dying here on Azeroth. It has to be the air, as every other possible variable is the same on Azeroth and the Outland. If we are to conquer the Exodar here, we must have proud dragonhawks at our side to help win the fight.
I have engineered a new kind of dragonhawks. They should be much more tolerant to the conditions here on Azeroth. None of them have hatched yet, but I can already see that the manipulations I did on them will scar them in other ways. The eggs I toyed with are now of silvery colour."

As I turned the last page of the translation, I heard a crackling sound behind the inn. Sure enough, at that very time, the egg hatched and a little baby dragonhawk hatchling came out! The little being looked at me and hugged me as soon at it could. I must admit I felt pretty warm inside. 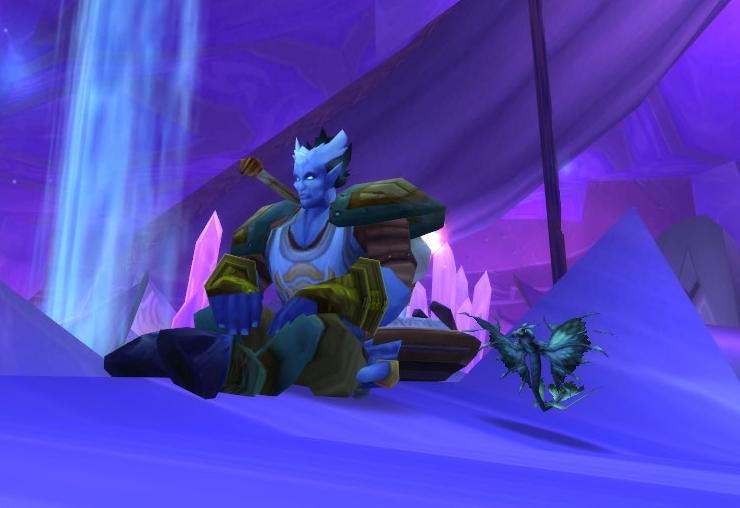 I finished cleansing the Bloodmyst Ilse today. I shut down the Sun Gate, killed much of the remaining Blood Elves and even decapitated their leader, the corrupted man'ari eredar Sironas. So many enemies to face. In front of the Blood Elves, the Fel Orcs, the Horde and all kinds of hostile tribes like the Naga, I cannot help but feel my legs grow weary and tempted to rest.

But I face those challenges not alone. I have my friends within The Fenians, including Ominojaku, Courtesy, Yurlan and Reszenzo to support me. I also have the Alliance on which I can rely. It gives me strength to face what appear to be the most daunting task I've seen yet.

Reaching Draenor. Getting revenge on the Fel Orcs. Keeping the Blood Elves in check. Looking for my homwtown of Telaar. Uniting the Draenei and the Broken. Honoring the Alliance. So much to do...

For now I will go lend a hand to the Night Elves, who supported the Blood Watch with troops when it was most needed. I travelled by boat to Auberdine and am already solving much latent problems they have been facing for too long. With those problems out of the way, I hope they and I can one day focus our attention on the real problems. I also hope that my deeds will not be forgotten and that I will, in turn, have their support when I need it the most.

Concerning the hatchling, it's now able to fly. While it doesn't participate in battle, it follows me like I am his father. He's still small, like a child. I doubt that he will get much bigger...

Now the only thing left to do is name it.

Retrieved from "https://earthenring.fandom.com/wiki/Bucksan%27s_Journal?oldid=23741"
Community content is available under CC-BY-SA unless otherwise noted.