This page is a candidate for deletion.

If you disagree with its deletion, please explain why at Category talk:Candidates for deletion or improve the page and remove the {{delete}} tag.

Remember to check what links here and the the page history before deleting. 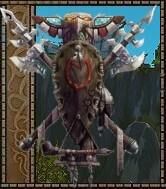 The Broken Horn Warband is a Family-Raid style guild located on the Earthern Ring Server (Horde) that actively promotes RolePlaying within the World of Azeroth. Created by several close friends in Canada, the Broken Horn Warband (BHW for short) has dwindled over time, but it's members are still active roleplayers and the guild maintains contacts in several other guilds. The guild is known for its sense of fun, family and friendliness that is beyond all comprehension. The guild leadership is mainly comprised of Taurens with officers from each of the other races as the point of contact for that race. Warsquaw Hapa is the current guild leader.

Originally, the Elders of the BHW were taken in by Harsk of the Thunderhorn Warparty. Although they learnt much under the Elders of the Thunderhorn, Hondo craved leadership and broke off to form his own band - the Broken Horn. Taking with him his trusted friends, Kahrn, Benek and Kurga, and his mate Hapa, they began what is now one of the longest surviving guilds on Earthern Ring.

Following the death of Hondo, Hapa assumed command of the warband, and has done her best through trying times to keep the sense of family that was always an integral part of this guild. Through the shifting leadership and many trying times, the guild has gone from being a small family living on the Bluff, to a large warparty of raiders, defending the Horde from its enemies, back to being a small family once again as many of the younger, strong-armed warriors left the comfort of the Rises to go and bring the battle to the demons of Draenor.

Retrieved from "https://earthenring.fandom.com/wiki/Broken_Horn_Warband?oldid=35768"
Community content is available under CC-BY-SA unless otherwise noted.