Nerrok silently watched the blonde-haired Forsaken toil away at the forge, preparing what needed to be prepared and warming the coals. It was damn hot in Slaede's forge; both of them had to strip their armor off in the sweltering heat, leaving them in their shirts and pants.

The undead was an old war buddy of Nerrok's. They'd served on various missions together during the time Nerrok spent in the Horde's military and had become quite close over the course of their deployments. A memory that never ceased to bring a grin and a quiet chuckle to the orc hunter's lips was when he'd loaded the plate-clad, mace-wielding warrior into a catapult (after much heated debate) and launched him over the wall of a Burning Legion stronghold simply because there was no other way to infilitrate the keep. After making his "landing" the warrior hadn't let his General down as he unlocked the keep from the inside - after of course wading through a platoon's worth of demons, covered from head to toe in a combination of blood, skull and brain fragments, grinning ear to ear behind his helmet. All in all, in Nerrok's eyes, Slaede was a solid man to bet on.

They'd maintained their relationship after they had both retired even though their paths branched off in entirely different ways: Nerrok seeking work with The Grey Tiger Shipping and Freight Company while Slaede defaulted to his love of crafting instruments of death and destruction from steel and stone, working out of Orgrimmar. He'd also affiliated himself with The Broken Horn Warband, an organization that many Tong'ers were familiar with. This relationship was mutually beneficial; if Nerrok needed someone on the outside to lend a helping hand, Slaede was his go-to guy. The exchange, of course, was that many fine-quality maces, daggers, swords and various other weapons crafted with the Undead's insiginia found their way to The Slow Blade, where they were quickly expidited and profits reaped.

It was after Slaede discovered an intriguing recipe to craft a pair of mysterious blades that he'd written his old orc colleague, letting him know that he might be interested. After seeing the schematics Nerrok was definitley curious to see what these weapons were capable of if placed in hands that knew what to do with them. He had just the person in mind.

It had taken months of time and hundreds of gold from his own personal finances for Nerrok to gather the materials necessary to allow his friend to craft the blades, delving through dungeons, slaying horrific monsters and scouring exotic locales. And now he stood nearby, arms folded over his muscle-rippled chest, watching as Slaede worked his magic.

Two days of solid work later, neither one of them had slept. Slaede worked dilligently over the forge, casting the molds for the blades out of enchanted eternium and fashioning the handles from pristine Gronn bone. The bones were wrapped tightly in Netherdragon flesh, the scales still firmly attached, providing a superior platform for the wielder to grip as well as a foil to contain the immense amount of multipe magical energies the steel would contain. Felsteel, Khorium and a veritable wizard's cupboard of enchanting materials, ranging from the mundane to the exotic to the near-priceless, were all melted down and thrown into the mixture as well.

Slaede looked up from the molten metal as it bubbled before him, then walked over to his workbench to take another look at the time-stained scroll which contained the recipe for the weapons. He eyed it curiously for a moment before speaking to his friend. "There's one more component missing."

Nerrok raised a solitary eyebrow. He'd gathered everything he'd been told to, to the best of his knowledge. "Oh yeah? What?"

Slaede narrowed his eyes as he looked over the recipe again. "According to this parchment, the blades thirst for the blood of one close to the wielder's heart. They will not be satisfied until they have been quenched."

Nerrok's expression remained placid as he mulled this news over. At length he spoke again. "...How much blood?"

A few hours later the expert blacksmith had fashioned a funneling device made out of dark iron ore, setting it up over the forge and the still-molten metal. A large basin supported by four outspread legs rested at the top, the bottom draining into a thick, heat-resistant tube that split in the middle, and fed directly onto the two casts where the unborn blades smoldered.

Slaede watched with a slight smirk pulling at his features, sweat gleaming from his brow. Nerrok approached the forge, having shed his own shirt on account of the heat and dripping with sweat himself, drawing his oversized hunting knife from its sheath along his thigh. He outstretched his arm over the basin, flexing his massive forearm repeatedly to stimulate bloodflow and locate by visual confirmation a vein beefy enough to suffice.

"Call one of your druid friends in The 'Horn. I have a feeling I'm gonna need a pick-me-up after this is all said and done."

With that, the orc slid the razor-sharp blade over his own flesh, continuing to flex and relax his forearm as a steady stream of blood flowed from the long wound. He watched it trickle steadily into the basin to be funneled downward until the deep crimson fluid spilled into the liquid metal below. The blood hissed as it was absorbed, the molten materials slowly changing hues and beginning to stir and bubble with more fervor.

He watched for as long as he could, until his vision faded and darkness overcame him.

Nerrok could make out Slaede's voice through the haze of semi-consciousness, though he didn't open his eyes...More than likely because the strength to do so hadn't returned to him yet.

"Hapa and Loamdreg are patching you up, Ner. I think you got close to 4 pints before you dropped, crazy bastard. Wanted to make sure it worked, eh?"

"Anyways, rest up. I put the inscriptions on the blades like you had asked. They're...A piece of work, if I do say so myself.

In fine, flowing script, so small that it was barely noticable, words were etched into the blades of both the daggers, the pristine-white steel surging with immense energy. The words read as follows.

Krelle smiled as she arrived, moving to crouch behind a large boulder with Nerrok. He'd asked her to come up to the Gordunni Ogres' outpost - she assumed it was for the perpetual bounty on them. "Evenin', Ner," she answered quietly. "What's up?"

"Got somethin' for ya," he said casually, offering her twin daggers.

Krelle took them curiously, turning the scabbards over in her hands. They were beautifully made - it must have taken a master smith a great deal of effort. Curious as to what the blades would look like, she closed her hand around a hilt. She paused, her eyes going wide behind her mask. She could actually feel the magic in them - it felt warm and welcoming. She pulled a blade free, the pale steel a ghostly grey in the shadows. There were faint etchings along the blade, which she guessed to be magic runes. The edge was razor-fine, the balance perfect. Where has this blade been all my life? she wondered.

"Give 'em a shot. See how they feel," Nerrok suggested quietly.

Krelle strapped them on to her belt and slipped into the shadows, grinning like a kid with a new toy.

"Not bad," Nerrok grunted as he and Voodoo came down to join her. "How do they feel?"

Krelle looked down at the daggers, glowing softly in the eerie night-glow of Terrokar. "They feel like they were made for m-" she paused as her gaze caught a word among the "runes" on the blade. It was her name.

Nerrok casually stroked Voodoo's head as he watched her reaction with a small smile. Krelle carefully cleaned the blade and inspected it more closely. Out of the shadows, she could now clearly read the inscription.

She spun on Nerrok, took two steps and leapt at him, flying into a hug around his neck. The big orc chuckled as he returned the hug. "Hope ya like em."

She gave him a last tight squeeze before letting go and dropping back to the ground. "I love 'em," she exclaimed. "I - Thanks," she added, unable to find the words to properly express her feelings.

Nerrok nodded casually. "Good. From what you told me about that cult that has it out for us, you're gonna be getting plenty of chances to use 'em."

Krelle grinned wickedly at him. "Always a use for a good blade," she answered, going back to her inspection of the knives. They were gorgeous.

"Any plans for the rest of the night?" he asked suggestively, nudging the dead ogre with a mailed boot.

"Good deal. Tell me if they get to feeling wierd - there's a lot of mojo in those things."

Krelle shook her head quickly. "No, they feel great. It's like... they're already warm, y'know?" It was hard to explain. Krelle didn't know much about magic but she would have sworn that the blades were somehow making her strikes more devastating, guiding each blow just the fraction of a degree it needed to yield maximum damage. "Fel," she murmured, rubbing her thumbs along the netherdragonhide hilts. The hilts felt good in her hands. Like they belonged there.

Nerrok chuckled, pleased with her reaction. He reloaded his crossbow and they went off to find more unsuspecting ogres to kill. 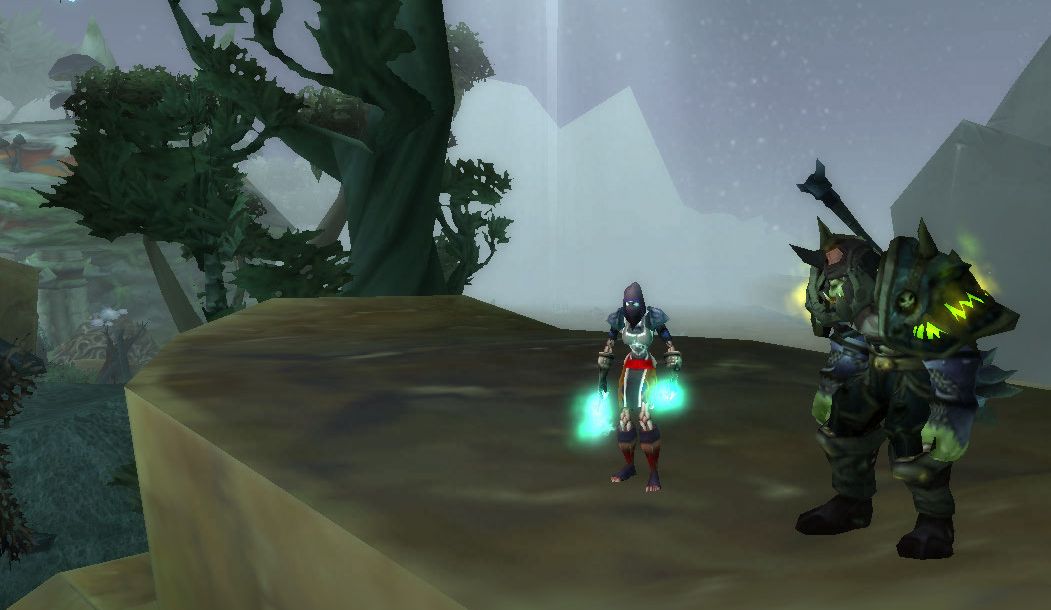 Retrieved from "https://earthenring.fandom.com/wiki/Blood_Ties?oldid=25225"
Community content is available under CC-BY-SA unless otherwise noted.