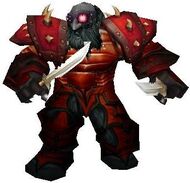 Long ago, before the High King passed away, Beln took the liberty to run away into unknown lands before the three clans began to clash. Not knowing where to go to escape the fear of dying or being forcefully enlisted into his brethren ranks, Beln took this as an opportunity to learn how to survive in the wilderness.

Luckily for him, he knew how to fish. Or, rather, he figured out how to fish in a few simple steps. Get a line, a stick, some bait, tie the line on the stick, then tie the bait on the other side and go crazy. While his way of fishing was not as efficient as many other fishermen out there his method worked nonetheless. His new-found skill gave him the ability to survive through fried fish.

For years he wandered about Azeroth, finding nice fishing spots and staying there until either armies came by and clashed or he felt he needed to move once more. Through the war he discovered a new ability within himself: hiding and silently moving around without notice. With this ability Beln was able to covet and smuggle things from the three clans without being noticed.

Beln continued to live in isolation without any communication with the other clans. When he caught word of the Dark Irons being enslaved by Ragnaros, he was overjoyed. With his brethren out of the picture, he could travel around without the fear of being hunted down ruthlessly... at least by his clan, anyways.

While he could not seek out the other two clans for shelter, he was able to travel more efficiently when the Thandol Span was constructed. This was a blessing since Beln didn't like the water, and used it almost every day to trade fish for supplies. Since people were skeptical or even hostile to Dark Irons, Beln always wore stuffy clothing so his skin wouldn't be exposed.

In the First War, he fished. In the Second War, he did something other than fish and actually assisted Berlshenk in retaking Khaz Modan. How it all started is a whole mess of chaos and confusion, however.

While finding a place to hideout from the armies of Azeroth, Beln stumbled across three Dwarves nestled near the Thandol Span, spying on the status of Dun Modr and the increasing Horde threat. The Dwarves discovered Beln, attacked him, then tied him up to be dealt with later. Unfortunately, in that timespan, the three Dwarves discovered that the armies were mobilizing and had to immediately report back to their commanding officers about the movement.

The three spying Dwarves were Berlshenk, Barzik, and Mardia. While Barzik and Mardia left the Dark Iron to die, Berlshenk couldn't help but to bring him along even though he would face more dire consequences from his allies. The four made haste to Stromgarde and alerted the armies to ready themselves. At this point, Beln was given two options: Rot and die in a cell regardless of his neutrality and allegiance or join the Mountainguard. From this point it's obvious what choice he chose. 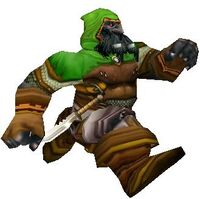 Joined with Berlshenk's platoon, Beln was a very valuable asset in the retaking of Khaz Modan. Able to sprint about and silently approach enemies from all directions, his kill count in the platoon skyrocketed despite his recent joining. While horrible with large weapons, his ability with daggers is top-notch due to the fact that he needed to cut his fish in order to eat them.

From the point of his ironic enlistment to beyond the Third War, Beln continued to be a great soldier and companion of Berlshenk. Even though Beln had a rough start due to his ethnicity, he was able to climb up the ranks of the Mountainguard and achieve captain status in Berlshenk's platoon.

After the Third War, Beln discovered an army of Dark Irons coming into the Wetlands. Dun Modr was weak, and Beln could only think of one thing to do: destroy the bridge. A good rogue and fisherman, Beln was also, and unfortunately, a good engineer, mechanic, and explosives expert.

Before the Dark Irons reached the bridge, Beln had set up thousands of large seaforium charges under the bridge. When the army was on the bridge, Beln impulsively detonated all the charges and utterly collapsed the bridge. He made a horrific sacrifice in destroying the bridge, but saved time for Dun Modr... for a few hours. Another few platoons of Dark Irons traversed the other bridge, looking for Beln. Within moments, he was sprinting to Dun Modr to alert all the people there to evacuate.

Beln and the Thandol Span had a life together. While Beln did hesitate to destroy the bridge, he had to in order to buy time. Even though Dun Modr was eventually taken, he was able to save the people from death or imprisonment by alerting Dun Modr with the explosions of the charges and his personal word. Despite the radical thinking, Beln was commended for his services.

Before Berlshenk disappeared, he was given the order to watch him at all times in case something arose. When Berlshenk was kidnapped, Beln was there to see him get hauled off by two large and unknown people cloaked in black. For his services and vigilance in keeping the Mountaineer Commander's whereabouts checked, Beln was promoted to Sergeant. When Berlshenk disappeared, he was eventually promoted to Mountaineer Commander.

The promotions, however, weren't enough to ease Beln. As a token of gratitude, he vowed to never drink again until he found Berlshenk. Regardless, Beln wasn't much of a heavy drinker due to his lack of ale during his isolation. To this day, Beln continues to seek information about Berlshenk, spying on cults or organizations that may have been affiliated with bad or skeptical histories.

Then, a month or so after the news of Berlshenk's kidnapping, Beln discovered that the dwarf was actually alive and well. The two met in the wilderness and had a good chat, and Beln was able to officially become the Mountaineer Commander. With much power at his disposal, he continued to rid Azeroth of scum and villany.

Obviously, the Dwarf is a Dark Iron, and his skin tone and eyes are no different from the others. He seems to bear few scars, and looks a bit less strong than other Dwarves. His friendliness shows through his wizened face and caring smile

He has a long ponytail that stretches down his back, and a short beard that looks properly groomed. Sometimes, he has goggles tightly strapped over his eyes, but his Dark Iron heritage shows through them as little blurs of red. If passing by him, he doesn't seem to make the sound of footsteps at all.

Retrieved from "https://earthenring.fandom.com/wiki/Beln_Brogglesmecker?oldid=31815"
Community content is available under CC-BY-SA unless otherwise noted.