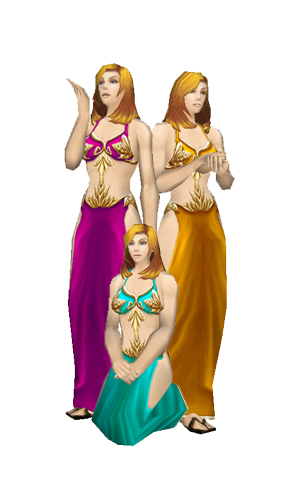 Bellatris was born in the year 600; she's 20 years old. When you look at her, you figure she must be at least 24. The gowns, the makeup and the jewelery all make her look older. When she speaks, however, she has a quiet, high-pitched voice of a 15-year old girl.

If you come close to her, you sense a sweet floral scent, reminding you (if applicable) of the Hinterlands in the far north. The scent may even daze you a little if you're not especially immune to these things. You feel warm and happy when standing near this pretty young girl, and perhaps want to stay in her presence a bit more.

Bellatris is a blueblood. This is quite obvious when you lay your eyes on her. Out of the endless piles of gowns and jewelery she possesses and changes on a daily basis, there is only one thing constant: her thin silver necklace with a tiny sapphire pendant in the shape of a heart.

Bellatris was born in the ruined City of Stormwind to Lord Qaros de Chalons of Stormwind and Lady Cynthia of the House Montague of Lordaeron. After her birth, her father accepts a job as a diplomat in the dwarven city of Ironforge to escape the unhealthy environment of a rebuilding Stormwind.

Thirteen years later, in the chaotic 613, Cynthia de Chalons dies mysteriously. Bellatris's father buries himself in his work, and not a year later, sends his 14-year old daughter alone to Stormwind with a few servants, where she inhabits a lavish mansion in the Trade District. She then buys another residence in Stormwind's Cathedral District to escape her father's control, and years later, gives her Trade District house away to the enigmatic Creel who moves in there with his adopted daughter Maisira.

Bellatris starts associating with the mysterious Soothsayer Veras Winvale, whom she meets under traumatic circumstances, and her interest in fel magic starts evolving. Despite her great ambition, however, Bellatris does not succeed in becoming anything more than a mediocre practitioner of the dark arts. Instead, she dedicates herself to studying the nature of the human psyche, and delves into the obscure magic of mind control.

Although used to the luxuries of this world, Bellatris seems to want even more. She is often described as insatiable; she allows her hedonism free reign, throwing lavish parties, consuming exotic opiates, fine food and wine, and handsome men.

Bellatris can often be seen in the presence of shady types such as the Soothsayer Veras Winvale or the elusive woman, Meris.

The nature of her connection to the two, however, remains in the domain of rumor.

Bellatris has been out of sight for more than a year now. Most seem to believe she is staying at her family's manor in Hillsbrad. Not a few days ago, however, a cloaked figure followed by two handmaidens made her way to the Chalons residence in the Cathedral District in Stormwind. Is the Lady back, and what could be the purpose of her return? (...)

There is nothing I want, Baydon darling. Nothing except perfection.

Insane? You call me insane? If a freedom from inhibition has no other name, then by all means, wrap me in a white jacket and ship me to the Stocks.

The only thing you should be ready to die for is yourself. And if there's one thing you really don't want for yourself, it's death.

Retrieved from "https://earthenring.fandom.com/wiki/Bellatris_de_Chalons?oldid=27117"
Community content is available under CC-BY-SA unless otherwise noted.