Bayul is ancient, and it shows. His fur is a dull gray, with large patches of white on his muzzle and chest. His horns are worn and cracked, with one almost completely broken off. He stands hunched over, the weight of many years bearing down on him.

His eyes are colorless and faded. Regardless, he never seems to struggle with his focus. When speaking to someone, he faces them (though he seems to be staring through them). When focusing on moving objects, he seems to lock on to his target. His precision and reactions are so sharp and fluid, it's as if he has a sixth sense.

When Bayul walks, he leans heavily on a gnarled staff which appears to be as old as he is. Although he moves slowly, there seems to be no lack of vigor. He never seems to tire, and when called to action, can be surprisingly swift and powerful in his movements.

Most noticeably, Bayul wears a large emerald around his neck. The emerald pulses and changes hues, and some have even claimed to see it change shape. 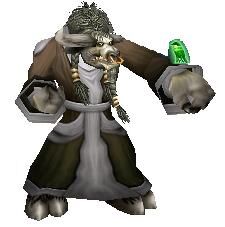 Bayul is always eager to meet new people and hear what they have to say. Although Bayul has the ability to sense the subtle, emotional energy given off by any living being, he always keeps himself in check, never passing judgment until he's sure of their intent.

Bayul is easy to approach and is always eager to help. He greets everyone with the same, warm smile, even those that would do him harm. His smile puts friends at ease and throws his enemies off guard.

Though he is slow to anger, he will not hesitate to use force on those that would cause harm to himself or innocent bystanders.

Due to his age, both ally and enemy alike underestimate his true power and potential. Bayul keeps few secrets, and is always willing to answer questions. Still, very few know of his ancient past or current agenda.

Bayul is once again out in the world, and doing his best to adjust to all the changes. His advanced age and seemingly extreme near-sightedness have made it difficult for him to travel and make his way around in a timely fashion. Bayul is also notorious for relying on the help of strangers, and will never refuse an escort or company. He is also fond of storytelling, and has made it his duty to hear and remember the lore of the various races, as well as help spread the culture, teachings and folklore of the Tauren.

With the recent events in Northrend, Bayul has set off on his own. His current location is unknown. With the recent discovery of the Taunka, one can assume he is busy collecting long lost tales and histories. 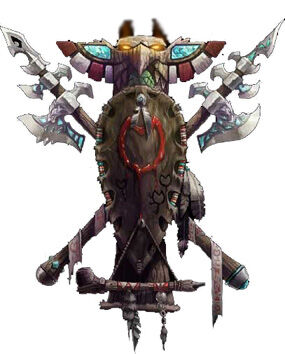