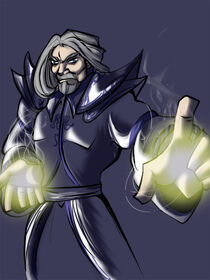 Little is known about Asherrean's history, questions about it often being met with cryptic and exceptionally vague answers. What little is known about his past centers around a branch of the Silver Hand known as the Dawn Legion, and service as a soldier during the wars. There is similarly little information remaining about the Dawn Legion, the only entry remaining in the archives a record filed under the name Isillien containing the words 'heretics' and 'excommunication'.

In late 619, Asherrean returned to Stormwind. He was often seen in the company of the enigmatic Shame and Bonnyjune. Not long after, Shame disappeared, and Asherrean retreated to his studies. He would appear in the darker parts of Azeroth from time to time to retrieve some obscure bit of information before vanishing again from the public eye. Sometime during this research, something happened. His research frantic pace halted, and his demeanor changed. He again returned to Stormwind, however instead of interacting, was content to observe events as they transpired. Shortly after this, Shame returned. The changes this wrought in both of them would lead to their eventual parting of ways.

More recently, Asherrean has been seen spending more time in Booty Bay and Redridge rather then Stormwind. His appearances in the city have been infrequent and often in the company of the Kaldorei known as PeeJee. For the most part he is still content to watch the game that is played out by the more dynamic residents of Stormwind, he is more prone to tip his hand then before.

In mid 619, Asherrean founded a small company dealing with the buying and selling of magical reagents. Information regarding the company is readily available due to its public listing in Ironforge. For over a year, at any given time dozens of items would be found listed at various auction houses under the company name. Over the past year, the company has done quite well, taking in a massive sum of money. However the only way noticeable way this excess funding has manifested for the owner is that his horse now wears barding of the highest quality.

Other known employees include a gnomish accountant who goes by the obvious alias 'Boudreaux Sauvage', and a Kaldorei that refers to himself simply as Erroch. Formerly, a tailor known as Ergo was on the payroll. Eventually a 'conflict of interest' rose between him, Asherrean, and Shame which lead to his eventual release from employ. Asherrean has also mentioned another group of Kaldorei in its employee he refers to simply as 'his trackers'. Even though he speaks of them with pride and admiration, the purpose they serve in the production of reagents, is vague at best.

Earlier this year, for some undisclosed reason, the company’s supply of high end reagents ceased overnight, only to pick up two months later as if nothing had happened. This coincides strangely with rumors of a house in Redridge that the commoners are now weary to approach.