An oddity among the Sindorei, the Lady of Evenweave Manor shows very little sign of the sun on her skin, her dark hair and pale complexion make her at times seem almost one of the Forsaken, this perception is reinforced by her almost languid manor when encountered at home, in addition to her occasional choices of dress. Occasionally she dresses in classic Sindorei finery the hands of her own works, at home she is also often found dressed in a worn tattered white robe which hangs upon her like a shroud during those periods when she is at her state of near total distraction, talking to family members who are not there, or worse occasionally answer with a slight breeze, a ratttling of cups, or a distant moan. There are none alive to remember that this is the robe she wore at the fall of Quel'thelas and that the bloodstains remaining on it were those of the last two guardsmen who gave thier lives at her defense, Droinas and Haran, whose names she sometimes still calls out to when she is alone. When encountered abroad she avoids the sun as much as possible, preferring the cool shadows of night.

Typically she prefers to hold to an aloof and haughty stance before strangers, despite all that has happened, she still considers herself a noble of Quel'thelas and expects at least a modicum of deference from those born to a lower station. The more busy she is the more lucid her personality. During moments of inactivity or solitude, her inner emotions come more closer to the fore, especially when she is at home in the ruins of Evenweave Manor.

As per tradition she is loyal to her nation, and by tradition that means the House of Sunstrider. Any talk disparaging of the King and his current policies is beneath her notice and will be quickly moved to another topic. She has nothing but scorn for those Quel'dorei who in her mind have deserted thier land in it's greatest time of need, and have chosen to dwell within the lands of their betrayers.

She is somewhat at a loss on the other races of the Horde. The Windrunner clan was known for a respected if somewhat roughhewn image and she respects the Forsaken as the followers of Sylvannas Windrunner. She is having difficulties with the concept of Orcs and Trolls as allies. She is bemused by simple child-like world-view Tauren and contemplates the usefulness of having one or two as personal guards.

Of the Alliance she takes almost no notice of save sharing her people's anger towards the Humans and the Night Elves, the latter she views as barbarian peasants who wronged thier betters, and believes that if for no other reason, supporting the Horde is her people's best chance at reclaiming what was and is... rightfully thier place in Kalimdor.

Recent events have given her a crisis in confidence as the name of Kael'thas has been cast down even by those who were placed as his regents. Confronted with unanswered accusations of the crimes laid at Sunstrider's door, she also knows that she gave her word of honor to his allegiance when all else seemed lost, and she is keenly aware that her word as a Noble is one of the few things she has left. For now she has chosen to avoid the issue entirely, concentrating on actions she believe will benefit her nation and honor the spirit of the vow she took that night.

Evenweave Manor itself is in a state of disrepair, bereft of it's mortal staff and the failure of the orreries that drew thier power from the Sunwell. At various places demonic crystals have been installed in the Manor, but most of the once grand house has been left to the growing dust and silence.... and the occasional spirit that dwells within. Evenweave Manor is shunnned as haunted by most of the present residents of Tranquillen... even the Forsaken.

At the present time, she has left the manor to the care of her (nonexistent) staff and is traveling abroad on a self proclaimed holiday having decided to visit the up to now, forgotten continent of Kalimdor, her preferred abode being within the Splintertree outpost in Ashenvale

Joined by arranged marriage to her third cousin Lord Tharlan Evenweave, Arlessa's role as Lady of the Manor was fairly typical. She managed the household, took up creative sewing as a hobby, and took some very casual instruction in minor magick, mainly to make better use of the power the Sunwell provided to all of the elves of Quel'thelas. It was by all accounts a successful marriage even producing a rare bounty of twins, Ardala and Nerathas. She raised her children, managed her Lord's entertainments and had a settled place in an old (as most Quel'thalan families were) and settled hierarchy in a community that had a more sedate place than the northern metropolis of Silvermoon. This had been disrupted during the war with the Horde but she like the rest of her people were confident that the worst of times was far behind them.

They could not have been more wrong. The southern areas of Quel'thelas were laid wide open by Dar'khan's treachery and the Scourge mass moved effectively unopposed through most of the southern half of the Blackened Woods. Lord Tharlan led the House Guard in defense of the Manor but for the most part the Scourge thrust simply swept past his forces on it's way to the Grove of the Sunwell. Overwhelmed Tharlan and his fellow defenders joined in the decision to burn the forests and leave as little as possible a victory for the Scourge to claim. Sending most of his guard home to defend the manor. Tharlan and his mages waited until the last moment before destroying both themselves and thier combatants with thier last strengths in a firey explosion.

The Fall of the Manor[edit | edit source]

Lady Arlessa invoked all of the House's magical guardians and defenses as she prayed for the safe return of her husband and the hope that her children were safe, having gone on holiday to visit friends in a social gathering for youngsters in nearby Tranquillen. What she did not know was that the returning guard sent by her husband had already been overtaken and were now coming back to the manor... as soldiers of the Scourge. 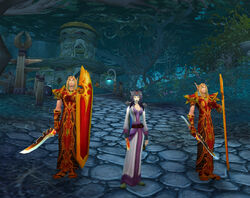 In the dimming light, the uniforms they wore gained them passage as House forces for a few moments, but those moments were enough as former guard turned upon guard until only two remained, Droinas and Haran the senior Guardmasters. Gathering her resolve she joined them at the last defense, commanding the House magicks and they held the line... until the energies of the Sunwell powering those defenses faltered, and then stopped forever. While Haran shielded both with her body, Droinas picked up his Lady and shoved her an opening that had been prepared for such a contigency after the last war and pulled a lever that triggered a minor deadfall, a collapse meant more to hide the entrance than blocked it. Moments later the last of the Evenweave Guards lay broken on the soil, having fulfilled thier duty.

The fall into the hidehole had become a plunge to oblivion as Droinas' abrupt move had unintentionally resulted in knocking Arlessa unconcious. That accident however may have saved her life as the Scourge who had killed her protectors became distracted and moved on before thier search for more to slay reached her hidden position. She woke.. to a day that was still night, and a growing certainty of loss... and a growing hunger inside unsated by the food she forced down her mouth. She knew her Lord was not coming back, and her despair magnified when the days turned to weeks with no word of her children save that Tranquillen itself had been all but eradicated during the attack. With smoke filling the air from the burning forests, she made her way first to Tranquillen and then was forcibly sedated and evacuated by the surviving army. Bereft of family, place, and future, consumed by an unsatisfied hunger, she withdrew into herself to wait for the end.

Coming of the Sun[edit | edit source]

One day those who had taken upon themselves to be handlers of Arlessa and many in a similar state, coaxed and cajoled them to a meeting which would prove to be a turning point. Grand Magister Rommath had come with the new teachings, as the Herald of the Crown Prince. giving the new King's decree that they would now name themselves and those that would come after in honor of the blood of the fallen, to be known as Sin'dorei. Those teachings included the new means of feeding the growing thirst for magic which had already resulted in a shocking number of the survivors degenerating into a new crazed form that would become known as Wretched. Arlessa drew herself up, mustering the dignity of a noble for the first time in weeks, and pledged her loyalty to the new King.

Taking in a new drive for education and self-improvement, fueled by a burning drive for vengeance, Arlessa submitted herself as to a Mage's apprenticeship only to fail disastrously as the talent for wizardry failed to make itself known. Happening upon a book of lore concerning the Burning Legion, she learned of another path to power, and she took it without hesitation.

For the last few months, she had joined the Skull and Bones Society, but for the most part she has pursued her own course. Recently the breakup of the Society has put her on an independent course. She has not given up the search for either her children, or her vengeance.

Retrieved from "https://earthenring.fandom.com/wiki/Arlessa_Evenweave?oldid=32727"
Community content is available under CC-BY-SA unless otherwise noted.