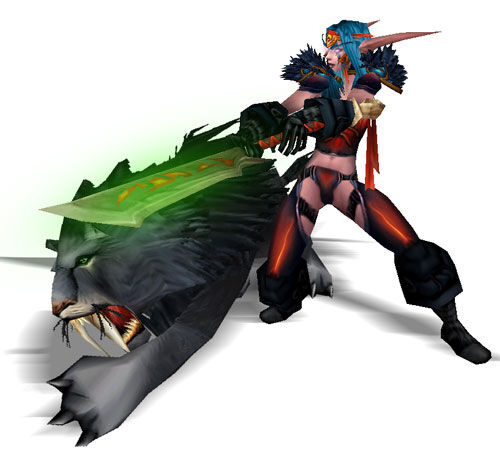 Aphotika is, by all accounts, an orphan.

She never knew the mother that bore her, nor the father that sired her, they were lost to her in an age before memory. It's possible that she was lost to them as well, or worse, abandoned by them. In any case she doesn't think on them much, and indeed, what reason would she have to? While she is sometimes curious about her origins, she is not one to dwell on the past, and this is due in no small part to her unique upbringing.

Instead Aphotika counts her "first family" as those that raised her from the time she can remember, a time when large sabercats still roamed the wilds of Ashenvale. It is a pride of these cats which she was accepted into and nurtured by as an infant and through part of her teenage years. She did not have names for the individuals of her pride (though her "second family" gave names to the most prominent members), knowing them instead by smell, size and mannerisms, but she considered the alpha male and female of the pride to he her mother and father, and the other members among her brothers and sisters, when she would later learn to speak, she would still use these terms to describe her closest comrades.

Much of her personality comes from these times. Like her feline foster family she is very much feral- preferring direct confrontations to wordplay, and acting on intuition before planning and contrivance. Might makes right, and it is important to know your place in the scheme of things, or if not, to be prepared to earn a new place by force. The rest of her teachings focus largely around the importance of the group, and the contribution of each member. Aphotika is therefore, very much a social animal- she needs her brothers and sisters, and it is very important to her that she do everything to help them as well.

Once she had reached thirteen seasons, things began to change in those timeless forests of Ashenvale. It was at this time she first met the Druids of Dor'Danil, the first of which who had not long ago awakened from their milennia slumber at the call of Tyrande Whisperwind to defend their homeland from impending doom. It was as the Danili Druids set about the work of making their domain once again livable that they first noticed a wild female Kal'Dorei child shadowing their every movement, waiting at the darkest edges of their fires and slinking at the periphery of their seasonal rites. It was through these first few meetings that the Druids dubbed her Ei'ffotico (Aphotika)- a name meaning "without light".

At first they thought her to be some sort of animal spirit taken on elvish form, for she seemed to disappear with a preternatural speed at any attempt by them to approach her. Thus it was that they left her be, assuming that when this spirit deemed it time to come in contact with them, she would. And she eventually did, due in no small part to her burning curiosity as to who these strange creatures were who looked so like her and walked on two legs. It was during those first ephemeral encounters with Apotika that she learned a smattering of their ways and their language, a variation on the druidic language they called the Tier'Danili. The Druids began to think less of her supernatural nature, but considered her presence at rites to be a sort of a good omen.

After all, they well knew the great beasts she ran with- they had long protected the glade at Dor'Danil from intruders, and the Druids were all the more thankful for their presence. They saw Aphotika as a sort of emissary, and welcomed her presence.

Not long after the Druid's awakening, strange green, brutish creatures began to creep through the forests of Ashenvale as well. They came with their blades and saws and set about felling the great trees of the forest. The Druids knew them as the Warsong Orcs, but both they and Aphotika's pride came to know them as mortal enemies and a dire threat to their way of life. At first the Druids resigned themselves mostly to avoiding the Warsong, feeling the time to fight had not yet come. Aphotika and her pride would not take this invasion so lightly. They fought the Warsong, tooth and nail, and so it was that the Orcs first turned their wrath upon the last great cat clan of Ashenvale.

Aphotika's clan fought hard and vicious, but were of course hardly a match for the Warsong and their machines and artillery. Aphotika lost her foster father in some of the first of these skirmishes, and the majority of her pride was forced into hiding. But this would not last long, for the Orcs had tasted blood and would not rest until they had drank their fill. The last of her pride was exterminated from Ashenvale when the Orcs at last found their den. Her pride, which was by now missing their strongest male, was driven from their den, herded into a box-canyon and slaughtered mercilessly.

It was one of the younger Danili Druids who came upon the blood-stained valley the following day while gathering seeds and roots. Under the lifeless body of Aphotika's foster Mother, whom the Druids called Yn'Fawr Heliwr, they found their spirit, perhaps not so supernatural as they had thought, but still breathing. He brought the child immediately to his elders, where the faint spark of life left in her was rekindled.

Though they knew her to be more flesh than spirit now, the Danili Druids still found it miraculous that little Ei'ffotico should survive such a carnage. It was whispered among the Danili that perhaps, like the cats she ran with, Aphotika may have nine lives to live. The tended to her with their craft, healing her body of every wound it had suffered in that terrible onslaught, but it would still be many days before she came to.

As for Aphotika herself, the child had suffered through such a trauma that she did little more in her first several weeks of consciousness than cower in a corner of the lodge she'd been placed in and startle at every unfamiliar sight, sound, smell or person. Though she was already familiar with these two-legged creatures, their ways and purpose were still unknown to her, and now, finding herself in the very center of their place of dwelling instead of on the outskirts of it, she was terrified.

Selyf Valefall, an advisor to the sect's elders, attended to the child personally, seeing that food, water and clothing were provided to her. He was patient with her, never approaching closer than he needed to in order to offer her things. He endured her snarling and growling with a decided attitude of calm, making every effort to show he meant no harm. He could sense the dark miasma of images floating never far from the surface of her consciousness, he knew that each night when she slept she dreamed of that bloodied vale, watching her loved ones murdered again and again.

Soon the warding snarls and growls of the child grew less dire as the youngling began to understand his routine. She still kept a respectable distance, however, deigning to accept his offerings only once she was certain he had departed the doorway. Selyf found humor in her innocent naivety as well. The child had never slept in a bed, or worn clothes. And his offering of the latter was put to use by little Aphotika for the purpose of the former, she used the fur clothing he had provided her with for bedding and slept upon the floor, while the bed itself remained unused and unoccupied.

Food, as one would expect, she well knew what to do with, and Selyf found the child to have quite a ravenous appetite. Once she was certain nothing was ill about his offerings, she ate heartily, and if nothing else, Selyf took this to be a good sign. Each night he saw that a guard of Brothers kept watch on her hovel from the outside, to be certain nothing happened.

In the meantime, the Danili held a great moot to discuss recent happenings, the visitation of the little blue-haired spirit was among the orders of business, it had nearly been two moons since she had been brought among them, and many among the sect were struggling to understand what her coming meant, and indeed where she would fit within their communal group. Selyf, who had worked most closely with the child, advocated patience- the child was still mistrustful, and well she should be.

Among the triumvirate of Elders that led the Danili, only Uthil Mooncall expressed misgivings regarding her presence. He feared that by sheltering the child, they may yet endanger themselves, that the Warsong may become aware of her presence among them somehow, and visit their next bloodlust upon Dor'danil. Only the thunderous voice of Mavoris Cloudbreak, greatest among the Danili elders, brought the ensuing verbal clamor to a halt.

Patience was called for by Selyf, and so patience they would provide, said he, whatever else the child may be, she was also Kal'dorei, and deserved that much. If there were risk in it, then so be it. Mavoris further placated the moot by announcing that he had sent word to the Silverwing of the Warsong incursion. The Sentinels would act as a buffer between the Druids and danger, as they had for thousands of years. The child, in the meantime would be provided every consideration due her.

And as Mavoris' pronouncement regarding their little spirit resounded in the circle, a great hue and cry was raised up from the lodges- Ei'ffotico was missing.

Those younger brothers set to watch her couldn't quite explain how it was that the child had slipped past their notice. She had been there one moment, and missing the next. Some feared for the child, some for what might happen if the Orcs discovered her once again. Selyf remained calm, seeming to have a knowledge and insight into the child the others lacked. He urged them to be patient once again. The child would return. 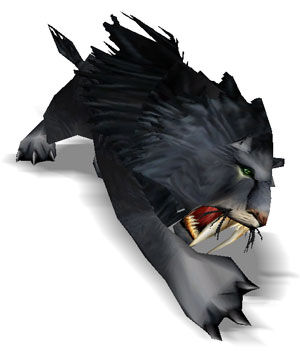 Herein may be found a list of stories concerning Aphotika:

A space for related but arguably OOC information regarding Aphotika.

Aphotika ah-FAH-tee-kah - A play on the Latin aphotic, which means 'without light'. Admittedly many of my Night Elf names refer to darkness or night in some way.

Aphotika was my second character, and my first to be played extensively enough to reach sixty. I had widely played her as a sort of character seemingly out of a Tarzan-esque universe. Some of my visual inspirations for her character came from the work of Frank Frazetta.