Anansi, Speaker for the Spirits 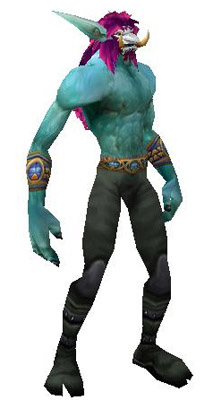 Nickname: The Walker, Walker Between the Worlds, and Anny

Title: Bad Boy of the Barrens

Garments/Armor: Black leather pants and boots, plus the Bindings and Cord of the Elements while usually wearing no shirt

Anansi's personality is rather mercurial in nature. Most of the time, he comes across as someone who enjoys life a great deal more than most. Other times, he seems distracted and mutters to himself when looking over his right shoulder as if he's having a conversation with others. Also at times, his wisdom and insight into situations come through his humor which sometimes even seems to surprise himself.

His command of spoken Troll is flawless, but his understanding of Orcish is extremely flawed. Most notable is his misunderstanding of first-person pronouns and other frequent grammatical errors. It is almost as if he has too many other things to worry about than learning proper Orcish.

Recently, his musical releases and Azerothian fame for being a singer of great renown has put pressures on him he hasn't had to deal with before. One of such pressures is the attention of females for all different races - Horde and Alliance. Having never dated before this sudden fame, he honestly seems to not know what to do when approached by a flirtatious female except for be himself. It could be that many spirits are helping him write his songs.

The Troll Shaman known as Anansi has only recently started bearing that name; before then, he was simply known as Shaman.

Since the Witch Doctor communicated his vision to the tribe and to Sen'jin himself, the tribe stepped in and the child with no name was called Shaman until the ancestors could choose a name for the young Troll boy. Over time, the child's tutors came from all the walks of Darkspear life - the Warriors, the seamstresses, the Priests, the Hunters, the Rogues, the cooks, the healers, the other Shaman, the Mages, but most of all - the ancestors themselves. Each of these groups had a hand in raising and forming the child, but it was the ancestors that truly had an affect upon the boy.

Time doesn't mean much to the ancestors since they have an eternity to do what they need or want to do. The ancestors promised to grant the child a name while he was still young - unfortunately since time doesn't pass for the ancestors in the same way it does for the living, the ancestors didn't grant his name for many many years. At a young age, the child learned patience, but the spirits can also do things for their own amusements and upon a whim. The child began to adopt this outlook as his own. They told the child stories of the past and others that the spirits wished they could have fulfilled before passing on. These stories, coupled with those of the living tribe members created a hunger within the child for knowledge, stories, and the interacting with many different people.

It was around this time that the Darkspears joined with Thrall, the war fought alongside what came to be the Alliance against those who would destroy the world to make it their own, and the birth of the Horde.

As he approached his middle teenaged years, they began to tell him more about the outside world. From the Warriors, he heard stories about the noble Human and Dwarf Paladins fighting together with Thrall's forces to defeat the Burning Legion and the Scourge. From the Priests and Shaman, he was taught to respect the gods, the elements, and the land. From the seamstresses and cooks, he learned that even the simplest jobs are important to the whole. From the healers, he learned how kindness and compassion can heal even those wounds that are within one's soul. From the Mages, he learned to respect magic in all its forms. From the Rogues, he gained (although many weren't happy with this within the tribe) as sense of derring-do, of getting into trouble and getting right back out of it. From the Hunters, he learned to love and respect the creatures that live on Azeroth.

The ancestors taught him a little over time, but they mainly had the child communicating things they needed or had him actually doing the tasks they themselves weren't able to finish in life. Within these jobs, the boy began to take on the various personalities of the spirits and the roles he fulfilled for the spirits: helpful, mischievious, comforting, to respect fear but never give into it, and most of all, his sense of humor.

Finally upon his 18th birthday, the ancestors gave him his name - Anansi - but for reasons that only they themselves gave him. Upon his 20th birthday, the word came down from Vol'jin that they needed the Shaman named Anansi to come up and serve the Horde. Since then, Anansi has explored the world, telling his stories to the ancestors and those who would listen, helping the ancestors do even the smallest things, such as singing a song to their child so that they could teach it to their own children - such actions tend to give rise to Anansi's giving such gifts to Horde and Alliance.

The mischievious nature of the ancestors still comes through in the pranks he pulls - although the ancestors do not like when he pulls his pranks upon them.

Retrieved from "https://earthenring.fandom.com/wiki/Anansi?oldid=31469"
Community content is available under CC-BY-SA unless otherwise noted.