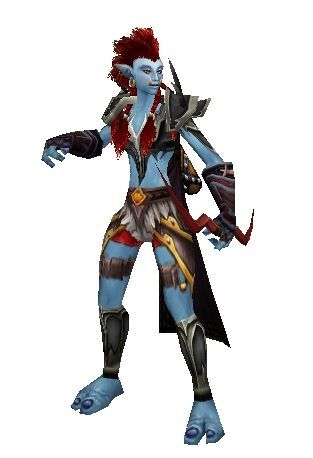 Akindi grew up in a small village near the jungles of Stranglethorn. Her parents had died defending the village from a murloc raid so she and her younger sister Ketsuki were raised by their maternal grandfather Kajee'ki. Akindi showed an aptitude for being a hunter at a young age and Kajeeki kept her around to train her in the ways of the bow and the beasts. Her sister Ketsuki showed a surprising aptitude for magic, and was sent to a larger tribe to train with the mages there.

Akindi had been promised to marry Ol'juk on her naming day (though she would have much preferred to marry his older brother, Tum'juk). The spirits had set a different path for her, however, and she had a vision telling her to leave her people behind and go out alone into the world. She obeyed the spirits, and spent the ten years living in the wilderness with only her pets as company, mastering the ways of the hunt.

When Thrall raised his army to free the orcs and head west on the great ships, Akindi was one of many Darkspear trolls that joined the Horde. She's quite proud of her not-inconsiderable role in the fighting and often refers to Thrall as a close personal friend (though that might be a bit of an exaggeration on her part).

When the Horde settled in Kalimdor, Akindi joined the other trolls in setting up the village at Sen'jin. The spirits had relaxed their prohibition somewhat and she took a tent there, though she was always careful to leave town when her cycle came around, and took no mate. It was in Orgrimmar that she met with Hapa and Hondo, the then-leaders of the Broken Horn Warband. They were interested in finding a cure to the plague that had swept Azeroth, and were gathering people from every race and background to try and pool the different abilities into finding a cure. She moved to the Spirit Rise of Thunder Bluff to be closer to her new tribe.

When Akindi was thirty the spirits finally relented, and she took her old battle-comrade Bishmi as mate. The two have been deleriously happy together ever since and had two strong children together, Akishmi the mage and Ajeera the warrior (named after Jeera, Akindi's mother). Bishmi is a loyal member of the Horde's armed forces and Thrall often sent him away for years at a time as the children were growing up. Akindi was quite shrill about it, and was for a time a persona non gratta in the Valley of Wisdom. Akishmi was killed by Saltalas, a malicious posessing spirit that was eventually defeated by the Broken Horn and the Grey Tiger Tong together. Akindi has one grandchild, A'rok, from Ajeera and Nerrok. She has a neice and nephew (Ketsuki's children), Zozo and Aeno, who are 10 and 12 respectively.

Akindi is technically posted on duty in Northrend but her grasp of rules has always been a bit weak and she often goes AWOL to take care of business in Azeroth. She sees her family often and is always willing to ditch a raid on Hellfire to help the other young ones in the tribe in their own missions.
Akindi used to be accompanied by her massive albino jungle cat Claw, who she raised from a kitten, but he is getting too old to fight these days. He now prowls the jungles of Stranglethorn. Akindi's current pet is a huge rhinoceros called Rush.