( This will be a collection of stories, anecdotes, and shorts from Thienal's very long past and may have some ties into his present life if I come up with something that fits in both. This gives me something to do since I've been wanting to write about Thienal for a while, but haven't been able to get anything going. For most of his current life, he plays a supporting role (though sometimes a major supporting role) in other people's plots, but has little direction of his own to go in. I'm hoping that by writing down bits of his past, I can have inspiration for some forward direction for him. Thank you.

I will add rough dates in when I get the chance. ) 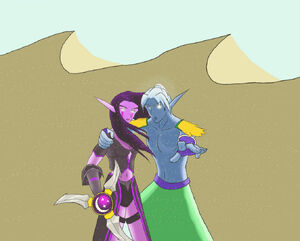 The buzzing sound caused the druid to look up sharply from his ministrations. The Sentinel laying before him also turned her head. Her wound, a nasty gash across her left leg, had mostly healed thanks to the druid's magic. But the buzzing heralded the arrival of several silithid crawing over the rise. He couldn't spend any more time healing her. Not unless they both wanted to become food for the Qiraji.

The druid stepped back and offered his arm to the Sentinel for support. She took it and climbed to her feet. She tested her wounded leg and found it healed enough to allow her to stand. Sentinel and druid exchanged a grim glance with each other, then looked back at the Qiraji on top of the rise.

"There are too many for us to take alone," the Kaldorei woman muttered bleakly, raising her Moonglaive defensively, "We will get overrun."

The druid's eyes narrowed. Such was always the way of the Qiraji. They attacked in swarms and numbers so great it was difficult to stand against them. Worse, the swarm stood between the two elves and their closest sanctuary. The druid glanced back over his shoulder. The mountains were not far off. And beyond the mountains, the crater. The beasts of the crater were fierce, but he could deal with them better than he could handle the Qiraji. His silver-eyed gaze turned back to the Sentinel, his face set in determination.

"Then we will retreat," he said quietly.

"We'll be cut off," she responded hastily, shifting her stance as the Qiraji on the ridge gathered for their assault.

"We can always make our way back," the druid responded, "We will be no help if we die here."

He wrapped an arm around the Sentinel's shoulders and raised his other hand, extending it toward the swarm. He sent a silent request to the world, and the world responded. The air pressure changed abruptly and a strong wind surged through the expanse between the elves and the silithid. The furious wind picked up the sand and hurled it through the air, filling the desert with a thick haze and a dull roar.

"Quickly," he urged, taking the Sentinel by the arm and pulling her behind him. Despite her leg injury, she managed to keep up. She gritted her teeth in pain, though, a sign that she fought hard to keep up with him. The druid admired the woman's strength, but kept going. Ahead, the edge of the crater came closer and closer, yet it still seemed so far away. He couldn't hear any sounds of pursuit over the howling wind he summoned. He silently prayed to Elune that the sandstorm foiled and confused the Qiraji. He pleaded the goddess to let them reach the crater safely. Then, he thought no more and simply ran.

"How do you feel?" the druid asked, kneeling beside the Sentinel. The Kaldorei woman blinked a few times, adjusting her eyes to the greenish jungle light before she propped herself up and looked at the druid.

"I'm all right," she murmured, looking around. Her pale, glowing eyes narrowed in confusion. "Where are we?"

"The crater jungle," the druid responded, "The Qiraji refused to follow us here. Unfortunately, you collapsed right when we reached the threshold. I carried you down here."

The Sentinel started slightly, as if becoming abruptly aware of her surroundings. She turned her head slowly to take in the scenery. Lush, vibrant trees reached far overhead with their branches, masking the sunlight. She and the druid sat on a patch of soft moss, nestled in a niche along the stone of the crater's edge. With a soft sigh, she laid back down and rubbed her eyes.

"Twice today, you have saved my life," she opened her eyes and looked at the druid. "Thank you, brother."

The druid nodded. When he found her in the desert, she had been unable to move, due to her leg wound that she suffered fighting off several silithid. He stopped to help her, but another swarm arrived before he could finish. After she collapsed, he brought her down into the crater and finished the healing, using the vibrant energy of the jungle to mend her wounds.

"You should rest for a while," he urged her gently, "I have healed your wound, but I can't restore your strength."

Reflexively, the Sentinel reached down to her leg. She touched gingerly at the tear in her armor and then heaved a soft sigh of relief when she felt smooth, whole skin. She rested her head back against the soft moss.

"And when I've recovered?" she asked softly, eyes still closed.

"We need to cross the crater," he said, "And reach the eastern desert. If the Qiraji reached that close to the edge of the crater, I do not think we can return alone. If we can reach the east, we can regroup with others of our people and return to the battlefield."

The Sentinel did not respond. Before the druid had finished speaking, the woman had already drifted into slumber.

He stood, watching her sleep for a moment, then turned toward the jungle. He made a soft squawking sound and held up his arm. A pair of cockatiels fluttered from the forest, white feathers stark against the hazy green, and perched on his arm.

"Watch over her, my brothers," he whispered softly to the birds, "I will be gone a short while. Please watch her until I return."

The cockatiels bobbed their heads in understanding, and then flapped off his arm, perching on a small outcropping above the Sentinel's head. The druid smiled at the birds, and then his form shifted, becoming dark and avian, blue-black feathers spouting across his body. He stretched his wings, and took to the air, flying west, toward the Shifting Sands.

The Sentinel awoke to the misty jungle night. The dim light gradually brightened as her night-attuned eyes woke up. She glanced over and foundthe druid sitting near the mouth of the niche, facing out, over the jungle. A pair of cockatiels sat on a rocky perch nearby, quietly watching the druid. Beside the Kaldorei man, on the ground, were four wooden bowls. She recognized the woodshape make. He must have gone into the jungle while she slept, she realized, and gotten some wood for them so they could eat.

With a soft sigh, she pulled herself into a kneeling position, and then began to stand, tentatively testing her leg. It still hurt to stand, but the pain had subsided to a dull throbbing. Using the rock wall for support, she walked through the alcove, gradually placing more support on her wounded leg until she felt confident she could walk normally. The cockatiels chirped quietly, cheerfully, and watched as she tested her limits. She looked up at the birds and offered them a warm smile, then quietly walked over to the druid and placed a hand on his shoulder.

The druid started, waking up abruptly. He shook his head to clear the bleariness from his eyes, and then turned to look up at the Sentinel. A smile of relief flowed across his lips. "How do you feel?" he asked. The two cockatiels fluttered to a rock closer to the druid as he spoke, as if coming to greet his awakening.

"Much better," the Sentinel responded, sitting down on the other side of the woodshaped bowls and looking out over the jungle, "Thank you again, Brother."

The druid nodded and picked up two of the woodshape bowls, one filled with water, and another with fruit, and handed them to her. "Please," he offered, "Eat and drink. If you feel well enough, we might be able to leave tonight." He paused. He didn't want to push her, not when they had such a long trek to reach the other side of the crater, and still longer to get across the eastern deserts to safety. The journey would already be arduous. For someone only recently healed, it may be tougher. "If you feel we should wait, we can wait." He smiled gently at her.

The Sentinel took both proffered bowls and began to eat. She found herself suddenly ravenous, and it took a moment before she realized she had not eaten since the day before. She ate hungrily, devouring the fruit so quickly she barely noticed its freshness and sweetness. When she finished, she took a deep drink of her water, and then set the bowl aside. She sat for a moment, then tried to climb to her feet without support. She wobbled just slightly, and then planted herself firmly and took a few steps. Her stride came confidently, and she walked back to the druid, smiling gratefully.

"I owe you my life twice over," she said, "I am Elessa Starwhisper. What is your name, Brother?"

He stood, smiling, and spoke, "I am Thienal Moonshadow. It is an honor to meet you."