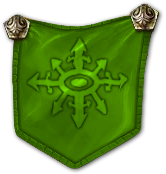 The Aegis of Olethros is an organization that recognizes several things in today's world: the difference between Order and Good, Chaos and Evil, as well as the need for balance in a time when the scales lean far in favor of order. First and foremost, while the Aegis associates itself with the Nether (Which is chaotic, not evil), the Aegis does not affiliate with the Burning Legion or subsidiary cults.

Viewable at the Visiter's Center in Stormwind City.

Retrieved from "https://earthenring.fandom.com/wiki/Aegis_of_Olethros?oldid=31975"
Community content is available under CC-BY-SA unless otherwise noted.